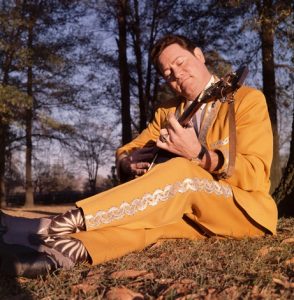 The walls of NOMA’s Great Hall are now a pictorial Hall of Fame for some of America’s greatest musical talents of the late twentieth century. From the mid-1950s through the 1970s, photographer Lee Friedlander was hired by a number of major recording labels to shoot album covers and publicity shots for a pantheon of top-bill performers. These vividly colorful and soulful portraits include such legends as Aretha Franklin, Miles Davis, Johnny Cash, Tammy Wynette, Lefty Frizzell, Ray Charles, and John Coltrane, among others. In conjunction with the exhibition Lee Friedlander: American Musicians, NOMA’s curators have put together a Spotify playlist of jazz, country, and rhythm and blues songs that launched these singers and instrumentalists onto the Billboard charts. A listening station with headphones will be installed at the exhibition in the near future.