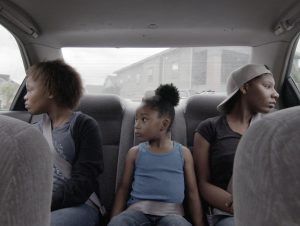 Scene from The Brother, a short film by Léa Triboulet.

Fragmented Landscapes/Beyond Acadia is a film series curated by Maaike Gouwenberg of Deltaworkers, a nomadic artistic production and residence program based in New Orleans that investigates the southern states of the U.S. as one of the last mythical places in the West. On four select Saturdays at 2 pm throughout the run of Inventing Acadia: Painting and Place in Louisiana, a series of short films will be screened under various themes.

December 14 | A Country That is Not of This World

In a rapidly changing Louisiana, the natural landscape becomes part of daily life. The fluidity of the marshlands that grow from sediment brought by the Mississippi from the north, and the human interactions that change the course of that natural process, are a constant reminder of our presence in—and impact upon—the area. Fragmented Landscapes/Beyond Acadia presents films that focus on landscapes—films that present the landscape as a way to communicate ideas about representation, where the medium of film is the key to examining the landscape in relation to political histories. The films are linked to human interference, painful pasts, and the rule of law. Filmmakers from Louisiana or inspired by the state examine themes of human intervention, painful pasts, and the rule of law.

The following films will be screened on January 18.

Phillip Youmans
Won’t You Celebrate With Me
3 minutes
Phillip Youmans (b. 2000) is an American filmmaker. He is the first African-American director to win the Founders Prize at the Tribeca Film Festival, which he received for his 2019 directorial debut, Burning Cane.

Ashley Teamer
Ze zegt zelf: 3 Part Horror-mon-ee
A journey through the emotional experience growing up in post-Katrina New Orleans. Repeating images of water, desperate basketball players, and nighttime highways creates a sense of impending doom that marked a childhood peppered with various hurricane evacuations. Amidst cryptic weather reports and ominous police scanners, 3 Part Horror-mon-ee is meant as a reminder of the invisible toll Katrina has taken on generations of young people in New Orleans. “My work is a manifestation of black female liberation,” says Teamer. “I transform WNBA players into super heroes searching abstract space for a new home that recognizes their greatness, skill, and perseverance.”

Ashley Teamer is a New Orleans-based artist whose work explores the complexities of black femininity through painting, collage, and animation. In both her visual and curatorial work, Teamer uses the object to inform and transform the gallery space. She has been an Artist-in-Residence at Diaspora Vibe Cultural Arts Incubator (Miami), the Skowhegan School of Painting and Sculpture, ACRE, and Ox-Bow School of Art. Her solo exhibitions include SneakerBoy Dreams, 4th Ward Project Space, Chicago (2017); The Writings On the Wall, Bruce Martin Gallery, Richmond, Virginia (2016); and Booty Galaxy, Joan Mitchell Center, New Orleans (2014). Her work has also been included in group exhibitions at Fort Gansevoort (New York), Antenna Gallery (New Orleans), and SOMArts (San Francisco), among other venues. Teamer received her BFA in Painting and Sculpture from Boston University in 2013.

New Orleans Sci High School
Like a ship without a sail
11 minutes
The story, written by Shane Brown (Class of 2020) and Directed by Da’Jana Florent (Class of 2021) is about a high school senior named Isaac who tries to handle the pressures of trying to graduate while dealing with homelessness, absent parents, and legal trouble due to his gang activity. The story starts with a flashback of one of Isaac’s ancestors, Abraham, a runaway slave desperately trying to find fertile soil to plant a seed for the Protea flower, a flower native to the African continent and the last remnant of his homeland. By the end of the story, Isaac learns their hidden strength inside him that has been passed down through generations of oppressed African people in America.

In Spring 2019, the digital media department at New Orleans Charter Science and Math High School under the leadership of film teacher and filmmaker Mr. E’jaaz Mason created a short film called ‘Like A Ship Without A Sail’. The film was entered in the 2019 LA Film Prize Jr. film competition. The film won Best Film, it’s lead actor Lawrence Kagler (Class of 2019) won Best Actor, and the crew took home $8000 in total prize money. The film project was featured as the cover story in the Living section of The Times-Picayune and NOLA.com. The students involved were also featured on a televised interview on WGNO’s News With a Twist in October 2019.

Jacob Dwyer
Donovan Garcia
8 minutes
As a voice from behind the lens attempts to document a trip to the Jean Lafitte National Park, the presence of another man, whom we’ve been told is with us, comes into question. His name is Donovan Garcia. Who is he? Does he even exist? Or is he perhaps just a device through which everyday behaviour is taken beyond its casual remit on account of being done by him. The work was produced whilst on residency in New Orleans at the Deltaworkers, supported by Mondriaan Fonds.

Jacob Dwyer (b. 1988) is an artist based in Amsterdam. His work has been shown in art spaces and film festivals including, IFFR (Rotterdam), IDFA (Amsterdam), BFI (London), BALTIC 39 (Newcastle), Galerie Juliette Jongma (Amsterdam) and Herrmann Germann Contemporary (Zurich). He has completed residencies at De Ateliers (Amsterdam) and Deltaworkers (New Orleans).

Léa Triboulet
The Brother
10 minutes
Three sisters go about their everyday life in the absence of their missing brother. Inspired by stories from New Orleans. Léa Triboulet (b. 1987) grew up in the South of France. After receiving an honors Master’s degree in scenography at the art school Ecole Supérieure des Arts Decoratifs de Strasbourg (France), she joined the international programme Film Factory in 2013, which was led by Béla Tarr in Sarajevo (BiH).
She has directed several short films which have travelled to film festivals worldwide. Her latest short film « The brother » (CNC quality prize) was selected for the Rotterdam IFFR, Clermont-Ferrand, Festival du Nouveau Cinéma de Montréal, Uppsala, Leeds, Hamburg, Sarajevo FF, Sarasota FF, New Orleans amongst international others.

Joining the North Adams annual Fall Foliage Parade, Cauleen Smith’s procession features a local marching band playing a composition based on the iconic notes from Close Encounters of the Third Kind and The Wizard of Oz, along with a color guard waving flags designed by the artist. With music by Jeff Parker and choreography by Anna Martine Whitehead, this activation is both a celebration and commemoration of the people who did not successfully rise above the violence and dehumanization of the modern industrial age.

Cauleen Smith (b. 1967) is an interdisciplinary artist whose work reflects upon the everyday possibilities of the imagination. Operating in multiple materials and arenas, Smith roots her work firmly within the discourse of mid-twentieth-century experimental film. Drawing from structuralism, third world cinema, and science fiction, she makes things that deploy the tactics of these disciplines while offering a phenomenological experience for spectators and participants. Her films, objects, and installations have been featured in group exhibitions.