Laura Dowling wielded “flower power” in the nation’s capital. In 2009 she was hired by First Lady Michelle Obama to serve as Chief Florist at the White House, a job that required equal parts stamina and finesse. From white-tie state dinner centerpieces to casual bouquets in the upstairs living quarters, for six years Dowling was charged with creating a signature style that would be both pleasing to both a family and representative of a nation. Dowling will join lifestyle expert and author James Farmer on March 16 as keynote speakers at Art in Bloom, presented by IBERIABANK, a showcase of spectacular floral designs created by over 100 exhibitors that will remain on display at NOMA for five days, from March 15-19.

Arts Quarterly editor David Johnson recorded a conversation with Dowling as her new book, Floral Diplomacy in the White House, debuts this month, offering a behind-the-columns look at working in the most high-intensity flower shop in the land, beneath the state floors of 1600 Pennsylvania Avenue between the East and West Wings.

I was a policy analyst and communications strategist long before I became a florist. So when I started working with flowers about 15 years ago, it was natural for me to use flowers as a communications vehicle. I saw how flowers could convey ideas and emotions to celebrate life’s milestones, in many cases much more effectively than words alone could do. Flowers became a way to change the way people felt and thought, focus their attention on important issues and elevate the collective mood and ambience to an inspirational level. None of my policy briefs could ever do that! 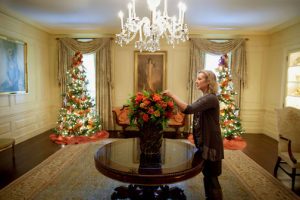 As a starting point, even the way I came into the White House job was significant and conveyed symbolic meaning. In 2009, shortly after President Obama took office, the Chief Florist position became open for the first time in 32 years. The new administration sponsored an open, nationwide competition — a highly unusual approach for a White House residence staff position. It’s well documented that these positions typically go to insiders or people with connections and political ties. I had neither. Nevertheless, I put my hat in the ring, sending in a résumé and cover letter — with the idea that flowers could be used as a strategic tool — never expecting to hear back. But I did, and it launched a seven-month interview process culminating in a reality-style television floral competition — a floral face-off — among three final candidates and interview with the First Lady. The symbolism of this competition was important. By opening up the floral position to all Americans, the administration emphasized an all-American theme — that what you achieve is not based on who you know or where you come from, it’s based on your talents and how hard you work.

At the White House, I thought it would be interesting to bring a strategic approach to the flower program. I was already inspired by the new administration’s message of hope and change and felt that the flowers could support this transformational message of collaboration and cooperation, innovation and hope. Flowers had been a fixture at the White House for over 150 years, but I observed that they were mostly a decorative backdrop, playing a purely aesthetic role. I wondered what would happen if you used flowers as a vehicle to strengthen key messages and support an inspiring policy agenda. It would be possible to highlight a broad range of themes – whether they’re environmental, by focusing on conservation and sustainability through choice of materials, or cultural, highlighting special flowers, colors and traditions of various countries, or even symbolic, emphasizing the intangible spirit of American style. If we took a new strategic approach to floral design, one that added a compelling and inspiring narrative to the designs, established an emotional connection, and captured the imagination of people, the flowers could go well beyond simple decorative placements to become formidable policy and communications tools. This is the idea behind “floral diplomacy.”

A typical day. My work schedule could best be described as intense and grueling — 16-hour days, 100-hour work weeks, seven days a week for six years. Early on, I understood that to make a real difference and to carry out the First Lady’s vision, I would need to put in extraordinary hours — and bring others in to work alongside me. Luckily, I had the stamina and motivation, as well as knowledge from my marathon days on how to pace myself, to work this schedule. My typical workday started at home around 6 a.m. with a check of my Blackberry to see what had transpired overnight or was already on the day’s agenda. After a morning run (a time to clear my head and come up with new ideas), I stopped by my favorite coffee shop to grab two large cups of coffee on my way in to the White House. I usually arrived at my desk between 8:30 a.m. and 9 a.m. By then, the basic flower shop routines were in full swing — the daily maintenance routines and flower deliveries throughout the White House complex – and I could check in with my team on any updates or issues that required my attention. This was a busy time of day, with meetings and new project assignments, impromptu visits and requests from West Wing and East Wing staffers, staff briefings and guidance for volunteers … with the phone always ringing in the background. 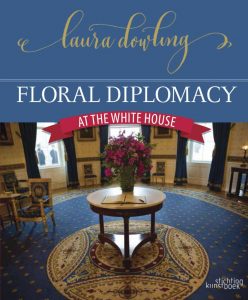 There were always at least ten different activities occurring at once, from administrative and management tasks — ordering flowers, managing routines, developing budgets and cost projections, creating work plans and staffing schedules — to creative jobs — designing bouquets, creating event inspiration boards, crafting design prototypes and organic containers, etcetera — involving a variety of different timelines and deadlines. For example, the planning for the White House Christmas was a year-round project that was an ongoing part of my daily schedule, whether it was initial note-taking and concept development in January and February, organizing the warehouse in March, writing proposals in April and May, creating prototypes and room-by-room plans in the summer to intense project management in the fall as we inched closer to the installation date. Other projects, including state dinners, governors’ dinners and major events like Fourth of July or Halloween, usually had a three or four-month lead time to plan and implement. In addition to decor plans, these complex events involved meetings about logistics, security and protocol requirements. Some events would be added to the calendar without much notice or lead time; we built these into our timelines and plans. In addition to the non-stop event portfolio, I managed the daily and weekly flower installations for the East and West Wing offices, state floors, and private residence — and even Camp David when the First Family decamped there for periodic escapes.

By midday, after the morning routines were completed, we turned our focus to that day’s events — setting up flowers and decor for luncheons, receptions, meetings or dinners that were taking place within the White House complex. Later in the afternoon, volunteers joined me to work on special projects — creating organic containers, intricate holiday designs and helping with general flower-shop tasks. It was also a time to catch up on emails and other administrative work as well as to complete the constant flow of bouquets that were part of my daily responsibility. At the conclusion of White House events, we would break down the event, removing flowers from the state floor or South Lawn, West Wing, or wherever the event was held, and return them to the cooler. The night shift continued until 8 or 9 p.m., concluding with a clean-up and sweep of the flower shop to get everything ready for the next day.

There were so many surprising and even amusing anecdotes that I can recall from my six year tenure … each day was unique and inspiring in its own way. For me, the most surprising thing was the surreal duality that is inherent in working at the White House. On the one hand, the position is surprisingly mundane — like working in any other flower shop. At the same time, there are breathtakingly magical moments — the interactions with the President and First Lady, the sight of Marine One landing on the South Lawn, visits from celebrities and dignitaries, from Justin Timberlake to the Dalai Lama, and the awareness that the flowers I’ve just placed become permanent style markers of White House history as well as silent witnesses to momentous discussions and events that occur on a highly visible international stage.

My best advice to anyone who is embarking upon a career change or looking to become a florist, is to embrace the power of possibility and to follow your passion — because you never know where it will ultimately lead. I never dreamed that it would be possible to go from being a part-time florist working out of my basement kitchen to achieving the Chief White House Florist position. But by setting my sights high, working hard, studying floral techniques and philosophy, and even just the simple act of putting my hat in the ring — entering the open competition to become the White House Florist — I was able to achieve the top floral position in the country, proving the point that anything is possible if you follow your dream!

Focus on the season. Take advantage of the pretty flowers that are available at the farmers’ market or even the grocery store. Arrange flowers that grow together in the garden: forsythia and daffodils, tulips and hellebores, hydrangea and ivy, etc. This time of year, a simple vase of flowering branches can make a striking and beautiful statement.

To get the most impact, focus on placing flowers in a few key areas in your home — where you spend the most time, wherever you need a bright spot. This is the way to maximize your investment in this affordable — but still a luxury — expense (e.g., on the door, in the entryway, on the dining table, on a side table, etc.)

Use monochromatic colors — varying shades of one hue. This is a great approach for creating drama and impact.

Build a base of greens as a base structure. This will help the flowers last longer.

Focus on the garden style look by arranging flowers in a natural, unstructured way by using layers of overlapping and swirling flowers and greens. This technique is most evocative of the garden. Create a structured bouquet using a base of greens with various lines and vines escaping and trailing down. This creates a sense of movement and liveliness,  but still gives you the sense of an artistic composition. Although the garden style doesn’t use a specific recipe, there are some guidelines for selecting flowers: