The works of art contained in NOMA’s galleries and the Besthoff Sculpture Garden depict the full gamut of human emotions — from love and compassion to vengeance and fright! In this season of the supernatural, prowl our halls and the shadowy outdoor paths of the sculpture garden to view scenes and objects that are guaranteed to give visitors the willies. Some works present less obvious but grisly and creepy stories beyond the frame or pedestal. Presented here are five selections from the permanent collection. 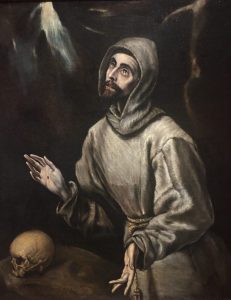 In Catholicism, saints are typically martyrs revered for their piety and devotion to God. St. Francis of Assisi (1182–1226), the founder of the Franciscan Order, was no exception. St. Francis is known for his ability to communicate with animals, as he described in his text, The Canticle of Brother Sun and Sister Moon. However, this text also has a much more sinister meaning. As shown in this painting, St. Francis is often depicted with a skull. This is because, in his Canticle, St. Francis also details his interactions with Sister Death. He believed that mortals should not be afraid of death, as it will bring us into communion with God. St. Francis is also known for the stigmata, or the wounds on Jesus’s body from his crucifixion, that spontaneously appeared on his body. In this painting by El Greco, St. Francis receives nail punctures on his hands while praying on the mountain of Verna in Italy during a forty-day fast. 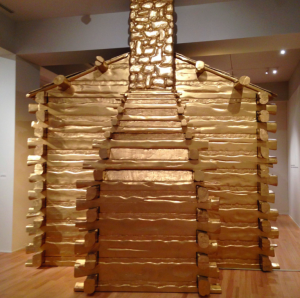 This gold cabin is a replica of the birthplace of Abraham Lincoln. The original is preserved in a shrine at Hodgenville, Kentucky, though its authenticity has never been confirmed. Lincoln’s presidency ended in tragedy as he was assassinated by John Wilkes Booth on April 14, 1865, a mere six days after Robert E. Lee surrendered the Confederate cause, officially ending the Civil War. There is evidence that Lincoln experienced a premonition of his impending murder in the months preceding his fateful trip to Ford’s Theater. According to Ward Hill Lamon, Lincoln’s former law partner and confidante, the president spoke of a dream that he could feel death all around him. He walked downstairs and saw his friends and family in mourning. He asked, “Who is dead in the White House?” and the group replied, “The President. He was killed by an assasin.” Some historians have cast doubt on Lamon’s account, which was published in the 1880s, but many residents and guests at the White House in the past 150 years have shared accounts of Lincoln’s ghost roaming the halls of the residence. 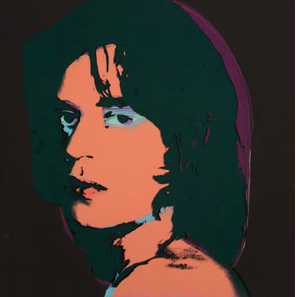 In the 1960s, Mick Jagger, frontman for The Rolling Stones, became friends with pop artist Andy Warhol. Both were part of the counterculture of that decade, and both became targets for crazed radicals. In 1968, a radical feminist named Valerie Jean Solanos, author of the SCUM (Society for Cutting Up Men) Manifesto, attempted to murder Warhol in his studio. The SCUM Manifesto sought to completely eliminate men, and Solanos’ turbulent past with Warhol as a model in one of his films drove her murderous desire. She shot him three times, with the final bullet piercing Warhol’s lungs, spleen, stomach, liver, and esophagus. He survived, and the saga was later made into the 1996 movie I Shot Andy Warhol. A year later, in 1969, The Rolling Stones held their infamous free concert at the Altamont Speedway. The band hired the motorcycle gang The Hells Angels to act as security during the concert. However, things went badly and a concertgoer, Meredith Hunter, was killed by one of the Angels. Jagger blamed the entire incident on the Hells Angels. The biker gang vowed to seek revenge on Jagger, and attempted to kill him in 1970 at his Long Island beachfront home by way of a shore invasion. However, the bikers’ boat, loaded with weaponry, was thwarted by a storm and the assassination was averted. 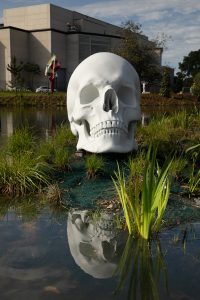 Among the most popular photo-taking spots in the Besthoff Sculpture Garden is Katharina Fritsch’s oversized skull, perched on an island within the lagoon. Fritsch is a German artist based in Dusseldorf works of oversized objects compel us to ponder large psychological issues that arouse distaste and even fear. One of her best-known works is a circle of huge rats, which quite clearly is meant to bring about anxiety. Schädel (Skull) was described by Jonathan Goodman in Noah Becker’s Whitehot Magazine: “Here the tradition of the memento mori in art takes over … The skull is both a demonstration of death’s awareness and a warning: art can never completely overcome our fear of endings, in this case ghastly ones.” 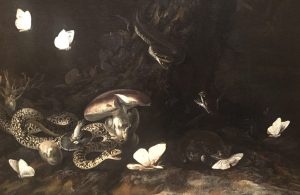 Dripping in creepy-crawlies, Serpents and Insects is practically a jump-scare of a painting, revealing a veritable witch’s brew of frightful creatures some of which only gradually come into view. With mouths agape, the serpents in the painting writhe around the foreground among mushrooms and moths. A toad devours a white-winged meal—perhaps before this unsuspecting amphibian too becomes dinner? Many of Schreik’s paintings feature nightmarish fauna that dwell on the damp forest floor: insects, frogs, lizards, and snakes. The Dutch Golden Age artist raised snakes in a vivarium behind his home. After multiple modeling sessions with his reptilian pets, these snakes became so tamed they would remain in whatever position in which he posed them. Focusing on the brevity of life, Serpents and Insects is a reminder of what may be lurking just underfoot.