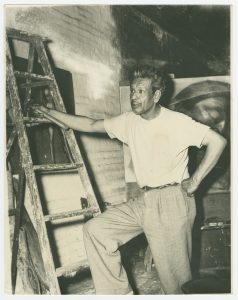 Created for the lobby of the New Orleans Times-Picayune building in 1967, Enrique Alférez’s plaster relief mural Symbols of Communication celebrates humanity and connectedness by showcasing the universal desire to share stories through language. A gift of Joe Jaeger, Barry Kern, Michael White, and Arnold Kirschman to the New Orleans Museum of Art, the mural will be centrally featured in the museum’s 2020 auditorium renovation, generously funded by The Zemurray Foundation.

In Symbols of Communication, Alférez weaves together characters and symbols that represent different forms of human language across many diverse cultures and histories. His mural contains Roman and Greek alphabets, Mayan glyphs, hieroglyphics from ancient Egypt, Arabic, Chinese and Japanese characters, and the dots and dashes of Morse code and Braille, among other symbols and sources. To create this mural, Alferez stamped a series of plaster panels with hand-carved wooden molds that form an interlocking pattern that aims to show the connections between and among the characters.

“Symbols of Communication highlights the power and importance of systems of communication, as well as the role that art has to play in helping us reach across cultures to connect with others,” says Susan Taylor, Montine McDaniel Freeman Director of NOMA. “In a time when communication and mutual understanding is more critical than ever, our hope is that Enrique Alférez’s mural will serve as a powerful reminder of art’s ability to unify and reflect issues of topical interest.”

Enrique Alférez is one of New Orleans’ most influential and important artists. Born in Mexico in 1901, he first visited New Orleans in 1929. He lived between Mexico and New Orleans until his death in 1999. He created more than twenty major public works—sculptures and wall reliefs in metal, plaster and wood—throughout the city. Alférez came of age during the political fervor of the Mexican Revolution, and grew up in a world in which art was deeply intertwined with politics. In the early 1920s, he was exposed to the work Mexican artists like Diego Rivera, Jose Clemente Orozco, and David Alfaro Siqueiros who made art a centerpiece of the Mexican Revolution. Like them, Alférez’s large-scale public artworks and murals advance progressive political views and shine light on social issues of the time—especially the importance of cross-cultural dialogue and exchange.

NOMA thanks Joe Jaeger, Barry Kern, Michael White, and Arnold Kirschman, for their generosity and community leadership. After purchasing The Times-Picayune building in 2016, the new owners recognized the artistic historical importance of the mural. Guided by their desire to keep the work in New Orleans and accessible to the community, they selected NOMA as its new home.

The auditorium complex renovation will create a flexible and contemporary space, designed to serve in multiple capacities, from theater in the round to a banquet space, lecture hall, and more. The renovation will provide NOMA with a state-of-the-art platform for interdisciplinary arts experiences and enable opportunities for expanded and new community partnerships, advancing the museum’s position as a nexus for the arts in New Orleans. The auditorium complex renovation will also include a renovation to Café NOMA, which is operated by long-term NOMA partner Ralph Brennan Restaurant Group. To learn more about NOMA’s Auditorium Complex Renovation, visit this link.