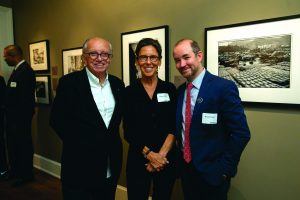 Del and Ginger Hall join Russell Lord, Freeman Family Curator of Photographs, at the opening of the exhibition Past Present Future in 2018.

Del Hall’s career in broadcast and print media took him from his home in New Orleans around the world. As an Emmy Award-winning news cameraman and film editor for much of the second half of the twentieth century, Hall pioneered the use of moving images on television news, working first for WWL in New Orleans followed by national and international assignments for CBS, and he applied the same perceptive and sensitive vision to take still photographs. Selections from his lifelong portfolio were on view in the 2018 NOMA exhibition Del Hall: Best Seat in the House. This year, Del and his wife Ginger added another facet to their impact upon NOMA. To inspire future generations of photographers, they have established a major fund to support the museum’s photography department. The couple spoke about Del’s career, their relationship with NOMA, and their hopes for the Del and Ginger Hall Photography Fund.

Del: As a boy, I lived at 129 Rampart Street and across the street was Reiner’s Pawn Shop. That’s where I spotted my camera, around the time I was in high school, that started my whole love for working with photography.

Ginger: Yes, from a little boy to this day he never goes out without a camera. I’m sure I’ll have to tuck one into the grave.

Del: As far as photography goes, and I tell this to Ginger a lot, I just can’t help myself. I don’t know why I do it. I just can’t stop. It’s a compulsion.

Ginger: In his career at CBS, if anything around the world was happening, Del was there with Walter Cronkite. So if the United States was opening up relations with China, Del was there. When President Nixon went to Russia, Del was there. When Juan Perón took Evita’s body back to Argentina, Del was there. When the prisoners of war during the Vietnam War were released, Del was there in Manila. I think that’s why we have such a great marriage. He was never around! Del was so busy, we never had time to examine what has now become his body of work, but we carried around a lot of his photos, including aerial shots of New Orleans from his days in the Air Force. One day we decided to contact Richard Campanella, a Tulane professor who writes about New Orleans history, to see if he would be interested in these photographs. He said, “You’ve come to the right person.”
[Campanella would write The Photojournalism of Del Hall: New Orleans and Beyond, 1950s–2000s, published in 2015.]

Del: As I said, I grew up in New Orleans, and I always loved the art museum. One day I was covering a school tour, and I took two snapshots that I really loved. One was of two girls in their little skirts looking at a modern abstract painting, but the other was a boy in pants, just barely covering his socks, and he was taking a picture of a nude down in the lobby. To me, these pictures just said everything!

Ginger: One day, without any advance notice, we dropped by NOMA and told the front desk attendant that we had these two photographs and we’d like to show them to the director of photography. I was expecting a response along the lines of “He’s too busy right now,” or “He’s in a meeting,” but Russell Lord came upstairs. Russell later told us that he always tries to meet with everyone because he never knows what he might find.

He formed a wonderful relationship with us. It just wasn’t, Oh boy, I’ve hooked a couple who look like they might have something to give to the museum! He nurtured a relationship that’s helped us grow and consider ways we might inspire others. …Not every child can take art lessons or buy oil paint, or even buy film like Del when he was a child. But now they have access to cameras on phones, and they can think of themselves as practicing the art of photography if they just have a little nudge. Russell, the director Susan Taylor, and the rest of the museum staff have come up with several ideas that we think would be a win-win. Although we know our gift will support every aspect of the museum’s photography program, we are particularly excited that it might inspire a greater love for photography in New Orleans by allowing the museum to bring in established and emerging photographers and curators to speak at NOMA. We look forward to seeing all of this and more.

Gallery of photographs by Del Hall