Movie buffs are invited to settle into NOMA’s Stern Auditorium over the course of five select Saturdays in November and December to visit the strange, dream/nightmare-like worlds of filmmaker David Lynch (View the schedule). Though he is best known for his works on the big screen and the quirky television series Twin Peaks, Lynch’s interests and inspirations extend far beyond Hollywood studios. Here are ten little-known facts about the man who has purposely remained a shadowy enigma in the most spotlight-saturated city on earth. 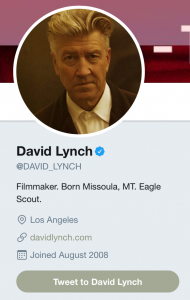 David Lynch was a member of the Boy Scouts of America and even became an Eagle Scout, the highest rank within the organization. Due to this affiliation, Lynch was present at the White House for John F. Kennedy’s 1961 inauguration, which coincidentally took place on his fifteenth birthday. Although after a period of time he “didn’t really think Scouts were cool anymore,” Scouting seemed to have an impression on Lynch. His Twitter biography only includes this information: “Filmmaker. Born Missoula, MT. Eagle Scout.”

Although best known for his work in film, Lynch was first trained as a painter, attending both the School of the Museum of Fine Arts, Boston, and the Pennsylvania Academy of Fine Arts. Lynch claims he first became interested in film because he wanted to see his artwork have movement. The characters who appeared in his first breakout film, Eraserhead (1977), were drawn from his never-finished 1971 art school project Gardenback, which was inspired by one of Lynch’s paintings. Lynch continues to paint, with works done primarily done in dark tones to enhance the “dreaminess” of his visions. He rarely uses color, which Lynch says is “too real” and “limiting.”

Lynch doesn’t just paint, he also drew a comic that appeared in the Los Angeles Reader from 1983 to 1992. “The Angriest Dog in the World” featured a dog that is so angry it refuses to move. The strip was introduced with a small caption, which read, “The dog who is so angry he cannot move. He cannot eat. He cannot sleep. He can just barely growl. Bound so tightly with tension and anger, he approaches the state of rigor mortis.” The angriest dog was accompanied by semi-existential quotes such as “this is as good as it gets” and “if everything is real … then nothing is real as well.”

A true renaissance man, Lynch has also dabbled in the music scene. Besides having Peter Wolf—of J. Geils Band fame—as a college roommate in 1964, Lynch also tried his hand at various musical exploits of his own. These forays included directing a concert for Duran Duran in 2011, releasing two studio albums—Crazy Clown Time in 2011 and The Big Dream in 2013 (watch the video below)—and composing music for a variety of his works including tracks in Eraserhead, Mulholland Drive, The Air Is on Fire, Inland Empire, and various Twin Peaks episodes.

In 2006, Lynch debuted his own set of cellphone ringtones featuring his recorded phrases such as “I like to kill deer” and “My teeth are bleeding,” and “What the hell? Damn! What the hell?” They are no longer available for download, but the recordings can be found on fan websites.

Lynch also markets his own eponymous brand of coffee. In an interview with Vice magazine, he said, “Coffee is part of the art life. I don’t know quite how it works, but it makes you feel really good and it serves the creative process. It goes hand in hand with painting for sure.” He also confessed to being a java addict, drinking up to ten cups a day. “I used to drink twenty. But they were smaller and in Styrofoam cups. Now I drink them in bigger cups.”

Lynch has directed various commercials, including ads for Calvin Klein, Giorgio Armani, Yves Saint Laurent, as well as more everyday products like Alka-Seltzer Plus, Barilla Pasta, Adidas, Playstation 2, Nissan, and Clear Blue Pregnancy Tests— in the latter, he forced the actress to actually take the pregnancy test on camera. Some of his more unusual commercials include a 1991 ad for the New York Department of Sanitation called “We Care About New York,” which attempts to address the city’s rat infestation issue, and for Georgia Coffee, which only appeared in Japan and featured a man searching through episodes of Twin Peaks, looking for his wife (watch the video below).

After the 1984 box-office failure of Dune, a science fiction dystopian movie based on the novel series of the same name, Lych attempted to distance himself from the film. Incensed by his lack of artistic control and denial of final-cut privileges in the editing room, Lynch—who both wrote and directed the film—asked that the cuts that included all deleted scenes mention him only as “Alan Smithee” in the credits as director, and as writer “Judas Booth,”pseudonyms he invented to express his sense of betrayal fly the studio bosses at Universal Pictures. 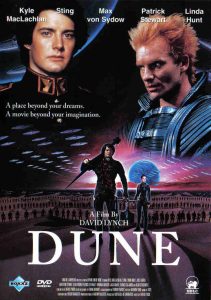 Although the Academy of Motion Picture Arts and Sciences nominated Elephant Man (1980) for eight Academy Awards including Best Picture, Best Director, Best Adapted Screenplay, and Best Actor, the Academy was criticized for failing to recognize the phenomenal makeup effects in the film. The following year, the Academy Award for Best Makeup and Hairstyling was introduced, giving future films and makeup artists the chance to be celebrated for visually impressive work.

David Lynch is frequently lauded by fellow filmmakers for several of his films. Stanley Kubrick said Eraserhead was one of his all-time favorite films. Mel Brooks was also a fan of the film, and embraced Lynch after a private viewing, exclaiming, “You’re a madman, I love you!” After the success of The Elephant Man in 1980, George Lucas—who was also a fan of Eraserhead— offered him the directing position in his final film of the original Star Wars trilogy, Return of the Jedi, which Lynch turned down.