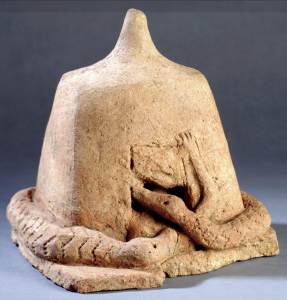 African art objects often carry vital information concealed within, hidden details made by the artist for spiritual purposes that are not visible to the viewer. Recent research into a Malian terracotta architectural model by a Djenne artist, circled at the base with serpent figures and currently on view in NOMA’s François Billion Richardson Gallery of African Art, provides an example of how science can enhance a deeper analysis of a piece of sculpture.

The architectural model with serpents is a square structure with a conical roof that sits on a flat base. Two serpents decorated with an incised zig-zag motif wrap themselves around the base of the building. Their heads meet at the partially opened door from whence a human hand appears in relief on the side wall. However, the gap between the door and the serpents, as well as a wide crack at the bottom of the structure, reveal a large mass covered in earth, probably “from prior burial inside the structure,” according to Kristina Van Dyke, an independent scholar and former curator at The Menil Collection in Houston. To pry open this mystery, NOMA sought a CT scan of the object from Scantix, a studio in Belgium that provides radiological scans of sculpture.

Dr. Marc Ghysels digitally peeled away the layered clay obscuring the forms. The scan revealed a “fascinating scene of carnage,” according to Ghysels, of eight elongated female bodies lying side by side. All are headless, and one figure inside the door appears to be pregnant. Her arm extends through the door to the wall outside. Ghysel’s hypothesis of ritual human sacrifice was later strengthened by Van Dyke, who supported the interpretation by relating the scene to an oral account of ritual human sacrifice among the Bida people of Burkina Faso.

Even if we accept the elongated humanlike shapes inside the structure as human sacrifices, it is also plausible to construe them as young females in a “fattening room.” This practice was historically common in many African cultures, where young women are secluded in a building, abundantly fed, and trained to become wives before getting married. If the fattening room hypothesis is upheld, then the figure that looks like a pregnant woman in a childbearing pose may actually be correct. In this interpretation, she is a practical model used in educating the soon-to-be brides about childbearing. Further research will cast more light into the exact meaning of this fascinating composition.

View the 3D scan built from the data collected during the CT scan study at Scantix. Read more about the process and look inside the terracotta model at this link.