During the sixteenth century, on the island of what was then known as Hispaniola (modern day Haiti), enslaved Africans from numerous ethnic groups such as the Yoruba and Fon formed a new culture in the Caribbean. Arising from a need to unify and communicate across these disparate peoples, the religion of Vodou (also known as Voodoo) was created as a blending of many traditional West African faith traditions. This religious practice played an integral role in the success of the Haitian Revolution (1791–1804) and went on to take different forms in the Americas such as Cuban Santería and Brazilian Candomblé.

Enslaved Africans in North America were often given meager rations of food from their white owners. These foods often included pork, cornmeal, sweet potatoes, and collard greens—and from these limited staples came recipes that would become known as soul food, which became one of the most venerable examples of American food culture.

In the early 1970s in neighborhoods of the Bronx populated by African Americans, Puerto Ricans, and Caribbean immigrants, block parties with mobile sound systems filled an entertainment void in an area that lacked formal performance spaces. On August 11, 1973, a Jamaican immigrant known as DJ Kool Herc hosted a party with his sister in the recreation room of their apartment building at 1520 Sedgwick Avenue. There he debuted a technique that involved playing two copies of the same record using a pair of turntables and switching between them to extend the percussive sections of the song (known as the break). This event and the debut of this new technique is regarded as the launch of hip-hop—a genre that recently surpassed rock as the most popular music style in the world.

The common tie between each of these pieces of history is the idea of remixing. This practice of recontextualizing existing materials and experiences has been integral to Black expression and survival since the beginning of time.

Whether in regard to his experiences growing up in his father’s church, or extensive reading of Marxist-related works, or his travels to India in 1959 to learn more about nonviolent resistance, the leadership and vision of Dr. Martin Luther King Jr. was also the product of remixing experiences and schools of thought. As we celebrate the legacy of Dr. King, I think this fact is one that is especially pertinent to our current moment in human history. I also immediately think of the work and methods of artist Fred Wilson and the ways they affirm the ideals exemplified by the man we honor with an annual holiday, including courage, identity, and social justice.

Fred Wilson is an artist born in the Bronx whose work includes sculpture, painting, photography, collage, printmaking, and installation. He is best known for the conceptual aspects of his practice which examine the art and artifacts contained within traditional museums and the ways that these objects are displayed.

Through the rearrangement of art objects from museum collections, he prompts viewers to consider the fundamentally inequitable and exclusionary foundations of these institutions. These “interventions,” as he calls them, challenge our assumptions of history, race, and culture, along with the relationships of these constructs to the display practices of museums. 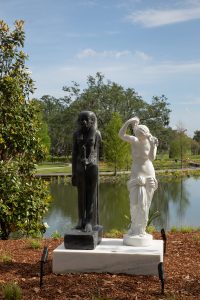 In Wilson’s work The Mete of The Muse, located in NOMA’s Besthoff Sculpture Garden, the artist utilizes the concept of juxtaposition to highlight the traditional prioritization of European narratives within museum contexts. In this sculpture, the contrast between an ancient Egyptian female figure and the figure of a Greco-Roman woman creates an easy access point for viewers to ponder issues around the ramifications of race and colonialism. Wilson’s ability to remix ancient materials and symbols to create new meaning perpetuates a practice that is evident in the work of Dr. King and enslaved Africans dating back to the 1500s.

As an approach, juxtaposition can be a simple way to spark dialogue between two contrasting objects, characters, or ideas. The occurrence of this within contemporary visual culture happens frequently in ways we may often overlook. In celebration of Dr. King’s legacy and the work of Fred Wilson, we encourage you to create and share an example of juxtaposition through the combination of two found objects or images from online and/or your immediate surroundings. Identify the themes that are being explored through your juxtaposition and discuss this with your friends and family!

Step 1: Identify an image or object that you love. This could be an image of a work by your favorite artist, an object in your house or apartment, or an image that caught your attention on Instagram or Facebook. Whatever speaks to you! If it is an object in your space, take a picture of it and if it’s something you find online, save the image.

Step 2: Think about the themes, ideas or messages expressed through your image or object and make note of them.

Step 3: Identify a contrasting image or object to your first. What might be considered a direct “opposite” of your first image and why? If a found image, save it and if an object in your space, take a picture.

Step 4: Consider what’s being explored through the juxtaposition of these two images! Do this independently or have a discussion with friends or family members.

If you’d like to collage the images like the side-by-side examples below (click each for a larger format), you can use free apps such as Pic Stitch or Layout to do this.