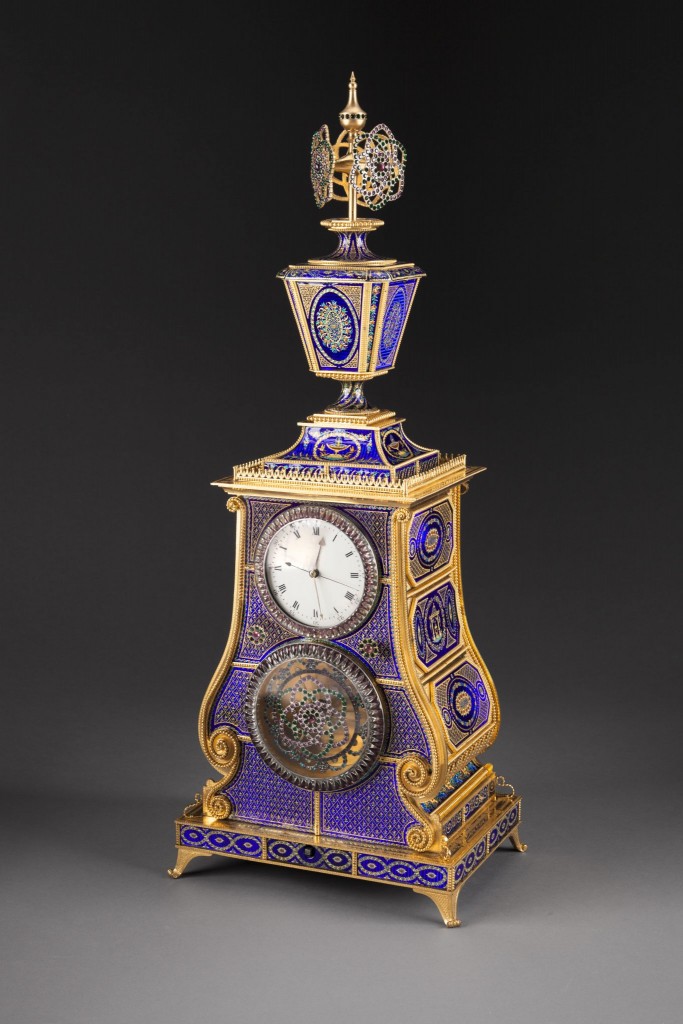 NOMA’s Automaton Musical Clock would have been viewed as a mechanical wonder when it was made in London around 1800, and its whimsical movement and luscious materials still charm today. In spring 2017 it will go on view in the new Elise M. Besthoff Charitable Foundation Gallery on NOMA’s second floor.

Our clock is a Katrina survivor. NOMA acquired it in 2001 as a bequest from the collection of Mr. and Mrs. Robert C. Hills. When Hurricane Katrina struck, it was undergoing restoration in a New Orleans repair shop. The disassembled clock was submerged in floodwater.

In 2015 the piece travelled to London for a meticulous, year-long conservation project supported by the Besthoff Foundation. Specialists stabilized the ormolu (gilt bronze) and enamel panels and, most critically, dismantled and repaired clockworks that had been corroded by dirty floodwaters. The restored clock can now keep perfect time, play a series of chime tunes, and spin its jeweled ornaments.

As part of the new installation, an ArtTab digital tablet developed by NOMA will show the clock’s movements and melodies as it strikes the hours. The ArtTab explores the specialized crafts of the clock’s body and inner workings, its recent restoration, and how such clocks were used as part of 18th century British-Chinese diplomacy. Videos on the tablet will show musical automata from other museum collections, charting the increased sophistication of these spring-driven timepieces.

Automaton clocks were made in Europe, but often intended for Asian markets. The cartoon, pictured here, pokes fun at the 1793 meeting of the Chinese Qianlong Emperor and Lord Macartney’s Embassy, which was Britain’s first diplomatic effort with China. Macartney’s mission aimed to facilitate trade through de-regulation and the establishment of an English embassy in Canton (Guangzhou). This caricature shows gifts offered to the Emperor, including a clock next to a miniature painting of Britain’s King George III. Despite the gift, the Chinese denied all requests and ejected Macartney from the court two days later. (Click on photo below to enlarge). 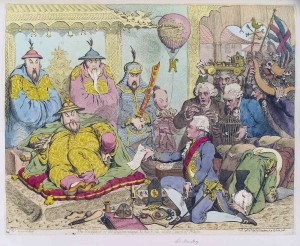 Inventor, jeweler, and toymaker James Cox opened a London museum in 1772 dedicated to his mechanical marvels, or “toys” as automata were called in Georgian England. Ticket holders could tour a showroom full  of movement, sound, gold and jewels. Though it is not known whether NOMA’s Automaton Clock came from Cox’s workshop, it is designated “in the manner of James Cox.” (Click on photo below to enlarge). 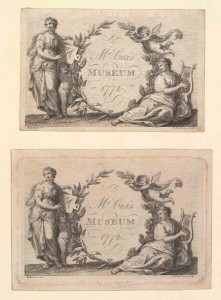 The first clocks in Medieval Europe were powered by hanging weights and mostly found in public clock towers and cathedrals. Smaller clocks, powered by a coiled spring, first appeared in  the 1400s. In addition to timekeeping, their spring-driven mechanics could power “automata” like dancing animals and other enchanting curiosities. Such clocks also represented a dramatic technological leap, one that led to the mechanical calculators of the Victorian era, and eventually to modern computing. (Click on photo below to enlarge).