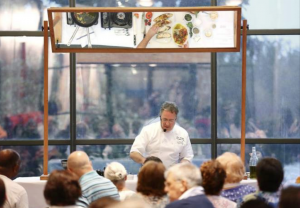 In conjunction with Bodies of Knowledge, the talented executive chefs and sous chefs of Café NOMA, Ralph’s on the Park, Red Fish Grill, Brennan’s, and Napoleon House will share their culinary vision inspired by the exhibition by honoring a special culinary mentor in their lives, a recipe that was passed to them from this instructor, and their interpretation of this dish.

The Ralph Brennan Restaurant Group is proud to operate Café NOMA, one of the “Best Museum Restaurants in America” according to Travel + Leisure and Food & Wine magazines. The 2019 Artful Palate series is held every Friday night at 6 pm from July 12 to August 23 in Café NOMA, with the exception of July 12, which will be staged in Stern Auditorium in celebration of the museum’s French Fête. The demonstrations are free of charge and open on a first come, first served basis. Admission to the museum is standard and additional Friday Nights at NOMA programs will be underway on each date. Come early for an evening of enlightening art appreciation — in the very best of taste!

For more information, visit Café NOMA’s website and stay up to date with posts on the restaurant’s Facebook page.