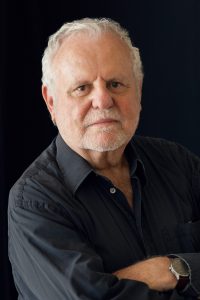 NEW ORLEANS – Bill Fagaly, renowned curator, scholar, and author at the New Orleans Museum of Art (NOMA) passed away on Monday, May 17, 2021. For 50 years, Bill worked at NOMA spearheading the establishment and development of the museum’s internationally acclaimed collection of African art. By far the longest serving member of NOMA’s staff, he leaves an extraordinary legacy.

In his five decades at NOMA, Fagaly organized over 90 exhibitions ranging from Fabergé to Sister Gertrude Morgan to Ancestors of Congo Square, a major exhibition and publication of the museum’s African collection. Bill was also a tireless advocate for contemporary art and artists, and was fully engaged with the artistic community in New Orleans and beyond. Author of more than 100 articles and essays, Fagaly recently released The Nightcrawler King: Memoirs of an Art Museum Curator in January 2021.

“William A. Fagaly died early Monday morning after a short illness. An internationally renowned curator of African art and an endlessly curious connoisseur, Bill served with distinction at NOMA for 50 years. After his retirement in 2016, Bill continued to serve on the Boards of several cultural institutions, including Studio in the Woods, Prospect New Orleans, and the Newcomb Art Museum. He also devoted himself to completing his memoir, which details his experiences, friendships, and love of art and artists. Bill will forever be a part of NOMA’s history and the African collection will remain as one of his enduring legacies. A generous friend and colleague, Bill’s presence, joyful and distinctive laugh and love for life will be terribly missed. Our thoughts are with his family, friends and all who knew him.”

ABOUT NOMA AND THE BESTHOFF SCULPTURE GARDEN
The New Orleans Museum of Art, founded in 1910 by Isaac Delgado, houses more than 40,000 works of art encompassing 5,000 years of history. Works from the permanent collection, along with continuously changing special exhibitions, are on view in the museum’s 46 galleries Wednesday through Sunday, 10 AM to 5 PM. The adjoining Sydney and Walda Besthoff Sculpture Garden features work by more than 90 sculptures, including works from several 20th and 21st-century master sculptors. NOMA’s Besthoff Sculpture Garden is open to the public Wednesday through Sunday, 10 AM to 6 PM. The New Orleans Museum of Art and the Besthoff Sculpture Garden are fully accessible to visitors with disabilities. Wheelchairs are available from the front desk. Museum admission is free on Wednesdays for Louisiana residents, courtesy of The Helis Foundation. Children 12 and under receive free admission. Teenagers (ages 13-19) receive free admission courtesy of The Helis Foundation.