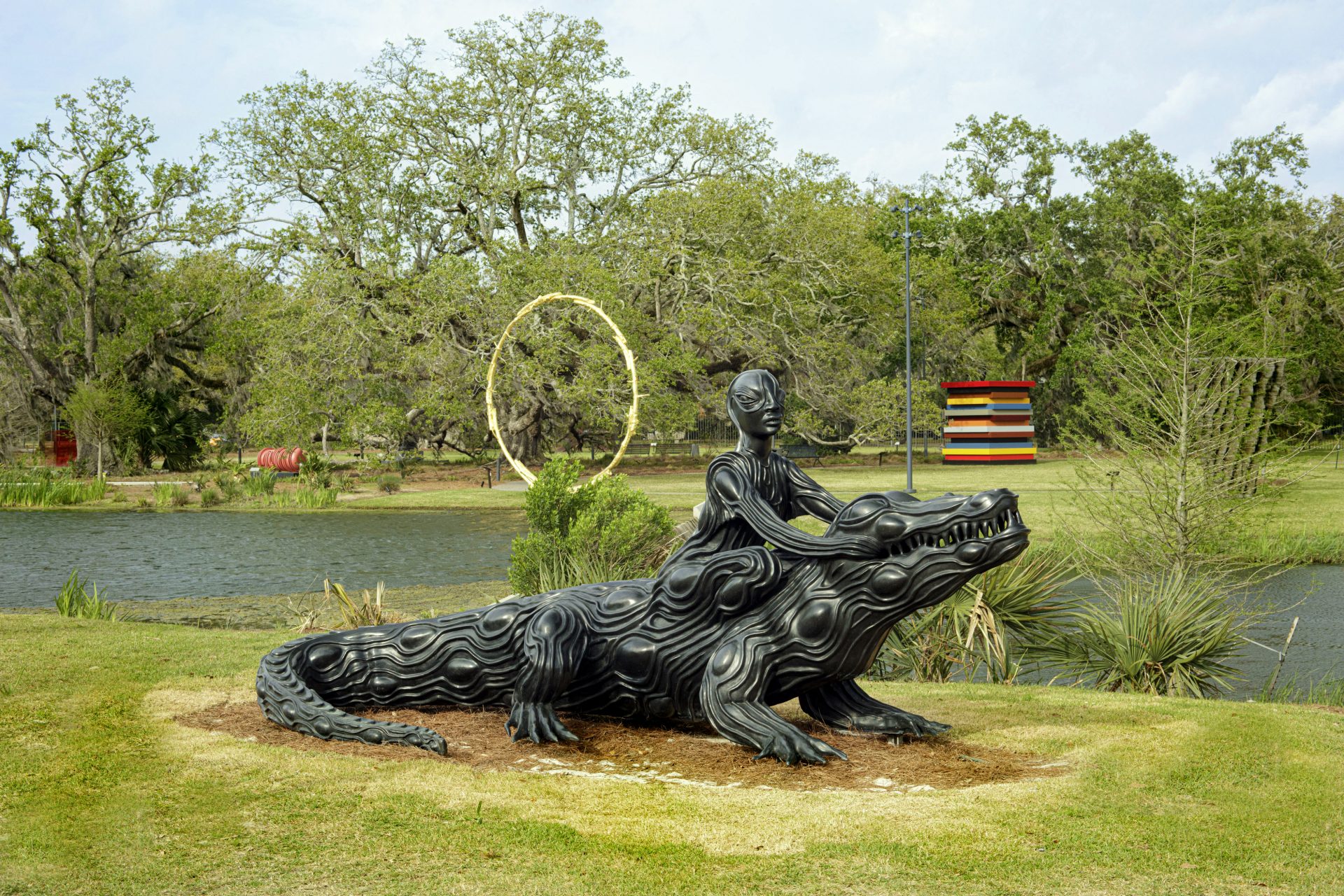 NEW ORLEANS – The New Orleans Museum of Art (NOMA) announces the acquisition of Crocodylus, a sculpture by Kenyan-American artist Wangechi Mutu. A gift of Sydney and Walda Besthoff, Crocodylus is the newest addition to the Sydney and Walda Besthoff Sculpture Garden, and the last acquisition by the garden patrons before the passing of Sydney Besthoff in February 2022. The sculpture was first on view from November 2021 to January 2022 in New Orleans’ Crescent Park as part of Prospect.5.

“With his beloved wife Walda, Sydney Besthoff was a passionate supporter of the arts, dedicated to connecting audiences in New Orleans with art and artists from around the world,” said Susan Taylor, Montine McDaniel Freeman Director of NOMA. “The installation of Crocodylus was Sydney’s last outing in February, and his vision is exemplified through this acquisition, the second sculpture by Wangechi Mutu that is now part of the sculpture garden’s holdings.”

With Crocodylus, Mutu drew connections between a prehistoric crocodile found in Northern Kenya and its relative, the alligator, native to the American South. The sculpture also recalls painful stories of enslaved Black people who were used as bait to capture alligators. Mutu sought to harness the animal’s strength and beauty as an otherworldly femme-reptilian hybrid, inspired by multitudes of crocodile deities, including the Egyptian god Sobek, who appears as a masculine figure with a crocodile head, as well as the goddess Ganga of the sacred Ganges River. The sculpture signals a new mythology, imagining Black feminine power and sovereignty through transformation.

“Prospect is honored that Crocodylus will be accessible to New Orleanians long term,” said Prospect Executive Director Nick Stillman. “Among our goals is to leave behind as many major Prospect commissions as possible, and we’re grateful that NOMA and the Besthoff family have helped keep Wangechi Mutu’s incredible Prospect.5 piece where it belongs, in New Orleans.”

Wangechi Mutu was born in Nairobi, Kenya, and currently lives and works between Brooklyn and Nairobi. She received her MFA from Yale University. In 2019, she inaugurated The Metropolitan Museum of Art’s Facade Commission, with an exhibition entitled The NewOnes, will free Us. Her work has been the subject of numerous solo shows, including, I Am Speaking, Are You Listening? at Legion of Honor, San Francisco, and Wangechi Mutu: A Fantastic Journey, which traveled to: Brooklyn Museum, New York; Nasher Museum of Art, Durham, North Carolina; Museum of Contemporary Art North Miami; and Block Museum, Evanston, Illinois. Other solo exhibitions include: Institute of Contemporary Art Boston; The Contemporary Austin, Texas; SITE, Santa Fe; Museum of Contemporary Art, Sydney; Musée d’Art Contemporain de Montréal; Deutsche Guggenheim, Berlin; Wiels Center for Contemporary Art, Brussels; Art Gallery of Ontario; Museum of Contemporary Art, San Diego; Kunsthalle Wien; and San Francisco Museum of Modern Art. Mutu is the recipient of Deutsche Bank’s “Artist of the Year” award, the Louis Comfort Tiffany Foundation Grant, the Joan Mitchell Foundation Painters & Sculptors Award, and the American Federation of Arts’ Leadership Award. Earlier this year, Mutu’s work MamaRay traveled to the Nasher Museum of Art at Duke University, where it was commissioned for their collection. Mutu was included in Prospect New Orleans’ fifth edition, Yesterday we said tomorrow, as well as its first iteration, which opened in 2008.

*The special exhibition Queen  Nefertari’s Egypt is on view at NOMA March 18–July 17, 2022. Throughout the run of the exhibition, NOMA is open Sunday–Friday, 10 am–6 pm; Saturday 10 am–5 pm, and is open until 9 pm on Tuesdays. For more information about admission to Queen Nefertari’s Egypt, visit www.noma.org/nefertari.