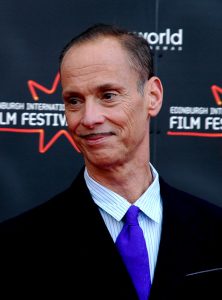 From Mondo Trasho to Cry-Baby and from Pink Flamingos to Serial Mom, John Waters has earned a notorious name in filmdom for his shocking he-can’t-do-that! scenes in underground films that have earned a cult following for nearly five decades. In conjunction with Pride of Place: The Making of Contemporary Art in New Orleans, NOMA is showing five of Waters’ films. The filmmaker is also a visual artist. Two of Waters’ photo collages and a sculpture of an oversized, toppled bottle of “poppers” are part of the exhibition (see below). Listed here are ten little-known facts about a man who never hesitates to reveal his deepest and darkest thoughts on the big screen.

1. Waters credits his traditional, upper middle-class, Catholic parents with an acceptance of his eccentricities that became evident at a young age. He was born on April 22, 1946, in Baltimore, Maryland, to Samuel and Patricia Ann Waters. “I often look back in wonder at how understanding my parents were,” he says. “Dr. Spock didn’t have a chapter in his child-rearing book on how to handle your son if all he wanted to do as a child is play ‘car crash.’ Yet my mom took me to junkyards as a toddler and let me wander around fantasizing ghoulishly.” Waters’ father, a manufacturer of fire-protection equipment, fronted the money to produce Pink Flamingos in 1973. The aspiring filmmaker paid the loan back in full, with interest, but admits, “They knew the type of movies I made were against everything I was brought up to be.”

2. Baltimore—or “Bawl-mer” in the native dialect of Waters’ characters—serves as the setting for all of Waters’ films. He owns a 1927 Italianate-style townhouse in the city’s Tuscany-Canterbury neighborhood that he purchased “because it looked like Dracula’s house.” At Christmastime he decorates the front door with a wreath of thorns and party guests have reported that the electric chair prop used in the movie Female Trouble, prominently displayed in an entry hall, is strung with festive lights. Waters loves the yuletide season and friends and fans send handmade ornaments to him. The collection includes a birdhouse modeled after the Unabomber’s boarded-up cabin, a bedazzled antler, and a bust of John Travolta as Edna Turnblad in the 2007 musical adaptation of Hairspray.

3. Waters’ began grooming a pencil-line mustache when he was a teenager. “When I was 19 I wanted to be Little Richard,” he said in an interview for Out magazine, “and so I grew it in homage to him really. I wanted to be the only white man in America who had one, and I still might be, really …  I don’t even realize I have a mustache anymore, I’ve done it for so long. I just shave it from the top every day, clip it about twice a week from the bottom, and if I miss I just draw it on!”

4. Named after his production company, Dreamland Productions, the “Dreamlanders” are a cast and crew of regulars used in Waters’ films. Many of the original Dreamlanders were Waters’ friends from Baltimore, and have continued to work with him as his films gained cult status. The only two Dreamlanders to have appeared in every Waters film—from 1969’s Mondo Trasho to 2004’s A Dirty Shame—are actresses Mink Stole and Mary Vivian Pearce, Waters’ childhood best friend. However, performers aren’t the only repeating aspects of his films: Waters has a fondness for characters with alliterative names, including Corny Collins, Donald and Donna Dasher, Francine Fishpaw, Link Larkin, Mole McHenry, Penny and Prudy Pingleton, Ramona Ricketts, Sandy Sandstone, Todd Tomorrow, Tracy Turnblad, Ursula Udders, Wade Walker, and Wanda Woodward.

5. Waters’ favorite movie is the 1939 classic The Wizard of Oz, a film that has inspired him since he saw it at a young age. He views the ending as tragic, with Dorothy returning to drab and dreary Kansas and leaving the world of colorful characters and fantastical magic in Oz. In a 2012 interview, Waters expressed that he’s “always wanted to do the sequel where Dorothy comes back and she, you know, keeps talking about Oz and they put her in a mental institution and give her shock treatments …” Waters famously cites the Wicked Witch of the West’s final line of dialogue as a kind of personal mantra, calling it an “inspiration to his life” when she screams, “who would have thought a good little girl like you could destroy my beautiful wickedness?” 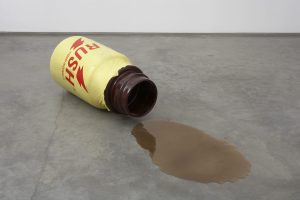 6. In 2012, John Waters hitchhiked from Baltimore to San Francisco, chronicling his adventures in a book titled Carsick. Picked up on the road by a myriad of characters, including a film-financing drug dealer, a demotion-derby driver, an eighty-one-year-old farmer, and an indie rock band, Waters carried a cardboard sign with the message “I’m Not Psycho.” His most unexpected driver was Maryland councilman Brett Bidle—a Republican tea-party supporter and Methodist—who gave Waters a ride all the way to Ohio in his Corvette. The opposites became friends on the journey, and Waters claimed that Bidle was “the first Republican [he’d] ever vote for.”

7. Waters claims Hairspray was “the only really devious movie I ever made.” He expressed astonishment that “The musical based on it is being performed in practically every high school in America—and nobody seems to notice it’s a show about two men singing a love song to each other that also encourages white teen girls to date black guys … Hairspray is a Trojan horse: it snuck into Middle America and never got caught.”

8. Cry-Baby is loosely based on a sensational, unsolved murder of Carolyn Wasilewski, a Baltimore “drapette,” as female hoodlums were nicknamed in the 1950s. Lurid headlines in the Baltimore Sun about the rising threat of juvenile delinquency captivated Waters, along with a teenage neighbor with a tough-guy reputation. “The inspiration was a guy who lived across the street from me when I was seven years old that had a hot rod, that was a drape, that I never talked to, that I was scared of, and that my parents hated,” Waters told Broadway.com. “He was Cry-Baby.”

9. Newspaper heiress Patty Hearst, who became notorious after an unlikely alliance with her kidnappers in a mid-1970s crime spree, has been cast by Waters in numerous films: Cry-Baby, Serial Mom, Pecker, A Dirty Shame, and Cecil B. DeMented. Having avoided the limelight after her arrest, trial, and prison sentence in 1976, Hearst opted to accept Waters’ offer in 1990 to appear in Cry-Baby after the two met at the Cannes Film Festival. “I knew he cast odd people,” she said “And I loved ‘Hairspray.’ So I read the script, and I thought it was really funny, and I thought it would be a lot of fun to do. It’s not like being asked to be in ‘Halloween.’ I wouldn’t even think about that. But to be in one of John’s movies, it was like, ‘Wow, OK.'”

10. In 2015 Waters delivered the commencement address at the prestigious Rhode Island School of Design. He called himself “the People’s Pervert” and shared his life lessons. He told the graduates, “Contemporary art’s job is to wreck what came before. Is there a better job description than that to aspire to?”