NOMA’s Learning and Engagement staff suggests the following books related to themes of stoytelling. In partnership with Octavia Books, links are provided to purchase these titles through this independent bookstore based in New Orleans, which offers nationwide shipping or curbside pickup. 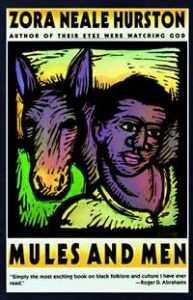 Mules and Men is a treasury of black America’s folklore as collected by a famous storyteller and anthropologist who grew up hearing the songs and sermons, sayings and tall tales that have formed an oral history of the South since the time of slavery. Returning to her hometown of Eatonville, Florida, to gather material, Zora Neale Hurston recalls “a hilarious night with a pinch of everything social mixed with the storytelling.” Set intimately within the social context of black life, the stories, “big old lies,” songs, Vodou customs, and superstitions recorded in these pages capture the imagination and bring back to life the humor and wisdom that is the unique heritage of African Americans.

Félix Ventura trades in an unusual commodity; he is a dealer in memories, clandestinely selling new pasts to people whose futures are secure and who lack only a good lineage to complete their lives. In this completely original murder mystery, where people are not who they seem and the briefest of connections leads to the forging of entirely new histories, a bookish albino, a beautiful woman, a mysterious foreigner, and a witty talking lizard come together to discover the truth of their lives. Set in Angola, Agualusa’s tale darts from tormented past to dream-filled present with a lightness that belies the savage history of a country in which many have something to forget — and to hide.

A brilliant American debut by one of the most lauded writers in the Portuguese-speaking world, this is a beautifully written and always surprising tale of race, truth, and the transformative power of creativity.

Humans live in landscapes of make-believe. We spin fantasies. We devour novels, films, and plays. Even sporting events and criminal trials unfold as narratives. Yet the world of story has long remained an undiscovered and unmapped country. Now Jonathan Gottschall offers the first unified theory of storytelling. He argues that stories help us navigate life’s complex social problems—just as flight simulators prepare pilots for difficult situations. Storytelling has evolved, like other behaviors, to ensure our survival. Drawing on the latest research in neuroscience, psychology, and evolutionary biology, Gottschall tells us what it means to be a storytelling animal and explains how stories can change the world for the better. We know we are master shapers of story. The Storytelling Animal finally reveals how stories shape us. 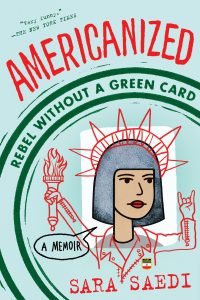 This hilarious, poignant and true story of one teen’s experience growing up in America as an undocumented immigrant from the Middle East is an increasingly necessary read in today’s divisive world. Perfect for fans of Mindy Kaling and Trevor Noah’s books.

Americanized follows Sara’s progress toward getting her green card, but that’s only a portion of her experiences as an Iranian-“American” teenager. From discovering that her parents secretly divorced to facilitate her mother’s green card application to learning how to tame her unibrow, Sara pivots gracefully from the terrifying prospect that she might be kicked out of the country at any time to the almost-as-terrifying possibility that she might be the only one of her friends without a date to the prom. This moving, often hilarious story is for anyone who has ever shared either fear.

It’s been three years since the Virgil County High School Massacre. Three years since my best friend, Sarah, was killed in a bathroom stall during the mass shooting. Everyone knows Sarah’s story — that she died proclaiming her faith.

But it’s not true.

I know because I was with her when she died. I didn’t say anything then, and people got hurt because of it. Now Sarah’s parents are publishing a book about her, so this might be my last chance to set the record straight… but I’m not the only survivor with a story to tell about what did — and didn’t — happen that day.

Except Sarah’s martyrdom is important to a lot of people, people who don’t take kindly to what I’m trying to do. And the more I learn, the less certain I am about what’s right. I don’t know what will be worse: the guilt of staying silent or the consequences of speaking up… 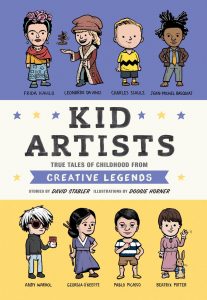 Can’t nobody stop you

Can’t nobody cop you…

In this follow-up to Newbery-winner The Crossover, soccer, family, love, and friendship take center stage. Twelve-year-old Nick learns the power of words as he wrestles with problems at home, stands up to a bully, and tries to impress the girl of his dreams. Helping him along are his best friend and sometimes teammate Coby, and The Mac, a rapping librarian who gives Nick inspiring books to read.

This electric and heartfelt novel-in-verse by poet Kwame Alexander bends and breaks as it captures all the thrills and setbacks, action and emotion of a World Cup match!

Every great artist started out as a kid. Forget the awards, the sold-out museum exhibitions, and the timeless masterpieces. When the world’s most celebrated artists were growing up, they had regular-kid problems just like you. Jackson Pollock’s family moved constantly—he lived in eight different cities before he was sixteen years old. Georgia O’Keeffe lived in the shadow of her “perfect” older brother Francis. And Jean-Michel Basquiat triumphed over poverty to become one of the world’s most influential artists. Kid Artists tells their stories and more with full-color cartoon illustrations on nearly every page. Other subjects include Claude Monet, Jacob Lawrence, Leonardo da Vinci, Vincent van Gogh, Pablo Picasso, Frida Kahlo, Beatrix Potter, Yoko Ono, Dr. Seuss, Emily Carr, Keith Haring, Charles Schulz, and Louise Nevelson. 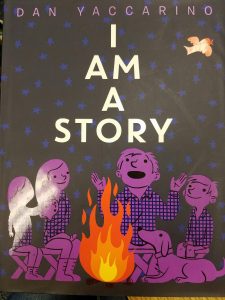 From cave drawings to the invention of the printing press to our digital age, discover how a story has been told in many different ways from the past to today. It’s always been around, making us happy, sad, excited, or scared and bringing people together.

With simple text and delightful illustrations, Dan Yaccarino reminds us of the power of story.

A young boy wants to write a story, just like his big sister. But there’s a problem, he tells her. Though he knows his letters, he doesn’t know many words. “Every story starts with a single word and every word starts with a single letter,” his sister explains patiently. “Why don’t you start there, with a letter?” So the boy tries. He writes a letter. An easy letter. The letter I. And from that one skinny letter, the story grows, and the little boy discovers that all of us, including him, have what we need to write our own perfect story.

A little girl sails her raft across a sea of words, arriving at the house of a small boy and calling him away on an adventure. Through forests of fairy tales and across mountains of make-believe, the two travel together on a fantastical journey that unlocks the boy’s imagination. Now a lifetime of magic and adventure lies ahead of him . . . but who will be next? Combining elegant images by Oliver Jeffers and Sam Winston’s typographical landscapes shaped from excerpts of children’s classics and lullabies, A Child of Books is a stunning prose poem on the rewards of reading and sharing stories—an immersive and unforgettable reading experience that readers will want to pass on to others.

Jamie Lee Curtis and Laura Cornell perfectly capture a little girl’s simple, joyous celebration of herself, as she looks back on her childhood from the lofty height of four and a half years. This spirited view of growing up is perfect to share at home or in a classroom, as kids will respond to the exuberant pleasures of growing freedom and independence. “When I was little, I could hardly do anything. But now I can do lots of things, like braid my own hair and go to nursery school. I’m not a baby anymore. I’m me!”