On February 18, in conjunction with the opening of the new exhibition A Life of Seduction: Venice in the 1700s, NOMA played host to another display of Italian style and decadence from more recent decades. In partnership with Ferrari of Houston and the Ferrari Club of America, Lelong Drive was the site of New Orleans’ first Concorso d’Eleganza, a gathering of the prized sports cars across the span of forty-plus years and their proud owners. As timing would have it, the car show fell on the exact date of inventor Enzo Ferrari’s 119th birthday. 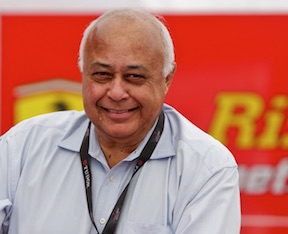 Presiding over much of the day’s festivities was Giuseppe Risi, owner of Ferrari of Houston for thirty years. He is also the founder and team principal of Risi Competizione, the most successful Ferrari GT Racing Team in American history — a record that includes three wins at the 24 Hours of Le Mans, four wins at the 12 Hours of Sebring, and three wins at the Petit Le Mans. Risi has forty years of experience in international competition, racing everything from F1 cars to sports prototypes and GTs. He claims the maximum speed he reached behind the wheel was 215 miles per hour. Arts Quarterly editor David Johnson caught up with  the spokesman to discuss an illustrious career association with an automotive brand known the world over.

What has made Ferrari such an enduring brand a legendary name in automotive history?

Well, first and foremost, the Ferrari was born not as a road car but as a racing car. And then it was domesticated. Enzo Ferrari only made road cars to support his racing team, because prior to making cars he was a team manager for Alfa Romeo. He was always interested in racing, that was his whole background. He wasn’t like others who make cars and then decide to adapt them to go racing. It was the other way around for him. Even to this day, the concept of the Ferrari is still that fundamental in that the car is created as a very high performance vehicle and then all the creature comforts are added.

How did you begin your association with the company?

In 1972 I met Mr. Ferrari. I was going to work for him as some sort of little coordinator, I was very young, but it didn’t quite work out. But I had really been involved in racing. I was racing in Europe before I came to the United States. I always stayed in touch with Mr. Ferrari, but at the time I never thought I could own a Ferrari, much less run a dealership. That was something that felt extremely far away. But I followed my heart, I followed my love for the product. Even people who don’t know what a Ferrari is, when you come close to a Ferrari, it’s a very stirring experience, when you fire the engines up and everything else.

Today the cars are a little more quiet because of noise levels in cities and the decibel level is lower. But going back, forty-five, fifty years ago, when you heard a Ferrari, you knew it was a Ferrari. There was no doubt. That’s part of what this whole Ferrari magic is, and plus the design. Enzo Ferrari would say is you try to create the safest and most mechanically reliable vehicle possible, and then he would send it to the “clothier.” He would say the car is like a beautiful lady and you’ve got to find the right seamstress or tailor to dress it, and that’s where he went to Pinin Farina and others to complete the designs.

What was your impression of Enzo Ferrari?

Enzo Ferrari was a very, when I say simple, I mean there have been all these books written about him and the fame, but he was a very normal type of individual. You could certainly see the drive in him. Obviously when I met him in 1972, he was well on his way, he was born in 1898, but he was still very active. Extremely active. He still chose the engines back then, there wasn’t the amount of computers back then to help make choices. He would ask for the dynamometer results from engines that were being tested. He would say, OK, I want this engine put in this car for this track. That’s all he lived for. Christmas Day, New Years, he’d always be in Maranello, at the factory. He lived eighteen kilometers away in Moderna. He put his heart and soul into everything he did. 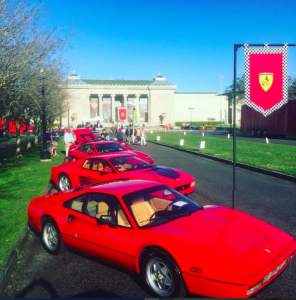 Ferraris of many makes and models lined Lelong Drive in front of NOMA on Feb. 18, 2017.

How would you describe the feeling of racing a car for someone who has never been behind the wheel of a car reaching such high speeds?

There is the thrill of speed, but one has to be a little careful. But if you get focused on speed but you don’t have the skill factor that goes with it, then you can get in some serious trouble. You always need someone to guide you. The quest for speed has always been with us — people who ride horses, people who run, there’s an adrenaline rush. For example, Carl Lewis, the Olympic athlete, lived in Houston and he was one of our customers and a friend. There was a time in his 100-yard sprint when he was running at 32 miles an hour. I used to tease him. I would say, man, you can’t be running around in a school zone or you’ll get a ticket!

The future of the Ferrari Company is still what it is — making exclusive cars. Ferrari is a company that doesn’t sleep. These incredible cars that are out there now, being sold at auctions for millions and millions of dollars, those dollars are not going back to Ferrari. Ferrari still has a living to make by making future road cars. Those cars have the absolute most of everything that can be put into a legal road car. And one of the primary things about Ferrari is the safety factor. These cars are fast but they are very strong mechanically. That is what Enzo Ferrari always wanted.

FAST FACTS ABOUT THE HISTORY OF FERRARI

• Enzo Ferrari was born on February 18, 1898, in Moderna, Italy. At age 10, his father took him to a motor race in Bologna and young Enzo became completely entranced by the action.

• Enzo became a race car driver in 1919. In 1923 Enzo met the Count and Countess Baracca, parents of the famous Italian World War I hero pilot Francesco Baracca who died in battle. Countess Baracca invites Enzo to use her son’s prancing horse emblem from a fighter plane, the Cavallino Rampante, as a mascot on Enzo’s cars, later to be adapted as the Ferrari company logo.

• By 1937, after working for Alfa Romeo, Enzo founded Auto-Avio Costruzioni in Moderna, a company supplying parts to racing teams. With the outbreak of World War II, Ferrari’s factory was forced to undertake war production for Mussolini’s fascist government. The assembly plant was bombed by the Allies and Enzo relocated his company to the nearby town of Maranello where the Ferrari brand was born in 1947.

• In order to finance his competitive racing team, the Scuderia Ferrari, Enzo began to reluctantly sell road cars. The first Ferrari road car was the 1947 125 S, powered by a 1.5 L V12 engine.

• During the 1950s, Ferrari had legendary engineers like Aurelio Lampredi and Vittorio Jano on the payroll, and bodies designed by the legendary Pinin Farina. The eponymous firm of Pininfarina is employed by a wide variety of automobile manufactures to design vehicles. These firms have included long-established customers such as Ferrari, Alfa Romeo, Peugeot, FIAT, GM, Lancia, and Maserati, to emerging companies in the Asian market with Chinese manufactures like AviChina, Chery, Changfeng, Brilliance, and JAC and Korean manufacturers Daewoo and Hyundai.

• On August 14, 2014, a 1962 Ferrari 250 GTO sold for an all-time record price at an auto auction: $38,115,000. The car had been in single family ownership for 49 years by Fabrizio Violate, scion of a wealthy family with considerable business interests in agriculture and mineral water bottling and distribution under the brand name Ferrarelle.