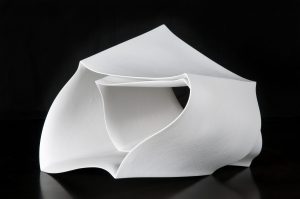 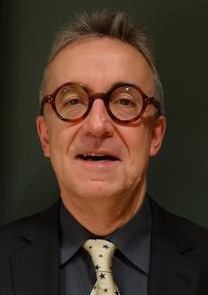 Joe Earle is considered one of the preeminent experts on contemporary Japanese art. As guest curator of NOMA’s current exhibition, New Forms, New Voices: Contemporary Japanese Pottery from the Gitter-Yelen Collection, he will speak about “Japanese Ceramics Tomorrow” on Friday, November 17, at 6:30 pm in the Stern Auditorium. In advance of his talk, he spoke with David Johnson, editor of NOMA’s magazine, about the multi-millenial history of pottery in Japan and how creative forces in the wake of World War II broadened this robust tradition.

Japan boasts one of the most robust contemporary pottery scenes in the world. Why is this art form so enduring and what makes Japan unique in its support of so many professional potters?

Several different factors have contributed to Japan’s preeminence in contemporary pottery. For one, they got an early start. Japan’s ceramic culture is among the oldest in the world, dating back some 15,000 years— ceramics are just deeply embedded in Japanese culture.

Japan also experienced waves of outside influence and inspiration from Asia, Europe, and the U.S. Around the fifth century A.D., the technology to make stoneware was developed—firing pots at temperatures high enough to melt the silicon-aluminum compound in the clay and form a watertight body. In the medieval period, imports of elite Chinese ceramics stimulated glazed-stoneware copies, and at the end of the sixteenth century, an influx of Korean potters brought new skills to Japan. In the seventeenth century, European royalty and the bourgeoisie created a demand for Japanese porcelain. In the latter nineteenth century, a global craze for all things Japanese spurred the creation of self-consciously “Japanese-looking” export wares. A little later, the invention of the concept of “studio pottery,” and the famed collaboration between the British ceramicist Bernard Leach and Shoji Hamada et al. brought more attention to Japanese pottery. In our own time, the Americans have continued this love affair with contemporary Japanese ceramics, which is why we’re having this interview!

Resources and economic stimuli also played a role. Japan is a deeply forested and historically thinly populated archipelago with almost unlimited supplies of firewood. The land provides sources of fine-quality clay. In the early seventeenth century, porcelain-stone deposits were discovered in Kyushu. On the demand side, there’s the development of great urban centers with sophisticated food cultures in the seventeenth and eighteenth centuries , as well as rapidly improving communications later in the Edo period, from 1615 to 1868. The Taisho era, from 1912 to 1926, brought a rise of a departmental-store-based consumer culture, and postwar, there were four decades of headlong economic growth.

In the sixteenth century, the rise of the tea ceremony, the formation of a unique native aesthetic, and the emergence of a generation of charismatic cultural leaders, gave rise to a host of new ceramic styles. In the 1930s saw the rediscovery and re-creation of classic tea-ceremony wares from around 1600. In that same decade, the Mingei or “People’s Crafts” movement was developed by nationalist ideologue Yanagi Muneyoshi. After the war, Mingei, with its connotations of rustic simplicity and unpretentiousness, was the ideal wrapper for a fresh presentation of Japanese crafts in general, and ceramics in particular, especially in the United States.

None of these on their own account for robust good health of Japanese ceramics today, but taken together they provide part of the answer.

What is it about the Gitter-Yelen Collection that makes it exceptional?

All private collections should be unique and exceptional in that they closely reflect a personal taste and way of looking at things. In the case of the Gitter-Yelen collection, I was surprised to discover that although Kurt and Alice have been collecting Japanese art—painting, mostly—for many decades, the great bulk of their acquisitions of ceramics date from after about 2000, so what we have here is a snapshot of the current generation, as well as a few glimpses of what is to come next. The collection is gloriously idiosyncratic, with some favorite artists—and friends—represented by many pieces, but others just by a single work. 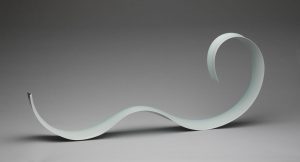 What characteristics distinguish contemporary Japanese pottery from that of other cultures?

Japanese ceramics today are so diverse, and globally there’s so much cultural interaction today, that your question is becoming harder and harder to answer. A few distinguishing features would include a rootedness in technique and in clay, unmatched technical refinement, and an absolute “rightness” of the relationship between form and decoration . . . but remember that several of the artists in the show have had long exposure to foreign ceramic practice, have taught outside Japan, or trained overseas—especially the women. Fifty years from now, I wonder how easy it will be to speak of “Japanese ceramics.”

In the immediate postwar years, was it difficult for Japanese ceramicists to break free of age-old traditions and chart new artistic directions?

We mostly need to look to Kyoto, long a center for quality “studio” ceramics, for the answer to your question. I won’t say that it was easy but it was certainly natural for angry, disatisfied returnees from the battlefields to rebel against the stifling control of the semi-hereditary workshops and the assumption that clay objects should be made in utilitarian shapes, using a potter’s wheel. As early as 1950, Kazuo Yagi and his Sodeisha group decided to stop working from older ceramic models and to discontinue the custom of submitting works to the official annual exhibitions. Certainly that decision made life hard for them for a while. What’s interesting, by the way, is that although they had a bit of exposure overseas very early on, the artists of the Sodeisha movement weren’t at all well known outside Japan really until the 1980s. Mingei, an essentially conservative movement fronted by the big pots and big personality of Shoji Hamada, dominated the international image of Japanese ceramics because, just like medieval stonewares, it perfectly matched postwar expectations of Japan. Sodeisha had to fight not just against the conservatism of the Japanese craft world but also against foreign, especially American, ideas of what Japanese pots should look like.

How did your interest in Japanese art develop?

I started out by majoring in Chinese at college in the U.K., mostly just out of curiosity, and along the way my interest in Japan was first piqued by fellow students who were studying Japanese, by wanting to understand the cursive marks, particular to written Japanese, that appeared between the Chinese characters which are common to both written Chinese and written Japanese. So I took basic boot-camp Japanese while still at college. The second thing that happened was that I got the opportunity to work at a newly formed national museum department devoted to Asia during a brief moment of increased government spending on the arts. I joined the Victoria and Albert Museum, thinking that I would be a curator of Chinese art but soon discovered this vast, beguiling treasure house of Japanese art, mostly crafts of the Edo period (1615–1868) and a huge collection of prints. Knowledge about Japanese art was focused on one individual, Basil Robinson (“Robbie”), a formidable autodidact who was very generous with his broad knowledge, both hands-on practical and in terms of signatures, seals, lineages, and inscriptions.

One of the principal tasks at that time was to survey all the holdings of Japanese art that had accumulated at the V&A since 1851, the year of the Great Exhibition, and manually document it on 3-by-5-inch index cards, so I learned a lot quickly, including how to type the word “chrysanthemum” frequently and at speed!

Another opportunity was given me by the V&A’s visionary Director Sir Roy Strong who asked me, aged only 27 and having only once visited Japan, to curate an ambitious exhibition about contemporary Japanese design and living, Japan Style, in 1980. In 1981, I was asked to join the curatorial committee for the Great Japan Exhibition at the Royal Academy, a vast loan show of Edo-period art on a scale that just wouldn’t happen today. So I was very lucky. Thanks to favorable demographics I became head of the “Far Eastern” Department in 1983 and around the same time it happened that we were given the opportunity to host the groundbreaking exhibition Japanese Ceramics Today, featuring works from the Kikuchi Collection, that came to us via the Smithsonian Institution. Not long after we were successful in securing financial support from the Toshiba Corporation to create the V&A’s first major gallery of Japanese art and it’s still there today, having just had a major renovation . . . then came frequent travel to Japan, further exhibitions including Visions of Japan, a huge experiential, architectural festival-within-a-festival at the V&A in 1991, and a decade or more of freelance cataloguing and curating for many diverse clients.