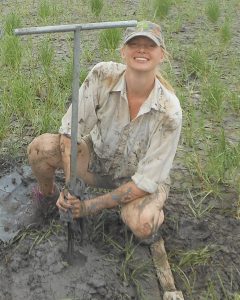 In conjunction with the exhibition East of the Mississippi: Nineteenth-Century American Landscape Photography, enviromental scientist Elizabeth Chamberlain of Tulane University will speak at NOMA on Friday, November 10, at 7 pm about her research tracing the history of human settlement in south Louisiana’s deltaic terrain. She spoke with Arts Quarterly editor David Johnson in advance of her lecture.

In your research, you study how people have adapted to life in deltaic regions, areas that are both abundant in natural resources and prone to natural disasters. Can you provide an example of how human settlements in our Mississippi Delta region have adapted to what can often be an inhospitable land?

It is true that deltas are very challenging yet rewarding places to live. People in the Mississippi Delta have adapted to living here for thousands of years. One timeless strategy is living on higher elevation land, such as on the banks or “natural levees” of contemporary and past river channels. Historic strategies include elaborate engineering programs, such as draining and developing swamp lands, and constructing extensive levees to impound the river and coast. Contemporary coastal engineering also employs nature-based approaches, such as fortification of the coast and habitat creation using oyster shells, and possibly diverting sediment-rich river water to build new land. I think people live here now in part because New Orleans has a lot to offer, and also because people feel a strong tie to the land and to their heritage.

Do you use 19th-century photography in your research? If so, what clues can these images provide?

Yes, I—and other scientists—do use historic photographs to understand how land has changed over decadal or even centennial timescales. This is useful for coastal scientists. For example, we can look at retreating shorelines or changes in the area of wetlands. Historic photographs also provide clues to the layers of human use and structures at archaeological sites. For example, I’m currently contributing to work at the Natchez Fort site near Sicily Island, Louisiana, led by Tulane archaeologist Dave Watt. The Natchez Fort landscape has been used by people for millennia; first by indigenous mound-building people, then by Natchez people in the early 1700s, then as a Civil War battleground, as a historic farm and pecan grove, and presently as a corn field. For this project, we used a historical photograph to identify past agricultural crops and historic structures, like farm houses, that are no longer at the site. This helped us understand the soil profile and zoning of historic artifacts.

You have studied deltaic cultures in both Bangladesh and Louisiana. How do these regions compare?

Louisiana and Bangladesh have a lot in common. Deltas and especially port cities such as New Orleans and Dhaka, are among the great economic engines of the world. They are industrial, bioproductive and also face similar environmental threats such as river flooding and tropical storms. Bangladesh and Louisiana also have similar climates because they are near oceans and at similar positions relative to the equator—Bangladesh is 90°W, 25°N and Louisiana is 90°E, 30°N. This means that the coastal portions of these two countries cultivate many of the same crops, like rice. Food is good and spicy in both places! A big difference is population density—Bangladesh is among the most densely populated countries in the world.

Given the threat of climate change and sea-level rise, life in our region may be forced to undergo drastic changes. Are you seeing these effects now?

A large component of my research is “field work,” that is, going out and taking samples and observing land change. I have definitely seen changes in the south Louisiana landscape, such as the submergence of Old Highway 1 near Leeville and construction of the new elevated road to Port Fourchon. Perhaps more weighty, many longtime local residents I meet talk in coastal Louisiana to me about how the land was different when they were kids. I think it is amazing that coastal change is well within the living memory of the population of south Louisiana.

I understand your research has involved the science of luminescence dating. Please describe that.

Luminescence dating is a tool that measures the time of deposition of sediment—sand and silt grains—based on a signal that is stored in quartz or feldspar crystals when they are removed from light. It is similar to radiocarbon dating in that the natural signal changes in a predictable or measureable rate. It is different from radiocarbon dating in that the signal accumulates with time rather than decreases, and that it can be used to date events that happened hundreds of thousands of years ago. Most importantly, luminescence dating measures sediments: the key natural building material in many deltas. This allows us to directly measure landscape change over millennial timescales, well beyond historic records and contemporary monitoring programs.

Luminescence dating techniques were first introduced in the late 20th century and evolved for use on river deposits in the early 21st century. This means that directly dating deltas has only been possible for about the last fifteen years. It is thrilling to work with such a young science, both because of the many new opportunities for learning about landscape dynamics via luminescence dating, and the potential to contribute to the development of luminescence methods.