The NOLA Project is back in residence at NOMA with Tell It To Me Sweet, their first in person production since winter 2020. The company commissioned Brittany N. Williams to write a “trail of tales” inspired by folk and fairy tales and set outdoors in the Sydney and Walda Besthoff Sculpture Garden. Beginning in January, Brittany will take on a new position within the company, becoming a Co-Artistic Director with company founder and longtime Artistic Director A.J. Allegra. NOMA Curator of Education Tracy Kennan chatted with Brittany and A.J. about the merits of performing in public spaces and the importance of telling stories.

PURCHASE TICKETS TO TELL IT TO ME SWEET

Brittany, you have performed across three continents and write in many genres. What made you want to be an actor and writer?

Brittany: I decided I wanted to be an actor when I was 10 years old and I did my first school play. It was called The Waymakers and it was about a group of 5 kids who travel through time meeting different Black history-makers from Baltimore, because that is where I’m from. I was child number three, with no name, and I had one line, “I can’t believe we’re doing this!” that I said throughout the play and then at the end I said “I CAN believe we’re doing this!” After that I was hooked! My drama teacher wrote that play and I almost didn’t even take that class.

In middle school I had another drama teacher who was adamant that we see as much theater as possible! We would drive 3.5 hours from Baltimore to New York to see Broadway productions. This really set me on a path that embraced theater. I went on to major in musical theater at Howard University and then to earn a Masters in classical acting at the Royal Central School of Speech and Drama in London.

I always made up stories and wrote for class projects, but I didn’t think about writing theater content until high school. I was part of the youth theater program under Mr. Troy Burton at the Arena Playhouse, the oldest continuously running African American theater company in the country. Mr. Burton asked us to contribute pieces to an annual Black History production, which was my first experience writing for the stage. Also, through that program I was able to be a part of a cast that travelled to Rotterdam in the Netherlands for a theater festival, which was also a play that the young cast wrote. Now I also write fiction, short stories, and I am currently working on a novel.

What kinds of stories did you like as a child?

Brittany: Of course I liked fairy tales, and I liked mythology. I was the kid who whenever a Disney movie came out I would go and look for the source material and read that. It was a great time until the Hunchback of Notre Dame came out and that was a little awkward to be reading as a kid. The movie and the book are a little dark!

When I was growing up there was a one hour block on Saturday mornings on HBO where from 7:00 – 7:30 am they would show Shakespeare the Animated Tales, which was a BBC production, then from 7:30 – 8:00 they would show Happily Ever After, Fairy Tales for Every Child where they took fairy tales and voiced them with different actors and placed them in different cultures. I feel like that one hour block really influenced me. 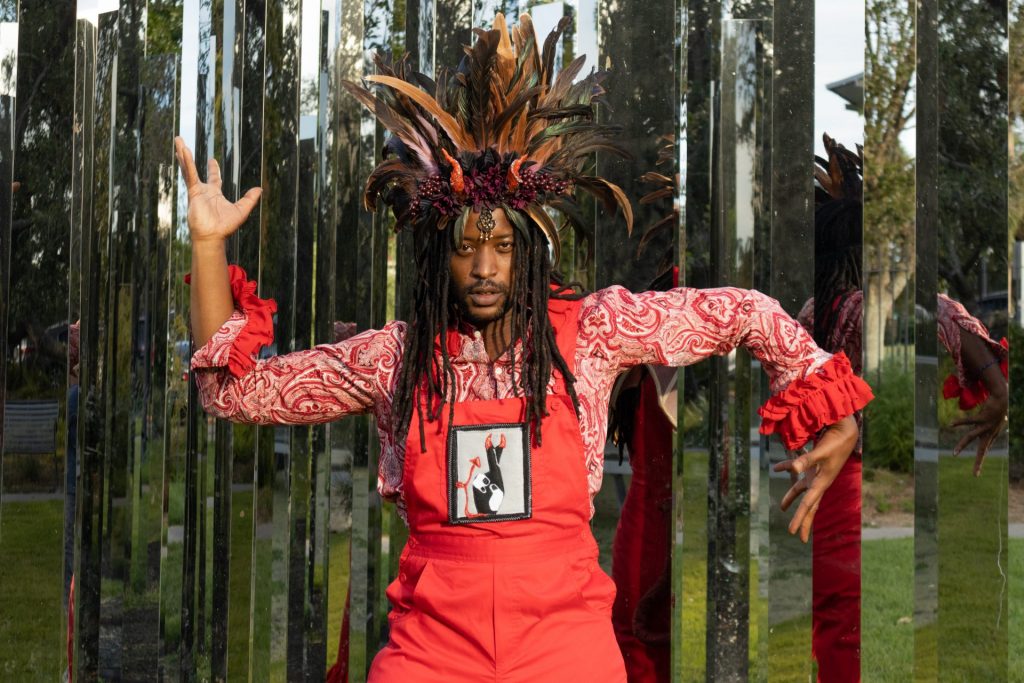 Promotional Photo for “Tell It To Me Sweet”

What makes you want to be a storyteller?

Brittany: Stories are an essential state of human communication. Before there was written language, people were telling stories. I recently read an article about drawings in an ancient cave with double line drawings. When scientists went through a cave with a lantern, and the lantern would swing, they realized that the pictures moved! It was like an ancient movie! We’ve been sharing stories since language was invented. I also believe that bringing people together to listen and to tell stories is an essential part of community building. The things I saw and heard as a kid inspired me into adulthood, and I hope to be able to do that now!

A.J, The NOLA Project has presented plays at NOMA for about 10 years now. Why is an art museum a place to tell stories?

A.J.:Well, necessity is the mother of invention! At first we were a theater company in search of a theater, but I think that having theater in communal spaces like NOMA and City Park helps people connect to the work and removes some obstacles. It puts theater in a place where people can come upon it accidentally. Maybe they are just in the park and they see a rehearsal or see us setting up for a production. They can witness the process.

I’ve learned in 10 years of producing in the Besthoff Sculpture Garden that it is better to let the audience use their imagination and to trust that the space will do the work. As directors and stage managers, we can keep it simple, and only bring in essentials because the space is so inventive.

How did you come up with the idea to include a variety of stories and a moving audience? What were some of the challenges?

A.J.: We wanted to create a show that would be as COVID safe as possible, and would keep people from congregating in one large group. In the 2014 production Adventures in Wonderland we created three groups who experienced the play in different ways, so I wondered if we could make even smaller groups. I approached Brittany with the idea of the audience moving to see short plays and fairy tales lends itself to this format.

Brittany: I wanted to make sure that the performance isn’t too stressful for actors to reset between shows. I drew from my experience as a performer at Hong Kong Disneyland with regards to the stamina and energy that would be needed to perform each play 5 times.

How did you determine what kinds of stories are featured?

Brittany: Well, I wanted to spotlight stories that aren’t as mainstream and I wanted to do a mix of Grimm’s Fairy Tales and traditional African American folktales. There is overlap here because that is the nature of these stories, they travel and morph. As they come to another culture they take on new things and shift in different directions. Some of the tales will be familiar. The Spinner has elements of Rumplestilskin. There is a Big Bad Wolf story, The Wolf and the Seven Kids. The Oak Tree is a variation on the Juniper Tree morphed with The Singing Bones and is probably the darkest tale. The Little Devil and the Soul is pulled from African Folk Tales and has roots in enslaved people outwitting slavers.  The Buried Treasure has the theme of Everyman as hero. I really wanted to have a blend of fun, funny, and a little bit scary.