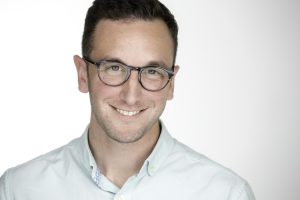 Two productions of the hit family-friendly play Oskar and the Countless Costume Changes by The NOLA Project remain to be staged in the Stern Auditorium of the New Orleans Museum of Art. The play confronts gender stereotypes in a humorous manner that appeals to both children and adults. When Oskar is given permission to stage a school play, he casts two classmates who fail to be typecast in traditional male or female roles. The boy wants to play the princess. The girl wants to play the heroic knight. Following a Saturday performance, Arts Quarterly editor David Johnson sat down with A.J. Allegra, artistic director of The NOLA Project, to discuss the play’s timely theme.

How did you become familiar with Oskar and the Countless Costume Changes?

Alex Ates, our Education and Engagement Director, was at a theater educators conference last year, and he saw a reading of the play. The play was developed out at TheatreWorks in the Silicon Valley by the two authors, Prince Gomolvilas and Matt Ackels. Alex came back really excited because he said, “I’ve found this play that deals with gender identity,” which is a very modern and hot issue right now, Especially in our American politics.

He said, “It’s a play that teaches kids about gender diversity in a really subtle and fun way. It’s not didactic and it doesn’t hit you over the head with a message. It’s not overly political. It just presents the idea that there aren’t boy things and there aren’t girl things. There’s just things. Boys and girls should feel free to do whatever they want, be it TaeKwonDo or dance class.”

I said, “That sounds like a great concept,” and so I read the script. I thought it was very funny and very irreverent. It reminded me a lot of the Bozo Show when I grew up, which was a delightful show for children every morning that had  jokes that were more enjoyable for the parents.

We designed it so that we would play it here at NOMA, in the auditorium, not a traditional theater stage. We wanted to start it at the museum and then bring it around to schools. This space works well since the play uses sound effects, but it doesn’t use any light cues whatsoever. This is a test run because we plan to take it around to other unique places, like school gyms, where we know we’ll only have florescent lighting.

Oskar is a three-character play. We have a small three-person crew as well. The play is very compact, it’s fun, and it’s only about 50 minutes. I think it’s highly enjoyable, as evidenced today by the children screaming.

Did you have any concern that perhaps audiences might not embrace a play with this subject?

I think the purpose of education, and specifically theater education, is to open people’s minds, not confirm stereotypes or rigidly held beliefs, so not really. I think that education is always going to be slightly progressive, and it should be. Again, I don’t think that the play propagandizes or uses didactic language in any sort of “Boys should dress up like girls” or “Girls should dress up like boys” message. It presents a reality in which that thing happens, and no one is punished for it. I think that’s the best way to teach that idea. Let’s just be open. Why do we have to judge and laugh at that, when it can just be something that’s fun? To each his own. 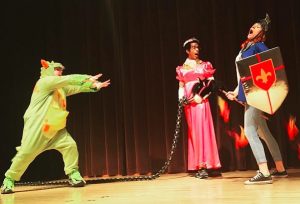 The actors you chose for Oskar, what traits were you looking for in particular that would match best this play?

To do children’s theater, you always need actors that are incredibly expressive and high energy. We picked two of our company members, James Bartelle and Kali Russell. Then they were joined by the actor who played Oskar, Brendan Bowen. We were familiar with all of their work. What’s nice is that all three of them have worked as theater educators. Anyone that has every worked with small children knows how you have to bring a lot of energy and razzle-dazzle to your role as a teacher. They just basically transfer that to their work on stage as actors. It suits them well to be children’s theater performers.

Saturday matinee performances of Oskar and the Countless Costume Changes will take place on March 18 and 25 at 1 p.m. Doors open at 12:30 p.m.

The play is intended for audiences ages 5 and up.

Admission: $10 Adults | $5 Children | Advance admission can be purchased at nolaproject.com or at the door.