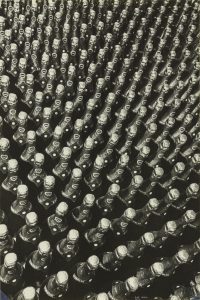 While her street photography earned Ilse Bing the title “Queen of the Leica,” she spent much of her career making fashion and advertising photographs like the one above. In 1933, as the company approached its 100-year anniversary, Pommery Champagne hired Bing to produce a series of photos documenting its production facilities in Reims, France.

Refuting any preconceptions about commercial photography as mundane, Bing’s work exhibits her outstanding use of perspective and pattern to create a photograph that (pardon the pun) really sparkles. Even though she was ostensibly hired to sell more champagne Bing approached the job with the same creativity and avant-garde approach found in her personal work. Now separated from a commercial context and in NOMA’s art collection, this photo gives us a chance to consider how we might engage differently with the same photograph if we view it in the pages of a magazine versus in a frame on a gallery wall.  As 2021 approaches, Bing’s photo of champagne bottles also puts us in the mind of measured reflection upon the end of a difficult year, and, finally, a bit of celebration to greet the months to come.