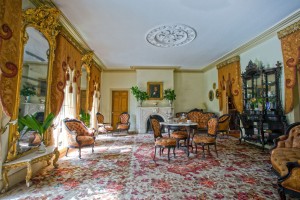 NEW ORLEANS, LA – The New Orleans Museum of Art (NOMA) announces the permanent installation of The Greenwood Parlor, now on view. In 2014, NOMA acquired the parlor furnishings from Greenwood Plantation, today called Butler-Greenwood, in St. Francisville, Louisiana. The 1850s/60s parlor suite assembled by Harriet Flower Mathews (1794-1873) survives with original textiles and rich documentation. After careful conservation, the parlor is one of the South’s best preserved examples of a pre-Civil War interior. In this installation, NOMA takes thoughtful steps to present the parlor’s story and recognize all the lives lived at Greenwood Plantation—Harriet Mathews, her family, and, equally, the enslaved men, women, and children whose labor created their wealth.

“NOMA is dedicated to preserving and sharing one of the region’s most important antebellum rooms with the public,” said Susan Taylor, Montine McDaniel Freeman Director of NOMA. “And with this room comes a complicated story, one that we firmly believe in presenting to our visitors as a means of encouraging dialogue and understanding of the challenging dynamics of our collective past.”

The Mathews family’s upholstered parlor furniture, silk draperies, and wall-to-wall carpet remained intact within the same room for more than 150 years before being acquired by NOMA. Family records in the archives at Louisiana State University detail the cost, purchase date, and retailer for nearly every item assembled by Mathews for this parlor. These same records also provide details of operating the family’s four Louisiana plantations, which relied on slave labor to harvest sugarcane and cotton. To remember this history of enslavement, upon entry into the gallery are the nails used in 1852 to install the wall-to-wall carpeting in the parlor, likely forged by an enslaved blacksmith. The modest nails and the nameless labor they represent contrasts sharply with the elegant parlor. Mel Buchanan, RosaMary Curator of Decorative Arts and Design at NOMA, created this juxtaposition as a reminder of the system of human bondage that sustained the American economy in the nineteenth-century.

“To live in the American South is to live daily with physical and social reminders of a complicated and often painful history,” said Buchanan. “NOMA believes part of the responsibility of the today’s museum is to directly address, rather than avoid, difficult historical material. This is a first step toward correcting omissions of the past, and in creating a more equitable telling of our histories for future generations.”

This installation has been generously supported by Stephen W. Clayton in memory of William Perry “Pepper” Brown IV.

The New Orleans Museum of Art, founded in 1910 by Isaac Delgado, houses more than 40,000 works of art encompassing 5,000 years of history. Works from the permanent collection, along with continuously changing special exhibitions, are on view in the museum’s 46 galleries Tuesday through Friday from 10 AM to 6 PM, select Fridays from 10 AM to 9 PM, Saturdays from 10 AM to 5 PM and Sundays from 11 AM to 5 PM. NOMA offers docent-guided tours at 1 PM Tuesday – Sunday. The adjoining Sydney and Walda Besthoff Sculpture Garden features work by more than 85 artists, including several 20th and 21st-century master sculptors. NOMA’s Besthoff Sculpture Garden is free and open to the public seven days a week: 10 AM to 6 PM. The New Orleans Museum of Art and the Besthoff Sculpture Garden are fully accessible to handicapped visitors and wheelchairs are available from the front desk. Museum admission is free on Wednesdays for Louisiana residents, courtesy of The Helis Foundation. Children 12 and under receive free admission. Teenagers (ages 13-19) receive free admission courtesy of The Helis Foundation.