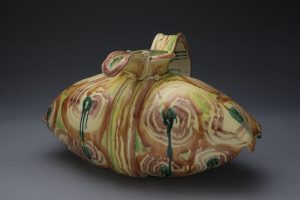 Betty Woodman, a pioneering ceramicist, died on January 2, 2018, at age 87. A trailblazer in her field, in 2006 Woodman was the first living female artist to be honored with a retrospective exhibition by the Metropolitan Museum of Art in New York. One of her signature pillow pitchers is currently on display at NOMA in the exhibition Personalities in  Clay: American Studio Ceramics from the E. John Bullard Collection.

Born in Norwalk, Connecticut, in 1930, Woodman was among the first generation of graduates at Alfred University’s School for American Craftsmen, which opened in 1946 in rural western New York after relocating from Dartmouth University. The studio-oriented school was established to uphold the role of fine crafts in a consumer environment of increasing industrialization and mass production. “When I started out, ceramics was not even a material you made art out of,” Woodman told the Guardian newspaper in 2017. “People might have liked what I was doing, responded to it, bought it, eaten off of it, but it had nothing to do with being an artist—it was about being a craftsman.”

By the 1970s, Woodman’s creations transcended mere beauty and practicality as she leapt from making dinner sets and decorative crockery to create ceramic sculptures that have defied categorization. She has also revisited functional forms like vases, pitchers, bowls, and trays, to construct and reconstruct these utilitarian objects time and again. Woodman’s vision was influenced by time-honored ceramics traditions of ancient cultures that she encountered in her global travels. The Smithsonian American Art Museum describes her work as inspired by “Greek, Etruscan, European, and Asian cultures” with a “mature style [that] focuses on ceramic pieces that appear functional but in reality are not.”

Mel Buchanan, NOMA’s RosaMary Curator of Decorative Arts and Design, describes Woodman as a bold visionary. “Her colorful experimentation with humble ceramics elevated domestic objects to the scale and grandeur of fine-arts display. Betty Woodman advanced her unique vision in what was a decidedly ‘macho’ world of ceramic arts at mid century.”

Artist and writer Jeff Perrone has also written about Woodman’s distinctive approach to ceramics: “As a body of work, her ‘style’ is an ever-changing constellation of ceramic styles. … This ceramic eclecticism is an implicit critique of modernist ‘purity,’ the leveling of variety and difference. But Woodman’s eclecticism, her pluralism is not a scrambling or confusion of systems. It is the selection of what is best from various styles; it requires more care, more orderliness to be an eclectic than to apply a single standard or adhere to a single model.”

Woodman’s work is more than fifty museum collections, including the Metropolitan Museum of Art (New York), the National Gallery of Art (Washington), the Museum of Fine Arts (Boston), the Musée des Arts Décoratifs (Paris), and the Victoria and Albert Museum (London). As a reflection of her broad range of historical references, for the 2016 Liverpool Biennial, she created a permanent bronze fountain in the British port city that incorporated imagery and decoration from Greek and Etruscan sculpture, Minoan and Egyptian art, Italian Baroque architecture, and the paintings of Bonnard, Picasso, and Matisse. (Watch the video below as Woodman describes her commission.) Woodman also spent more than forty years as a teacher and received numerous lifetime achievement awards, NEA fellowships, and honorary doctorates. She was named to the American Craft Council College of Fellows in 1993.

In 2016, Woodman told the New York Times, “I still have the naïve belief that having beautiful things around you might make you a better person.”