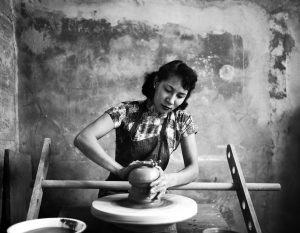 NEW ORLEANS – The New Orleans Museum of Art (NOMA) presents Katherine Choy: Radical Potter in 1950s New Orleans, on view now through April 23, 2023. An innovative artist in a number of mediums, Katherine Choy (American, b. China 1927–1958) developed radical ceramic work that was distinctively her own. In her short mid-1950s career in New Orleans, Choy was a national leader in evolving ceramics from utilitarian objects into the purview of expressive fine art.

This exhibition and forthcoming catalogue Katherine Choy: Radical Potter in 1950s New Orleans mine archives and gather oral histories to tell the story of an artist that was widely celebrated by the American craft world, but who has been nearly forgotten. NOMA’s exhibition is the first presentation of Choy’s ceramics in New Orleans since the artist’s Louisiana friends mounted the Katherine Choy Memorial Show at the Orleans Gallery in fall 1959.

“A star of midcentury experimental ceramics, Katherine Choy indelibly left her unique mark on New Orleans, while continuing the great tradition of pottery at Newcomb College,” said Susan Taylor, Montine McDaniel Freeman Director. “NOMA’s exhibition celebrates the artist’s assuredness in a radical vision for what artists working in clay can contribute to the world.”

Katherine Po-yu Choy was born into an affluent merchant family in Hong Kong. During her childhood in Shanghai, Choy experienced privilege and a fine education but also the upheavals of war, including the occupation by Japan. In 1946, Katherine Choy left her home to study in the United States, earning degrees from Mills College in Oakland, California, followed by a prestigious fellowship at Cranbrook Academy for Art in Michigan. At age 24, Choy, already a rising star of American craft, became director of ceramics at Newcomb College in New Orleans. Soon after, NOMA (then the Delgado Museum) presented Ceramics by Katherine Choy, one of many exhibitions of her modern ceramics across the United States. Choy was one of the early members of the Orleans Gallery, a collective of like-minded artists who fostered contemporary work in New Orleans.

Choy’s early pots show inspiration from Asian ceramics, as was popular among American potters in the 1950s. She mastered classic forms and applied calligraphy-like brushwork, but she increasingly expanded from those clay traditions. Her jagged, painterly vessels were as artistically advanced as any made elsewhere in the United States. A considered departure from the refinement of her training, Choy’s pots sprouted additional necks, could be aggressively large or asymmetrical, and had glazes that intentionally left parts of the raw clay exposed for all to see. Her enlarged, abstracted pottery conveyed—in a new approach from the world of painting—that ceramics, too, could be a canvas for emotional expression.

The artist’s ambition led her away from Newcomb in 1957, when she left New Orleans to found the Clay Art Center in Port Chester, New York. While establishing her collaborative artist’s center, and as she was preparing work for the 1958 Brussels World’s Fair, Katherine Choy died unexpectedly at age 30 in February 1958. Shocked by Choy’s untimely passing, colleagues at Newcomb remembered her “eager spirit and probing mind,” and artist friends at the Orleans Gallery organized an exhibition of her works.

NOMA’s exhibition Katherine Choy: Radical Potter in 1950s New Orleans brings together 25 pots from the permanent collection of NOMA, local loans from the Newcomb Art Museum and the artist George Dunbar, and from the Clay Art Center, which is still in operation.

“Katherine Choy’s powerful ceramic works demonstrate remarkable achievements during a short career, and this celebratory exhibition aims to place her as a major contributor to the advancement of modern pottery,” said Mel Buchanan, RosaMary Curator for Decorative Arts and Design. “Presented at NOMA is a significant body of work by an accomplished artist who created objects that were revolutionary in the 1950s, and that still look fresh today.”

Katherine Choy: Radical Potter in 1950s New Orleans is curated by Mel Buchanan with Winston Ho and is supported by the Elise M. Besthoff Charitable Foundation, George Dunbar, and Charles L. Whited Jr. Special thanks to the artist’s family, Reena Kashyap and the Clay Art Center, and the Newcomb Art Museum.

The exhibition catalogue for Katherine Choy: Radical Potter in 1950s New Orleans will be available in fall 2022. The publication looks at the artist’s biography, her network of teachers, students, and colleagues, her contribution to the field of ceramics, and her merging of artistic expression with handcraft in the mid-1950s.