On Friday, August 25, at 7 p.m., the New Orleans Museum of Art will play host to the premiere of Designing Life: The Modernist Architecture of Albert Ledner, a documentary that chronicles the career of an architect whose vision shaped the built environment in New Orleans and other major American cities in the latter half of the twentieth century. Ledner’s commissions in New Orleans include the landmark “Ashtray House” (the Sunkel Home, so named for the 1,200 embedded amber ashtrays that circle the facade) and the light-infused Galatoire residence, both built on Park Island in the 1960s, and National Maritime Union headquarters in San Francisco, Baltimore, Mobile, Houston, and New York, where the Manhattan office tower recognized for its rows of oversized portholes has recently been repurposed as the Maritime Hotel.

On a lark, following his tour of duty in World War II, Ledner traveled to Frank Lloyd Wright’s rewnowed Taliesin school in Wisconsin to seek an apprenticeship under the G.I. Bill. He became an acolyte of the famed architect but soon returned to his hometown where he became the visionary of bold, new residential designs taking hold in a postwar, futuristic America. Today, at age 93, Ledner continues to consult on architectural projects and renovations. Ledner’s daughter, Catherine, and her cousin, Roy Beeson, spent two years assembling interviews, blueprints, vintage photographs, and extensive footage of the interiors and exteriors of Ledner-designed structures for the 47-minute film. 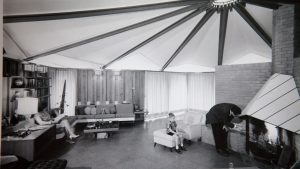 Interior of the Ledner House in New Orleans, designed in 1959. 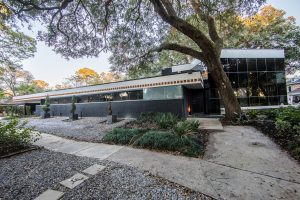 The Sunkel residence on New Orleans’ Park Island is better known as the “Ashtray House.” The frieze of 1,200 amber ashtrays affixed to the building were inspired by the owner’s smoking habit. As Albert Ledner discussed floor plans with the Sunkels, he suggested using ashtrays as a linear motif and the owners were enthralled with the unconventional idea.

“I wanted to find what made my father see things in his own way, to understand his vision,” says Catherine Ledner. “I think I’ve accomplished that.”

Designing Life is among more than fourteen films that will screen at four locations across New Orleans from August 24–27 as part of the second-annual Architecture and Design Film Festival, sponsored by the Louisiana Architectural Foundation. For a complete list of films and screen times, visit the festival’s website.

Admission is FREE to NOMA members. Standard entrance fees apply to all others. NOMA is also participating in Museum Month throughout August that allows for reciprocal free admission to members of sixteen museums in the city. Watch the trailer for Designing Life below, followed by an interview with Catherine Ledner:

When did you decide to make this documentary about your father?

I’ve always wanted to do a film on my dad, but I knew it was too big of an undertaking for just me. My cousin Roy Beeson was in town, shooting the Prospect.3 art exhibition two years ago—we’re both still photographers—and he had never met my father since he’s a cousin on my mother’s side. They came here to NOMA and walked around the sculpture garden. Roy called me right away and he said, “You know, we have to do a film on your father.”

Growing up, my brothers and I, we took our father’s work as an architect for granted because it’s the petri dish that we were raised in. We lived in a very modern house, with sliding windows everywhere, but I always wanted to live in an uptown house like my friends, with like tall ceilings, wood floors, and big windows, all the traditional stuff you find in an old New Orleans house. I went to NYU for college it made me feel really comfortable to have my father’s buildings right there next to me on the West Side of Manhattan—St. Vincent’s Hospital and the Maritime buildings. Since then, New York has really embraced these buildings and preserved them rather than tear them down.

How is your father’s work appreciated in New Orleans?

New Orleans is a very unique city to have a modern house in, because overall the architecture is so culturally reminiscent of Europe. But I think everything that was “then” becomes in vogue at some point later. In New Orleans, particularly post-Katrina, I think there was an appreciation for almost everything that is still standing and still in good shape. I know some modern houses got torn down, but I think in the past decade there’s been a renewed appreciation for modern houses. Much of his work is inspired by New Orleans tradition. Many of his houses are about an inside/outside plan—you can be inside and feel like you’re outside, like rooms facing the courtyards in the older parts of the city.

Your father traveled to Wisconsin in the postwar years to study with Frank Lloyd Wright—uninvited I might add—a very bold quest for an aspiring architect. What did he tell you about working with Mr. Wright?

In terms of being intimidated by Frank Lloyd Wright, I don’t think my father was intimidated by anybody. I think he’d walk up to just about anybody and put out his hand and give a smile and say hello. So I think perhaps he got some of that from his mother, Beulah Ledner, because she was very much the same way. She opened her own tea room and became a businesswoman in the Great Depression and went on to run a very successful bakery. She introduced the doberge cake to New Orleans!

The film portrays your father as a bold architect and individual, someone who was not afraid to take chances. What did you discover in the course of filmmaking?

I always wanted to know as both a filmmaker and daughter, how did my father get this crazy brain that allows him to think differently, see differently. We’re all unique, but he’s really different, in a lot of ways. I was really searching for that. At the very end of the film, he answers that question with “I don’t really know, it just comes naturally to me.”