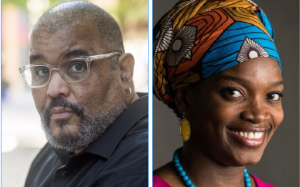 The MacArthur Foundation recently announced its prestigious Fellows recipients for 2017. Among the awardees are two artists whose works either have or will appear at the New Orleans Museum of Art: photographer and educator Dawoud Bey and painter Njideka Akunyili Crosby. Bey’s photographs were recently displayed in the exhibition NEW at NOMA: Recent Acquisitions in Modern and Contemporary Art, and Crosby will be among the artists represented in the forthcoming Prospect.4 exhibitions opening November 18.

Established in 1981, the MacArthur Fellows Program is intended to encourage people of outstanding talent to pursue their own creative, intellectual, and professional inclinations. In keeping with this purpose, the Foundation awards fellowships directly to individuals rather than through institutions. Recipients may be writers, scientists, artists, social scientists, humanists, teachers, entrepreneurs, or those in other fields, with or without institutional affiliations. They may use their fellowship to advance their expertise, engage in bold new work, or, if they wish, to change fields or alter the direction of their careers.

Njideka Akunyili Crosby is a figurative painter whose large-scale works express the hybridity characteristic of transnational experience through choices of subject matter, materials, and techniques.

Born and raised in Nigeria but living now in the United States, Crosby layers paint, fabric, and photographic source imagery that she transfers or collages onto her surfaces. She constructs scenes that often include figures, sometime family members, situated in domestic settings. Gleaned from family photos, cutouts from Nigerian newspapers and magazines, and commemorative cloth, the appropriated elements signal the works’ engagement with the world beyond the here and now of the interior scene described—the world of events and history, both collective and personal. For example, in Nwantini (2012), the light and shadows that define the left arm and thigh of the recumbent male figure are the effect of carefully arranged photographic representations of a range of domestic, commercial, and historical scenes. Thus, the painting contains a density of references that convey meaning across multiple registers and speak to disparate times and places simultaneously. This layering also lends a ghostly quality to the pieces. In Super Blue Omo (2016), the legs of the seated female figure appear to be projected onto the work’s surface. Many layers of materials from different sources overlay one another, with the final effect being that of an image that refuses to stay fixed, vacillating across different cultures and traditions. While her source imagery often references her African heritage, Akunyili Crosby’s works also frequently depict her experiences living in the United States and the point of contact where cultures meet—for example, I Still Face You (2015) portrays her American-born husband seated at a table with her family.

In her explorations of the complexities of forging identity in a globalized society, Akunyili Crosby is developing an inventive yet accessible representational strategy for understanding culture and history from multiple viewpoints all at once.

Dawoud Bey is a photographer and educator whose portraits of people, many from marginalized communities, compel viewers to consider the reality of the subjects’ own social presence and histories. Through his expansive approach to photography—which includes deep engagement with his subjects and museum-based projects—Bey is making institutional spaces more accessible to the communities in which they are situated.

During a residency in 1992 at the Addison Gallery of American Art at Phillips Andover Academy in Andover, Massachusetts, Bey embarked on what would become an ongoing series of portraits of high school students. He made his artistic practice more public and accessible, involving the students in shaping their own representations and working in a semi-public studio. The resultant large-scale, multiple-image works are powerful expressions of the youthful subjects’ respective individualities, still in the throes of being formed and negotiated. Bey expanded on this project in Class Pictures (2002–2006), a body of work produced in collaboration with young people and institutions throughout the United States. In addition to playing a role in the construction of their psychologically rich portraits, the students provided written texts about themselves to accompany Bey’s photographs of them, creating another layer of evocative self-definition. The exhibitions, public programming, and educational outreach Bey conceived as components of Class Pictures turned the museum into a vehicle for creating a closer relationship between institutions, youth, and the communities they inhabit.

More recently, Bey has focused on the construction of collective history and memory. In The Birmingham Project (2013), he commemorates the lives of six children killed in the 1963 bombing of the Sixteenth Street Baptist Church and its aftermath in Birmingham, Alabama, through a series of portraits of Birmingham residents whose ages correspond either to the ages of the children in 1963 or to how old they would have been fifty years later in 2013. In another recent project, Harlem Redux (2014–2017), Bey returns to the site of his first project, Harlem, U.S.A. (1975–1979), but in this instance he focuses on the urban landscape and its transformation spurred by gentrification. Through his own work and long-time commitment to educating and mentoring young artists, Bey is redefining the role of photography and portraiture as active agents in the examination and formation of communities.