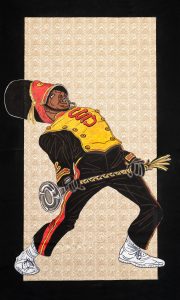 NEW ORLEANS, LA – The New Orleans Museum of Art (NOMA) presents NEW at NOMA: Recent Acquisitions in Contemporary Art, on view through June 26, 2022. NEW at NOMA spotlights contemporary art recently purchased or gifted to the museum and focuses on works by BIPOC, LGBTQIA+, and female-identifying artists. The second in a series of exhibitions that began in 2017, NEW at NOMA reflects the museum’s ongoing commitment to diversify the permanent collection and exhibit work that is reflective of the community that it serves. The installation, which will rotate over time, features work by local, national, and international artists, and champions the work of emerging and underrepresented voices, including those within New Orleans.

“The acquisitions presented in NEW at NOMA reflect the museum’s ongoing commitment to new voices in contemporary art,” said Susan Taylor, Montine McDaniel Freeman Director. “We are delighted to bring these artists into the museum’s permanent collection as we continue to build a collection for the future.”

In 2020, NOMA dedicated its available acquisition funds to purchasing works by BIPOC artists; more than half of the 20 works acquired are by artists from or working in New Orleans. As NOMA strives to become even more equitable and inclusive, the museum’s commitment to addressing exclusions in the past by collecting through new acquisitions will continue through 2021 and beyond.

“NOMA hopes that this installation, and the conversations it evokes, will help shape our future collecting and continue to help NOMA create a lasting dialogue with New Orleans’s creative community,” said Katie Pfohl, Curator of Modern and Contemporary Art.

Alia Ali’s two pieces, Blue Pearls and Ochre Waves, ask us to think about the people, cultures, and histories behind the fabrics we wear. Firelei Báez’s painting the trace, whether we are attending to it or not (a space for each other’s breathing) pictures a ciguapa—an elusive female figure from Dominican folklore—bending over a 1930s map of New Orleans, creating a bridge with her body. Diedrick Brackens’s If you feed a river mines weaving as a potent metaphor for reimagining individual and cultural identity. Jonathan Lyndon Chase’s painting They got a crush on him depicts queer Black love and community in urban and domestic spaces. Keith Duncan’s painting Grambling State University Drum Major 2 celebrates one of New Orleans’s most important cultural events: the Bayou Classic Battle of the Bands between Grambling State and Southern University’s marching bands. Torkwase Dyson’s four canvas painting Way Over There Inside Me (Ocean as super throughway #4) mines the shapes and forms of architecture and infrastructure, to imagine how these systems might be reshaped from within. Heidi Hahn’s painting Burn Out in Shredded Heaven features two women engaging in a conversation just between themselves, who evade our efforts at full apprehension. Ana Hernandez’s mixed media work A Sense of Memory explores the rhythms of nature and the patterns of our thoughts, memories, and actions. Lonnie Holley’s sculpture Supported by the Power shapes discarded electrical wires into the silhouettes of people, asking where our true power really comes from. Caroline Kent’s painting An Improbable Concoction is inspired by the act of translation—the way meaning can shift across contexts or cultures. Norah Lovell’s three paintings from her Reconnaissance: Battle of New Orleans series depart from the myths of white male heroism that often surround the battle, instead reconstructing the voices of women absent from the story. Pat Phillips’s painting Red to Yellow Kill a Fellow confronts the painful realities of the prison system in Louisiana, particularly the state’s exploitation of incarcerated people for low wage labor. Gabrielle Garcia Steib’s video The Past is a Foreign Country weaves together personal and archival photographs and Super 8 film from her family’s archive created between Nicaragua, Mexico, and New Orleans from the 1950s onward. Lorna Williams’s sculpture Lore combines roots, bike parts, and cast plaster teeth to explore how our roots form our identities and shape our ways of being in the world. Purvis Young’s painting celebrates the culture and history of the neighborhood where he grew up in Overtown, Florida.

The New Orleans Museum of Art, founded in 1910 by Isaac Delgado, houses more than 40,000 works of art encompassing 5,000 years of history. Works from the permanent collection, along with continuously changing special exhibitions, are on view in the museum’s 46 galleries Tuesday through Sunday, 10 am to 5 pm. The adjoining Sydney and Walda Besthoff Sculpture Garden features work by more than 90 sculptures, including works from several 20thand 21st-century master sculptors. NOMA’s Besthoff Sculpture Garden is open to the public seven days a week, 10 am to 6 pm. The New Orleans Museum of Art and the Besthoff Sculpture Garden are fully accessible to visitors with disabilities. Wheelchairs are available from the front desk. Museum admission is free on Wednesdays for Louisiana residents, courtesy of The Helis Foundation. Children 12 and under receive free admission. Teenagers (ages 13-19) receive free admission courtesy of The Helis Foundation.