Two recent contemporary art acquisitions reflect NOMA’s commitment to collecting work that resonates on a local level while also addressing global concerns. These artists explore histories of New Orleans and the broader region to create contemporary works that respond to larger social and political issues. Their art bridges perceived divides between past and present, local and global, and the personal and political. These artists work across many different media: painting, film, cartography, animation, and installation. These additions to the permanent collection reflect NOMA’s commitment to supporting artists who work across different media and forms to offer new perspectives on what it means to make and share contemporary art today.

The following new acquisitions are on view in the exhibition Mending the Sky through January 31, 2021. 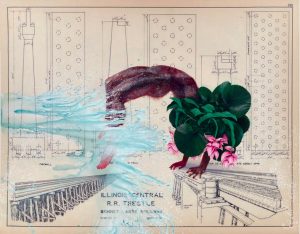 Firelei Báez, the trace, whether we are attending to it or not (a space for each other’s breathing), 2019, Acrylic, oil, and transfer on archival printed canvas, 90 x 114 3/8 inches, Museum purchase, Carmen Donaldson Fund, Courtesy of the artist and James Cohan, New York, Photo by Phoebe d’Heurle, © Firelei Báez, 2019.34

Firelei Báez is internationally recognized for fierce, often fantastical portraits of women. Báez’s newest body of work focuses on key chapters from New Orleans’s past. In these new paintings, Báez overlays figures, symbolic imagery, and calligraphic gestures onto architectural surveys from the 1930s-era Historic American Buildings Survey, a project of the Works Progress Administration, of significant sites across New Orleans. Blurring the lines between past, present, and future, Báez paints new imagery upon these archival drawings, and in the process overwrites the often divisive history these older documents represent. Báez carries portraiture into a space where identity is rooted in history, but can likewise become untethered—and liberated—from it.

Baez’s the trace, whether we are attending to it or not (a space for each other’s breathing), which comes from this series, features a ciguapa—an elusive and cunning female creature from Dominican folklore—bending over an architectural plan of the Illinois Central Railroad trestle to unite both sides of the tracks. Historically, railroad lines have often delineated boundaries between communities, reinforcing racial and class stratification. Spanning a bridge, this ciguapa crosses historical lines of segregation, and also references the role of this railroad line—which runs between New Orleans and Chicago—in the history of the Great Migration. As the artist has shared about this painting’s protagonist, “She is quite literally bridging and forming space for communities to be able to carve out belonging and breathe.” 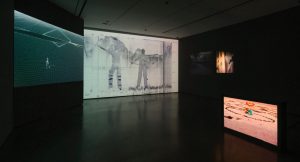 Un chemin escarpé / A steep path is a five-channel video installation in which Jamilah Sabur draws upon metaphysics, geology, and familial ties to reframe the landscape and history of the Caribbean. Throughout the work, Sabur films herself as a shape-shifting figure that traverses and communes with various sites in the Caribbean to unlock hidden histories and reveal contemporary, physical realities of the islands. Sabur’s title alludes to the geological form known as an escarpment, a steep cliff formed by erosion at sites where land meets sea. Adopting the role of explorer, Sabur reimagines a figure often associated with the violence of colonialism as a source for uncovering new histories. Throughout the video installation, she carries a rhomboid object, a shape that comes from an architectural feature of her mother’s childhood home in Jamaica. This shape references Sabur’s own experience of migration from Jamaica to Miami, and her experience living in the U.S. as an undocumented immigrant for two decades. In the installation, the rhombus is a navigational tool that allows the artist to find her way through unknown territories. In one sequence in the film, Sabur navigates an animation (created with found imagery that the artist animates) of the Vema Fracture Zone, an underwater mountain range that is of great interest to oceanographers. This site, which today is experiencing extreme sea-floor spread due to climate change, has long been the focus of historians interested in its role as one of the main arteries of the transatlantic slave trade. Sabur’s installation activates these connections between geology, environment, and history through a series of performances in which she reconfigures and reimagines these landscapes from within.

—Katie A. Pfohl, Curator of Modern and Contemporary Art