Singer-songwriter Kelly Love Jones brings a star-studded cast to NOMA’s Lapis Center for the Arts on Thursday, November 18, for an evening of music, visual art, dance, and theater. Presented in collaboration with PowerHouse Productions, TRUST invites us to let our guard down and believe in our own power. In advance of the performance, Jones sat down with Gabrielle Wyrick, NOMA’s Deputy Director of Learning and Engagement, to give a sneek peek behind the stage of the brand new work. 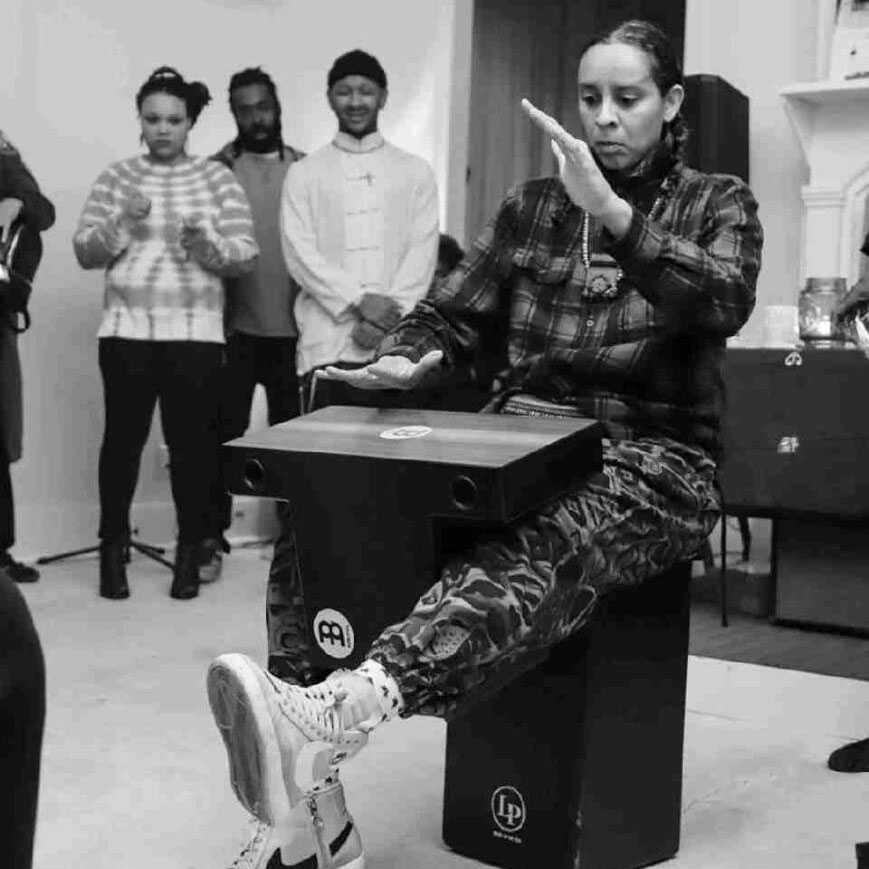 Photo by Johnathan B. Vasquez.

Tell me a little about TRUST.

Jones: TRUST is my second production in what will eventually be a series of three. The first performance was entitled Pitch Dark, and was staged at the Music Box Village in 2019.

TRUST is based upon having the ability to trust in yourself, trust in creating, trust in the process. With that motion of moving with trust, you allow for the energies of what is existing to create something magical. Within this performance, we’ve created a set that is open to the involvement of not only the musicians and performers, but from the audience as well. We want to encourage all who are present to trust in the environment. Knowing that you are with people who are there to support you, to allow you to create something. All the people around you are there to help you elevate yourself to a place of opening up, and freeing up, and just being who you are.

How did the project come about? What made you want to do this iteration?

Jones: TRUST is also the name of my current album that’s going to be released later this fall. When I was given the opportunity to work with NOMA, I knew I had to push myself to be super creative about the experience, because the venue calls for that type of journey. It came at a time when I wanted to create the second production in the series, but I really wanted the meaning of my art to carry on to a broader audience, to a bigger stage to show where I am in my process. The experience of planning this production has helped me to trust myself and my own movements of what I feel is creativity.

You could perform, and have performed, all over the city of New Orleans. I’m curious—what is the significance is of having the performance at NOMA at this moment as opposed to other possible venues?

Jones: There’s been something very magical in having the opportunity to see the background of something being created at NOMA, seeing the skeleton of it, being behind the scenes and then seeing it come alive. I truly believe that what I’m developing with the museum is being handled like a newborn and executed to its fullest, without a doubt. The team that I’ve worked with has been nothing but diligent and supportive, and I know they will do everything they can to make this vision manifest.

What do you want attendees to take away from the experience?

Jones: There is an underlying concept of connection in all of my productions that encourages all of us to begin to feel comfortable around people that we don’t necessarily know, or that we wouldn’t necessarily be around in a typical setting.  In Pitch Dark, there were people in a room that was completely dark—they had no idea who was there—but in that moment you had to trust where you were. Moving into TRUST, it’s the same feeling. I always want people to feel that they can be comfortable with who they are and trust that the environment will be open to receive them.

My last question: How did you first become drawn to music and performance?

Jones: I’m what people might call a late bloomer. I got my first guitar when I was 19, from my aunt who was an opera singer. She was a singer, she played cello, she played piano, any string instrument, and she was a great influence in my life. She had a flood in her basement and the only thing that survived the flood was a guitar floating on top of the water. She salvaged that guitar and gave it to me on the condition that I would continue to play music throughout my life. To this day, I’ve kept my promise to her. I feel very proud that I have kept that word.