The Free Hermit Life: Images of Reclusion and Retirement in Japanese Edo-Period Painting 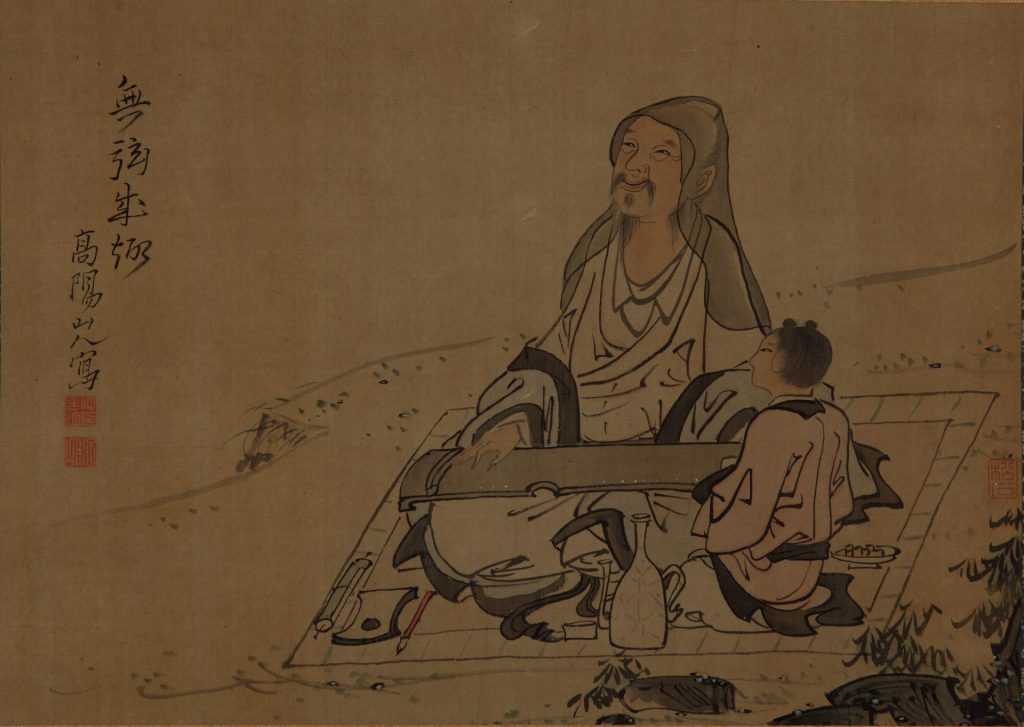 Taking off my official robe, I return to the east,
High aspirations are not as lofty as the free hermit life

Brushed by Kameda Bosai, this excerpt from a tenth-century Chinese poem celebrates the shedding of official responsibilities and the freedom of retirement. Although written a thousand years before the artist’s lifetime, its use attests to the resonance of these sentiments for both artists and patrons in Edo-period Japan (1615–1868). During this time, Japanese artists, particularly those aligned with the Chinese-inspired school of painting called Nanga, adopted and adapted a number of traditional Chinese painting themes; foremost among them the idea of a physical or spiritual retreat from the obligations of everyday life.

Edo Japan was a rigidly stratified society, where one’s role was pre-determined and an individual’s movements were both limited and regulated. Unsurprisingly, the longing to escape the tensions inherent in living in such an environment manifested itself in visual art as well as in literature, poetry, drama, and music. Artists found parallels for their current circumstances in the Chinese traditions of centuries before, as well as in the long tradition of Japanese recluses and exiles in poetry, literature and history.

The ideals of reclusion and retirement were visualized in a number of ways. Most commonly, painters created mountain landscapes sparsely populated by diminutive figures and minimal signs of human habitation. The pavilions, cottages and huts nestled in the cliffs and coves provide shelters wherein gentlemen and their friends could engage in scholarly pursuits or the contemplation of nature. Here, one could escape the worries and cares of everyday life, either permanently, through retirement; or temporarily, through an excursion to the mountains or a visit to a retired friend. Those members of Edo-period society who could not “shake off the red dust of the cities,” to quote another poem in the exhibition, could be rejuvenated for a few moments by looking at paintings like these. By following the paths, walkways and footbridges as they wind past rivers and cliffs, we too can momentarily retreat into this idealized world.

The works in this exhibition are drawn from the permanent collection of the New Orleans Museum of Art.

Tao Yuanming and his Stringless Qin

Ink and color on silk

Gift of Dr. Kurt A. Gitter and Millie Hyman Gitter

Currently on view in the exhibition The Free Hermit Life: Images of Reclusion and Retirement in Japanese Edo-Period Painting is an enigmatic image: a seated man smiling beatifically, his fingers poised above a stringed instrument—one that has no strings.  Read More