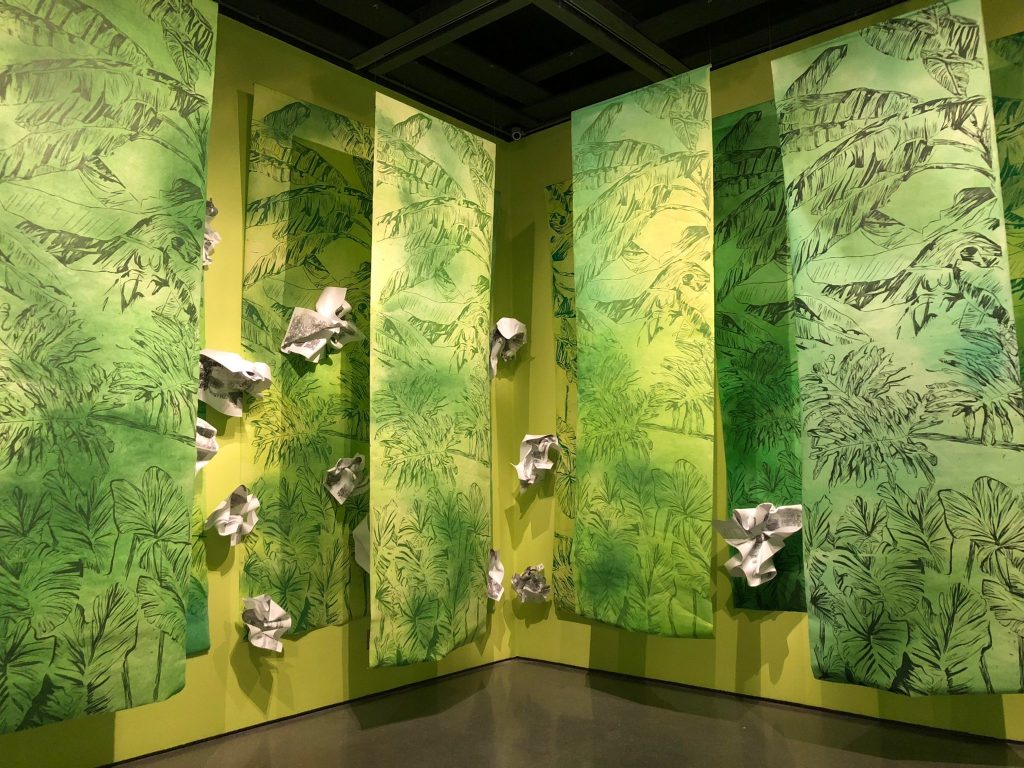 Changing Course: Reflections on New Orleans Histories marks the 2018 New Orleans Tricentennial by bringing together a group of seven contemporary art projects that focus on forgotten or marginalized histories of the city. Projects by artists Katrina Andry, Willie Birch, Lesley Dill, Skylar Fein, L. Kasimu Harris, The Everyday Projects and The Propeller Group each shed light on the past while also looking towards the future, returning to defining moments in New Orleans’ history that continue to frame art and life in the city today. Reflecting on how these histories have shaped our responses to present-day issues and concerns, the included projects also consider how returning to the past can help spur evolution and change, and make a lasting positive impact on the city. During a year of celebration and remembrance, Changing Course invites the city to consider how the act of commemoration can also be a form of forward thinking: a rejoinder to the present that might also change the course of things to come.

Katrina Andry’s large-scale woodblock prints address questions of racial and economic disparity and the uneven urban development in New Orleans after Hurricane Katrina. Her new project for Changing Course considers the impact that past infrastructure projects, such as the construction of I-10, had on historically African American neighborhoods in the city. Lesley Dill’s Hell Hell Hell / Heaven Heaven Heaven: Encountering Sister Gertrude Morgan (2010) pays tribute to the vital legacy of visionary New Orleans artist, preacher and poet Sister Gertrude Morgan. Skylar Fein’s installation Remember the Upstairs Lounge (2008) meditates on the 1973 arson at the Upstairs Lounge, a popular gay bar in the French Quarter, a crime whose unsolved nature still reverberates across LGBTQ communities in the city. L. Kasimu Harris’s War on the Benighted (2015-present) places Black History at the center of a visual narrative that complicates stereotypes of youth, race and criminality. Harris produced this series in collaboration with New Orleans schoolchildren in order to reflect on the history of public education in the city. The Propeller Group’s video The Living Need Light, The Dead Need Music (2014) offers a powerful meditation on the cyclical nature of time and history, drawing points of connection between real and fantastical funerary rituals of South Vietnam as well as the cultural traditions of Vietnamese communities in New Orleans.

Two additional project components offer spaces for reflection about how these New Orleans histories impact different communities across the city, and spur conversations about how we might use art to shape the city’s future. Willie Birch’s installation will frame an evolving discussion platform at NOMA, one that also refers museum visitors to associated artwork and performances staged offsite at a community driven arts-space Birch is creating in New Orleans’ Seventh Ward. The Everyday Projects, a collective of photojournalists who use social media platforms to combat media-driven representations of communities worldwide, will bring their Pulitzer Center-sponsored curriculum to New Orleans. In collaboration with NOMA and the New Orleans Photo Alliance, this outreach program seeks to encourage participants to use photography to share their unique perspectives on life in their neighborhoods throughout Greater New Orleans.

Changing Courseis organized by the New Orleans Museum of Art and is supported by Pia and Malcolm Ehrhardt, Stewart and Renee Peck, Cathy and Morris Bart, Dathel and Tommy Coleman, and David Workman.

Changing Course marks the first major museum exhibition for New Orleans based artist Katrina Andry, a printmaker whose large-scale woodblock prints offer incisive commentary on contemporary social issues surrounding race, class and social justice. For this exhibition, NOMA has commissioned Andry to create a a site-specific installation that addresses the uneven urban development in New Orleans after Hurricane Katrina. Her project will connect the city’s rapid and sometimes controversial recent evolution to more historical examples of redevelopment, combining imagery and text drawn from documentary materials such as maps and development plans with her own imagery and designs. Focusing particularly on the impact of construction and infrastructural development projects such as the creation and expansion of the Interstate 10 elevated expressway, which leveled a prominent middle-class African American neighborhood in the city, her installation, Diverge Divest Deny (repeat), sheds light on the lingering ramifications of such projects on African American communities across New Orleans. 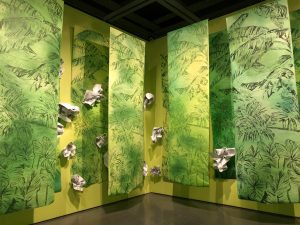 Willie Birch is a New Orleans-based artist who draws inspiration from this city and the complexity of its diverse traditions and histories. Working in a variety of mediums, from paper mache to acrylic and charcoal on paper, he renders second lines, street musicians and the architecture of New Orleans with a nuanced eye towards intimate details—power lines and chain linked fences, discarded sneakers and wood-paneled shot-gun houses that bear traces of their histories. Birch’s recent work questions the role that history plays in determining our present and future. His installation for Changing Course will present new works that focus on roots and bones, the largely invisible structures that both sustain and support what we see above and around them. At the same time, his work will refer museum visitors to associated artwork and performances staged offsite at a community-driven arts space that Birch is creating in New Orleans’ 7th Ward. 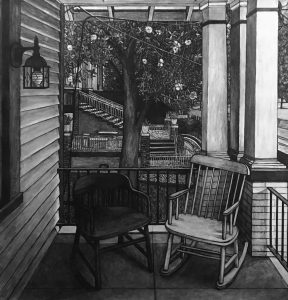 Willie Birch, Waiting for a Serious Conversation on the History of the South, 2017, Acrylic and charcoal on paper, 72 x 75 in., Image courtesy of the artist and Arthur Roger Gallery, New Orleans

New York based artist Lesley Dill’s work explores the relationship between image and text. Changing Course marks the NOMA debut of her installation Hell Hell Hell / Heaven Heaven Heaven: Encountering Sister Gertrude Morgan (2010), which Dill gifted to NOMA in honor of the New Orleans collector Arthur Roger in 2014. Inspired by the life of the late New Orleans preacher, artist and poet Sister Gertrude Morgan, Dill’s installation reflects on the often under-recognized power of women’s voices and writing. Known for her work as a painter, preacher and missionary, Sister Getrude Morgan’s visionary art reflects New Orleans’ longstanding embrace of mysticism, magic and alternative forms of religious expression, from Haitian voodoo to Southern Baptist traditions. Dill’s project combines images and text culled from Morgan’s art to create a layered multi-media installation that speaks to Morgan’s vital artistic legacy as well as the power of prophecy and revelation, both a form of truth-telling about the present and a way of reimagining the future. 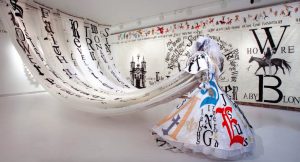 Skylar Fein’s immersive installation Remember the Upstairs Lounge commemorates the 1973 arson at the Upstairs Lounge, a popular gay bar in the French Quarter. Fein, whose work has long explored New Orleans’ many diverse subcultures and informal communities, recreates this space to offer a haunting memorial to the event and those impacted by the tragedy. Comprising both real and fictional memorabilia of the era as well as crime scene photos and charred objects, Fein’s installation examines notions of history, memory, truth and the slippages between them. Though a disgruntled customer was suspected, no one was ever convicted for the crime, which resulted in 32 casualties and countless injuries. Restaging this project almost exactly 10 years after its original presentation in Prospect.1, NOMA’s installation considers the continued reverberation of this unsolved crime for LGBT communities across New Orleans. 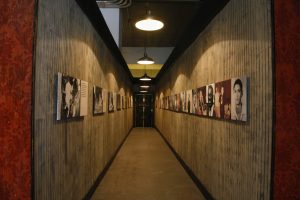 Presented in NOMA’s Great Hall, L. Kasimu Harris’s project consists of large color photographs from his ongoing series titled War on the Benighted. Produced in collaboration with a number of New Orleans students and their families, Harris’ photographs portray a revolution in and around the classroom. Within the narrative Harris imagines, students make entry into a shuttered school building at night, wherein they discover histories that have somehow become clandestine, and empower one another through lessons derived from Black history. Taken together, the photographs position young people as the driving force in their own education while raising questions about how we construct our History and where we tell those stories. New photographs in the series, exhibited for the first time here at NOMA, will underline connections between education and social justice, as well as the history of New Orleans’ schools. 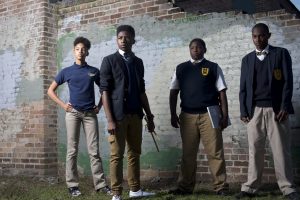 As part of Changing Course, NOMA, the New Orleans Photo Alliance and The Everyday Projects will partner to offer workshops to local schools, aid organizations and community centers in which students and participants will learn to use photography to share their unique perspectives on life in their neighborhoods. The Everyday Projects is a social media and educational outreach program aimed at challenging stereotypes, bridging communities and building visual literacy through photography. It began in 2012 as Everyday Africa, an Instagram account that uses photographs of everyday life to transcend media- driven stereotypes of Africa as a place overrun by disease, poverty, and war. It has since expanded into cities across the country, including Atlanta, Washington D.C., and the Bronx, N.Y. At NOMA, this project will culminate in a display of selected photographs and texts that will dialogue with the artistic projects on view in Changing Course. 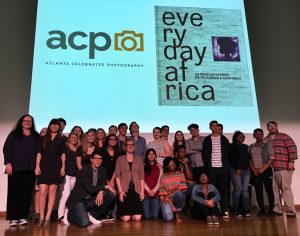 The Everyday Projects, Students from Tri-Cities and Riverwood high schools in Atlanta come together to present their photography to each other as part of a workshop with Everyday Africa and Atlanta Celebrates Photography, 2017.

The Propeller Group was established in 2006 by Phunam, Matt Lucero and Tuan Andrew Nguyen as a cross-disciplinary structure for creating art projects that span video art, film, visual art and installation. The Living Need Light, The Dead Need Music, which premiered during Prospect.3 in 2014, showcases the cultural connections between Vietnam and New Orleans, particularly among the Vietnamese diaspora currently living in the U.S. South. Offering a striking meditation on the cyclical nature of time and history, the film merges documentary footage of actual funeral processions with stunning re-enactments that bring the film into the realm of the abstract, poetic and metaphorical – a rumination on celebration and mourning, and the shared human experiences that bring people together across cultures and geographies. 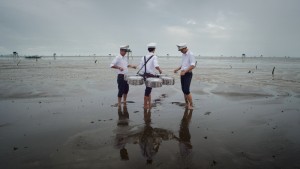 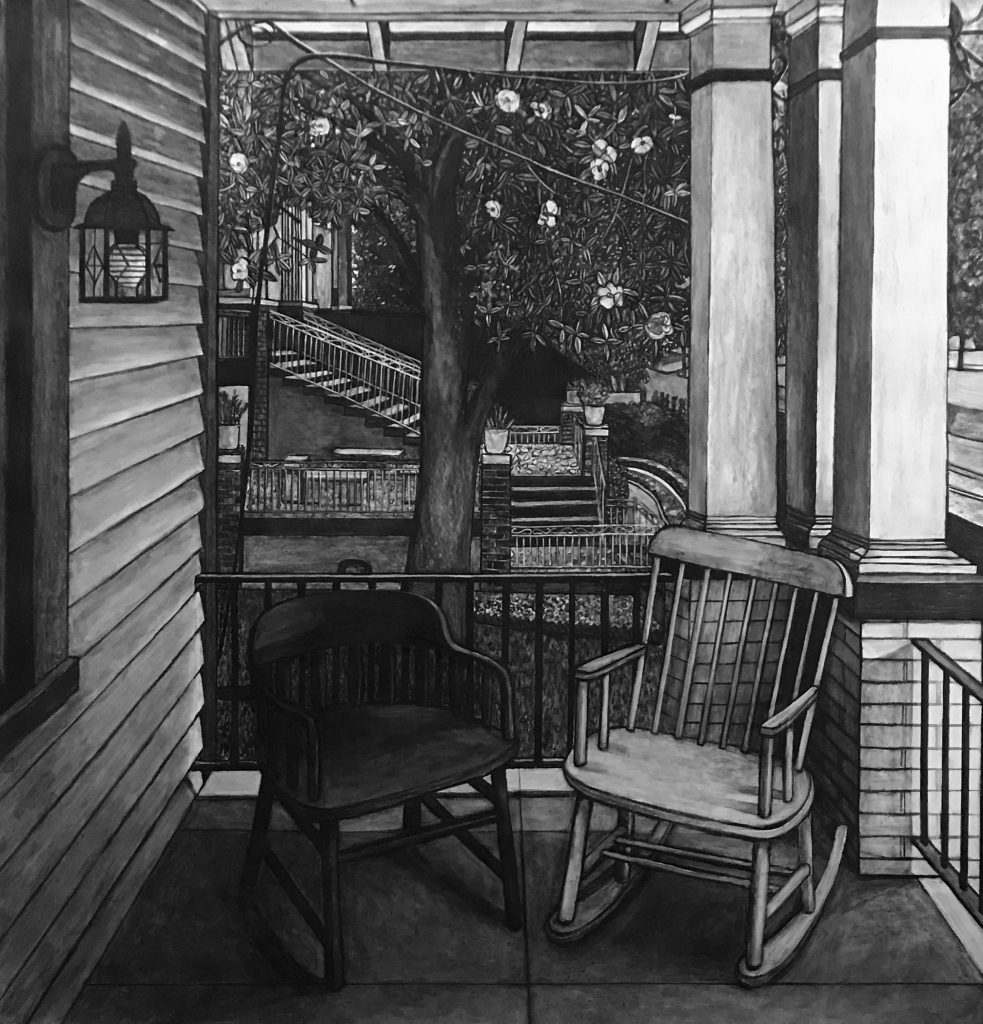 Waiting for a Serious Conversation on the History of the South

Acrylic and charcoal on paper 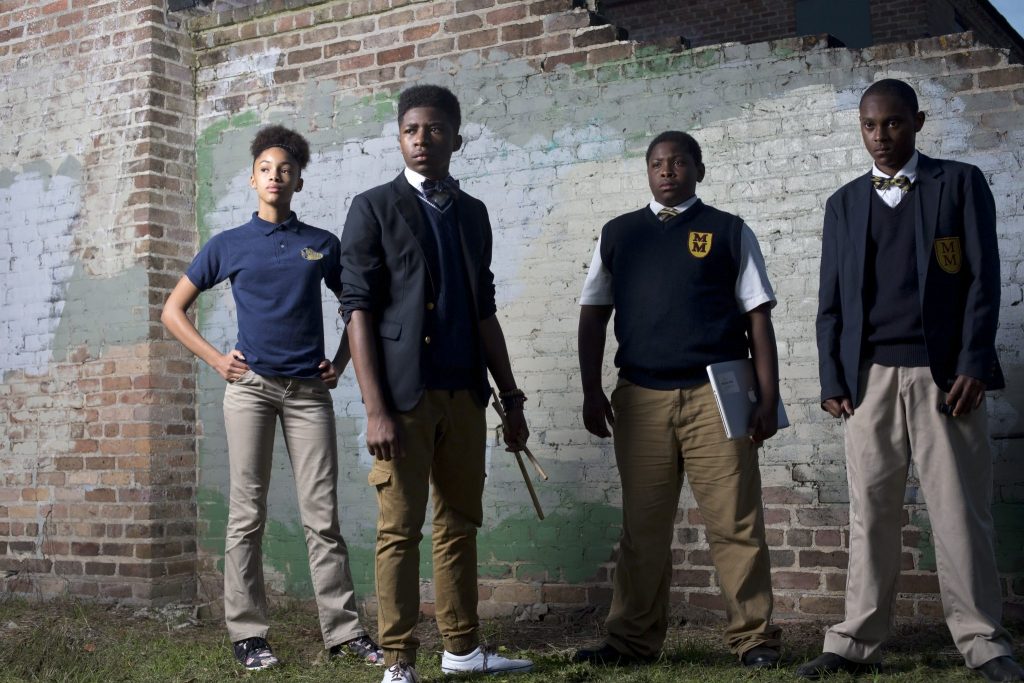 War on the Benighted, #1 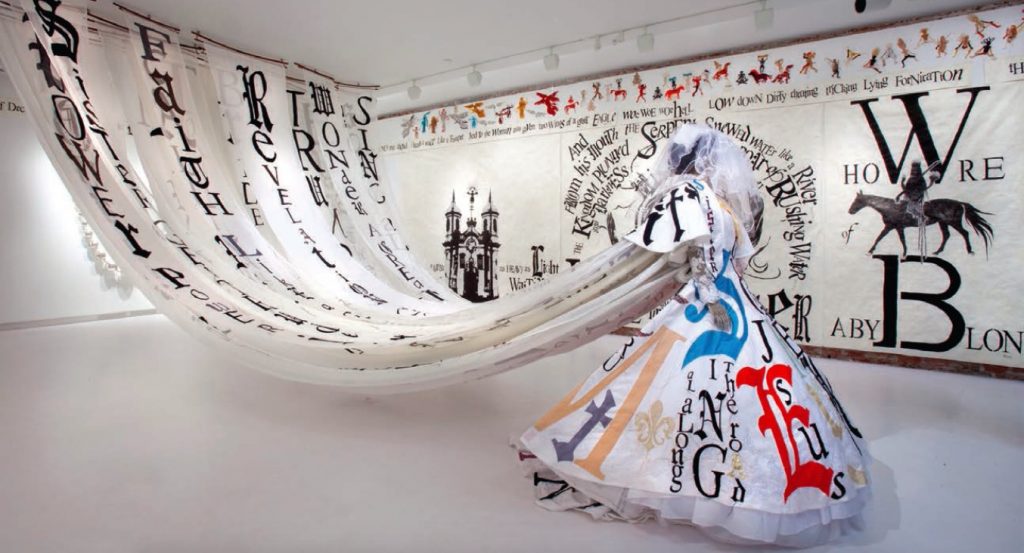 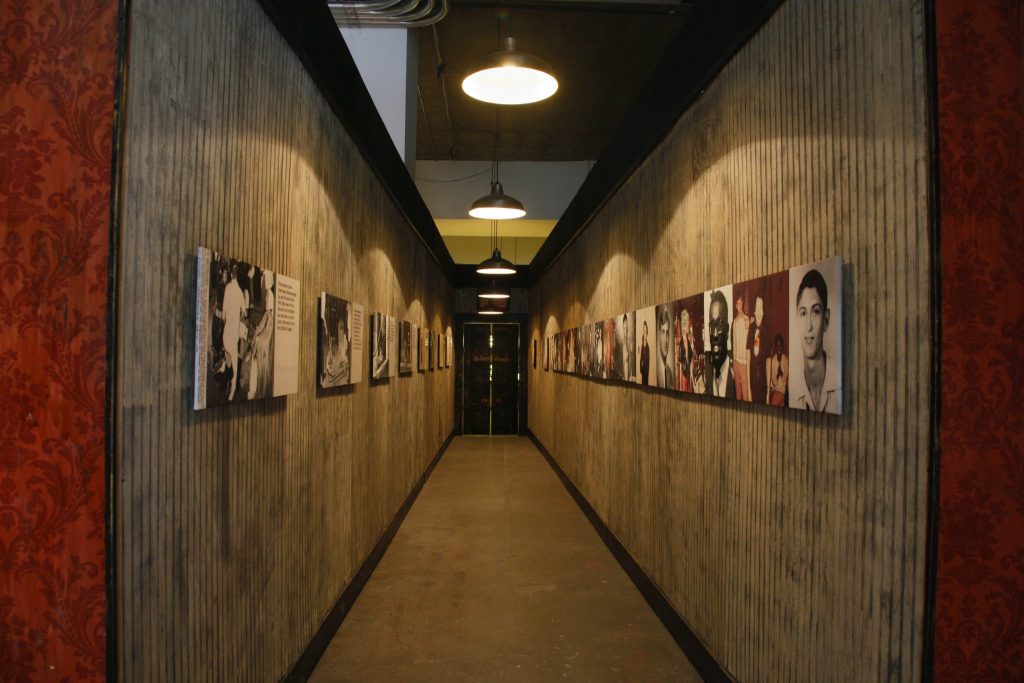 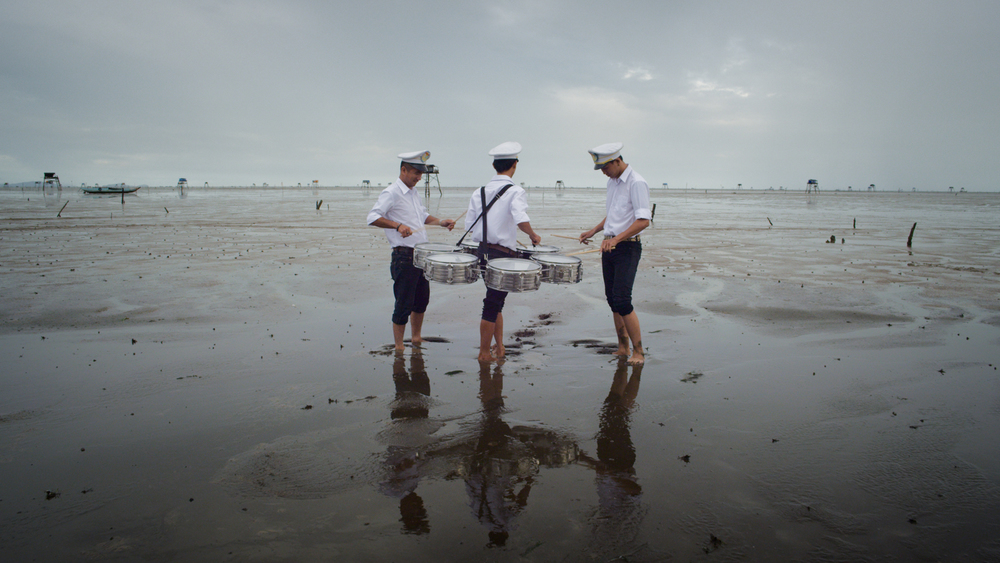 Reflecting on New Orleans Histories: NOMA Explores New Orleans’ Complex Past, and Looks Into the Future

The New Orleans Museum of Art presents Changing Course: Reflecting on New Orleans Histories, an exhibition that celebrates the New Orleans Tricentennial by bringing together a group of seven contemporary art projects that focus on forgotten or marginalized histories of the city. Read More