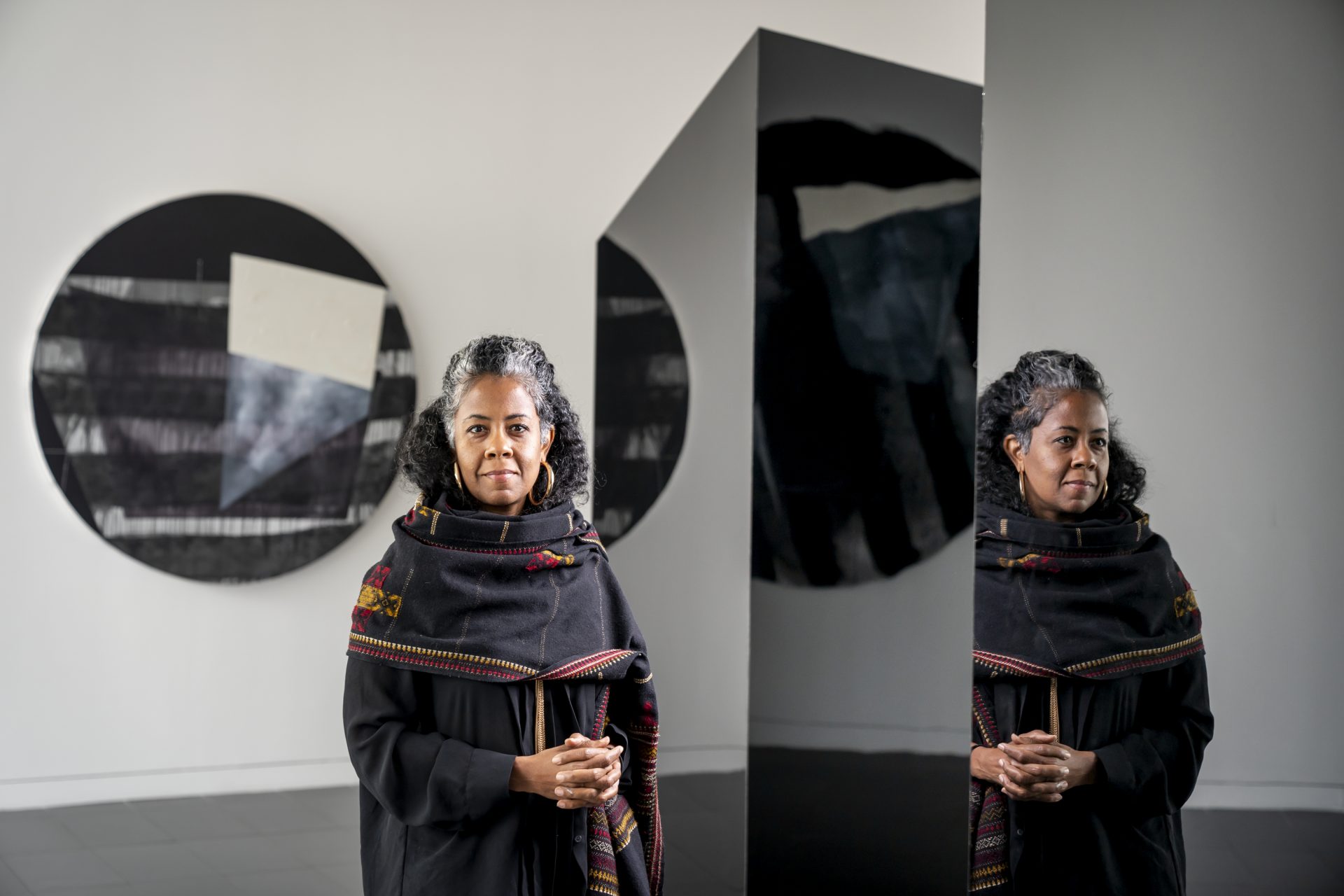 Produced for the New Orleans Museum of Art, a new series of fifteen paintings by Torkwase Dyson are inspired by the design systems of architecture, water infrastructure, the oil and gas industry, and the physical impact of global warming. This solo exhibition examines the legacy of plantation economies and their relationship to the environmental and infrastructural issues of our current age, which many characterize as the “plantationocene.”

Torkwase Dyson was born in Chicago Illinois, and spent her developmental years between North Carolina and Mississippi. Traversing these regions helped develop a fundamental sensitivity towards urban development, southern landscape and black spatial justice. During her years at Tougaloo College where she majored in Sociology and double minored in Social Work and Fine Art, she began to examine the spatial dynamics of black history and how these histories where connected geographically. Over the next 10 years, Dyson traveled to Africa and South and Central America to strategize with communities of color on ways to attain resource equality. During this time she earned her Bachelors in Fine Arts in Painting from Virginia Commonwealth University and her Masters in Fine Arts in Painting from Yale School of Art. In 2016, Dyson designed and built Studio South Zero (SSZ) a solar-powered mobile studio where the context of nomadicity became the framework for learning and making art about the environment. It was traveling with SSZ that inspired her experimental project The Wynter-Wells Drawing School for Environmental Liberation where she explores contemporary theorizations of space, architecture and the infrastructure of extraction economies.

Though working through multiple mediums, Torkwase Dyson describes herself as a painter who uses distilled geometric abstraction to create an idiosyncratic language that is both diagrammatic and expressive. The works are deconstructions of natural and built environments that consider how individuals negotiate and negate various types of systems and spatial order. Dyson’s work has been exhibited at the Studio Museum in Harlem, the Whitney Museum of American Art, The Drawing Center, the Corcoran College of Art and Design, the Schuylkill Center for Environmental Education, and the Smithsonian National Museum of African Art. Dyson has been awarded the Graham Nancy Graves Grant for Visual Artists, Visiting Artist grant to the Nicholas School of the Environment at Duke University, and the Culture Push Fellowship for Utopian Practices. Fellowships include, Graham Foundation, Eyebeam Art,Technology Center Fellowship, and the FSP/Jerome Fellowship. Dyson’s work has also been supported by, Lower Manhattan Cultural Center, The Laundromat Projects, the Green Festival of New York, the Center for Documentary Studies at Duke University, the Mural Arts Program of Philadelphia, The Kitchen, and the Rebuild Foundation. In 2016 Dyson was elected to the board of the Architecture League of New York as Vice President of Visual Arts. Torkwase is now based in Jersey City, NJ

Dr. LeRonn P. Brooks is the Associate Curator for Modern and Contemporary Collections at the Getty Research Institute. Prior to working at the Getty, he was an Assistant Professor of Africana Studies at Lehman College in The Bronx, New York. Dr. Brooks recently served as a curator for The Racial Imaginary Institute, which was founded by author/poet Claudia Rankine, and the Bronx Council on the Arts. At the Getty, Dr. Brooks is the lead-curator for the GRI’s new African American Art History Initiative (AAAHI). His interviews, essays on African American art, and poetry have appeared in publications for Bomb Magazine, The Brooklyn Rail, The Studio Museum in Harlem, Socrates Sculpture Park, The Spelman Museum of Art, Callaloo Journal, The International Review of African American Art as well as The Aperture Foundation, among others.

Allison Young is Assistant Professor of Contemporary Art History at Louisiana State University. A specialist in postcolonial and contemporary art of the Global South, Young received her Ph.D. from the Institute of Fine Arts at NYU in 2017. Her scholarly research and arts criticism has appeared in publications such as Art Journal, Artforum, Apollo International, ART AFRICA and the International Review of African American Art, and she has contributed writing to exhibition catalogues for numerous local, national, and international projects. Before joining LSU, Young was Andrew W. Mellon Foundation Fellow for Modern and Contemporary Art at the New Orleans Museum of Art from 2017 to 2019, where she curated and published an exhibition catalogue for Lina Iris Viktor: A Haven. A Hell. A Dream Deferred.