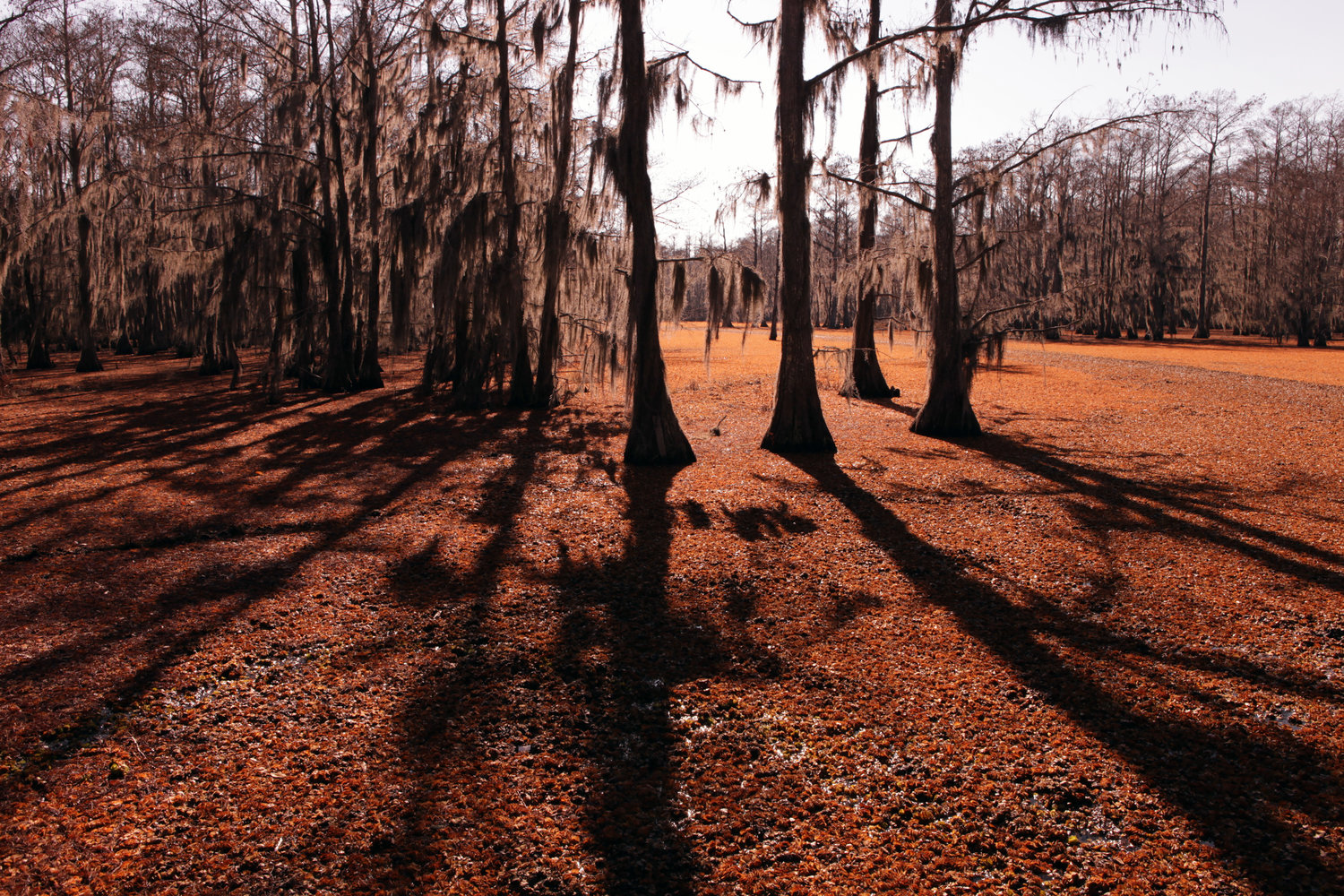 READ MORE ABOUT THE ARTISTS

READ MORE ABOUT THE ARTIST

In conjunction with the exhibition Inventing Acadia: Painting and Place in Louisiana, an ensemble of photographers known as Southerly Gold will present an installation in the Evelyn L. Burkenroad Creative Concept Studio that revisits many of the locations in south Louisiana painted by landscape artists in the 19th-century. Formed in 2011, Southerly Gold consists of Aubrey Edwards, Ariya Martin, and Elena Ricci. The three women will present contemporary photographs of Louisiana’s evolving terrain. The photographers will sign copies of God’s Country, a bound set of six visual guides to parishes that form the corner borders of Louisiana: Caddo, East and West Carroll, Washington, Cameron, the Felicianas, and Plaquemines. Publication of this work was made possible with funding from the Platforms Grant / The Andy Warhol Foundation.

Hannah Chalew is an artist raised and currently working in New Orleans. She received her BA from Brandeis University in 2009 and her MFA from the Cranbrook Academy of Art in 2016. Chalew has exhibited widely around New Orleans and the nation. Her work is in the collections of the City of New Orleans and the Ogden Museum of Southern Art and published in two creative atlases by writer and activist Rebecca Solnit, Unfathomable City: A New Orleans Atlas, co-authored with Rebecca Snedeker, and Nonstop Metropolis: A New York City Atlas, co-authored with Joshua Jelly-Schapiro. In 2018, she was an emerging artist-in-residence at the Joan Mitchell Center in New Orleans. She recently received a Platforms Grant: a regranting effort of Antenna Gallery, Ashe Cultural Arts Center and Pelican Bomb with support from the Andy Warhol Foundation and an Ideascity production grant, funded by the New Museum with support from the National Endowment for the Arts to incubate her work.

NOMA will host the solo exhibition Torkwase Dyson: Black Compositional Thought | 15 Paintings for the Plantationocene, on view from January 14 through April 19, 2020. Dyson was born in Chicago Illinois, and spent her developmental years between North Carolina and Mississippi. Traversing these regions helped develop a fundamental sensitivity towards urban development, southern landscape and black spatial justice. During her years at Tougaloo College where she majored in Sociology and double minored in Social Work and Fine Art, she began to examine the spatial dynamics of black history and how these histories where connected geographically. Over the next 10 years, Dyson traveled to Africa and South and Central America to strategize with communities of color on ways to attain resource equality. During this time she earned her Bachelors in Fine Arts in Painting from Virginia Commonwealth University and her Masters in Fine Arts in Painting from Yale School of Art. In 2016 Dyson designed and built Studio South Zero (SSZ) a solar-powered mobile studio where the context of nomadicity became the framework for learning and making art about the environment. It was traveling with SSZ that inspired her experimental project The Wynter-Wells Drawing School for Environmental Liberation where she explores contemporary theorizations of space, architecture and the infrastructure of extraction economies.

free is a multi-disciplinary artist whose songwriting explores psychic landscapes thru blues and folk traditions using cello, viola, guitar, vocals & loops. They have collaborated with Leyla McCalla and Junebug Productions, among others. As a composer, they score film and radio projects, including Last Call, a queer oral history podcast, where they also serve as a producer, editor, and host. free also had the honor to be one of Found Sound Nation’s One Beat fellows for 2019 and is a member of the New Orleans based ensemble, Les Cenelles.

Serpentine is a queer and femme witch choir based out of Bulbancha/New Orleans, dedicated to healing personal and systemic trauma and rebuilding human connection with the earth. Their songs are stories of resiliency, joy, softness, vulnerability, transformation, survival, and deep love. The choir believes that songs change the shape of culture, that songs raise power to call forth change and justice.

Friday Nights at NOMA is presented by The Times-Picayune/The New Orleans Advocate and supported in part by grant funds from the Azby Fund; Ruby K. Worner Charitable Trust; New Orleans Jazz & Heritage Festival and Foundation; and the Louisiana Division of the Arts, Office of Cultural Development, Department of Culture, Recreation and Tourism, in cooperation with the Louisiana State Arts Council.
+ Google Calendar+ iCal Export