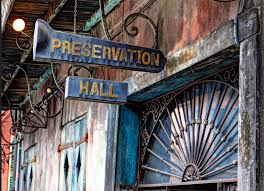 Join Russell Lord, NOMA’s Freeman Family Curator of Photographs, Prints, and Drawings, for a conversation with Ben Jaffe about musicians from the era of the founding of Preservation Hall. Founded in 1961 by Jaffe’s parents, Allan and Sandra, Preservation Hall was intended to preserve the music of New Orleans’ earliest generation of jazz musicians. Many of these legendary performers are pictured in the exhibition Lee Friedlander in Louisiana.

ABOUT BEN JAFFE AND RUSSELL LORD

Born in 1971, Ben Jaffe has lived his whole life with the rhythm of the French Quarter pulsing through his veins. Raised in the company of New Orleans’ greatest musicians, he returned from his education at Oberlin College in Ohio to play with the group and assume his father’s duties as director of Preservation Hall. Today he serves as creative director for both the Preservation Hall Jazz Band and the Hall itself, where he has spearheaded such programs as the New Orleans Musicians Hurricane Relief Fund.

Russell Lord is the Freeman Family Curator of Photographs at the New Orleans Museum of Art. He previously held positions at the Metropolitan Museum of Art and the Yale University Art Gallery. His deepest area of expertise is the origins of photography, but he has written and lectured widely on almost every moment in the history of photography. Lord’s recent publications include Gordon Parks: The Making of an Argument (2013), and contributions to Photorealism: Beginnings to Today (2014) and East of the Mississippi: Nineteenth-Century American Landscape Photography (2017).