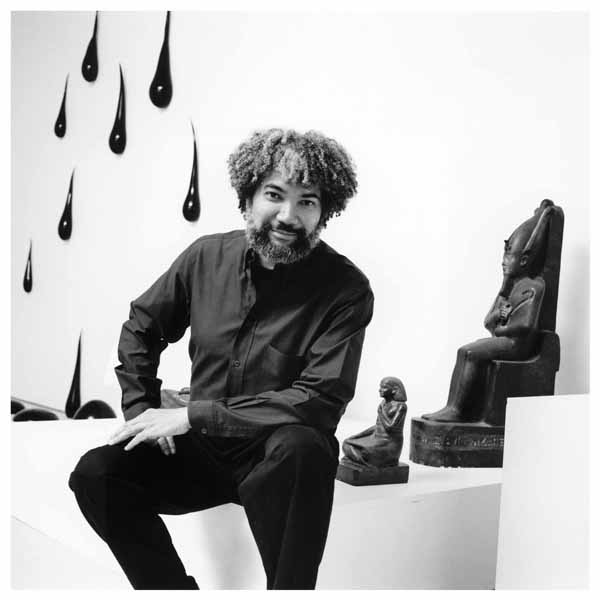 Fred Wilson, an artist best known for his role in refiguring the representation of race in museums, will join New Orleans-based artist Ron Bechet in conversation at the 2019 Donna Perret Rosen Lecture in Stern Auditorium.

The talk is free with museum admission and limited to 180 seats.

▶ READ AN INTERVIEW WITH FRED WILSON IN NOMA MAGAZINE

Fred Wilson was born in the Bronx in 1954, and lives and works in New York. He received a BFA from Purchase College, State University of New York. Commenting on his unorthodox artistic practice, Wilson has said that, although he studied art, he no longer has a strong desire to make things with his hands: “I get everything that satisfies my soul from bringing together objects that are in the world, manipulating them, working with spatial arrangements, and having things presented in the way I want to see them.” Thus, Wilson creates new exhibition contexts for the display of art and artifacts found in museum collections—including wall labels, sound, lighting, and non-traditional pairings of objects.

His installations lead viewers to recognize that changes in context create changes in meaning. While appropriating curatorial methods and strategies, Wilson maintains his subjective view of the museum environment and the works he presents. He questions (and forces the viewer to question) how curators shape interpretations of historical truth, artistic value, and the language of display—and what kinds of biases our cultural institutions express. In his groundbreaking intervention, Mining the Museum (1992), Wilson transformed the Maryland Historical Society’s collection to highlight the history of slavery in America. For the 2003 Venice Biennale, Wilson created a mixed-media installation of many parts—focusing on Africans in Venice and issues and representations of blacks and whites—which included a suite of black glass sculptures; a black-and-white tiled room, with wall graffiti culled from texts of African-American slave narratives; and a video installation of “Othello,” screened backwards.

Wilson received a John D. and Catherine T. MacArthur Foundation Achievement Award (1999) and the Larry Aldrich Foundation Award (2003). He is the Distinguished Visiting Fellow in Object, Exhibition, and Knowledge at Skidmore College. Fred Wilson represented the United States at the Cairo Bienniale (1992) and Venice Biennale.

Ron Bechet, a native New Orleanian, is a professional artist and serves as a professor of art at Xavier University of Louisiana. Bechet served as chair of the department for nine years. He holds a B.A. degree in Fine Arts from the University of New Orleans, and an M.F.A. in Painting and Drawing from the Yale School of Art, Yale University. He has served on the board of the Contemporary Arts Center in New Orleans and served as a member of New Orleans Arts Council percent for art committee Public Art Commission Program, NOCCA Institute Board and many other commissions and boards.

Bechet’s work has been exhibited nationally and internationally, culminating in a solo show in the summer of 2015 at the Acadiana Art Center in Lafayette called “Sense of Place” in which he examined the visual culture of the African Diaspora. He has collaborated in pieces and exhibitions with John Scott, with whom he shared studio space for many years. Bechet’s work can be found in the collections of the New Orleans Museum of Art, The Pennsylvania College of Art and Design Museum, and the Ogden Museum of Southern Art.