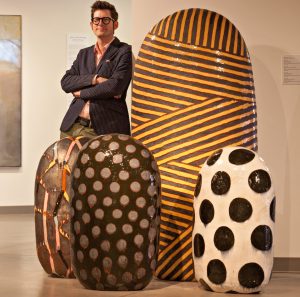 Garth Johnson is curator of ceramics at the ASU Art Museum in Tempe, Arizona.

Garth Johnson is a self-described “craft activist” who serves as the curator of ceramics at the ASU Art Museum in Tempe, Arizona. He will speak at NOMA on Thursday, November 2, at 6 pm in advance of the opening of the exhibition Personalities in Clay: American Studio Ceramics from the E. John Bullard Collection. He is the author of 1000 Ideas for Creative Reuse: Remake, Restyle, Recycle and writes a blog, Extreme Craft, which spotlights other craft artists who defy conventional standards.  Johnson takes an unorthodox approach with his art, including the use of a paintball gun to decorate china and slicing collector plates with a diamond-wire saw to create whimsical collages. He spoke with Arts Quarterly editor David Johnson about his work and the role of craft in the Digital Age.

How do you define that role of a “craft activist”?

The word “craftivism” was coined about a decade ago, and popularized by my friend Betsy Greer. People think of craftivism as using craft’s social structures, or even products, to rally support or awareness for a cause. I enjoy craft with political and spiky edges and projects that use craft for social activism like the Crochet Coral Reef Project, which involved 8,000 artists in a dozen countries crocheting a massive coral reef out of plastic bags and trash. When artists and members of the public participate in a craftivist project, the field of craft also wins through increased engagement and visibility.

I have an obsessive personality, and I’m always looking for ways to insert craft into conversations about … well, anything, really. I believe that craft and making permeates our lives in ways that we don’t always realize. I am now the curator at the ASU Art Museum Ceramics Research Center in Tempe, Arizona, where I put together exhibitions that challenge the public’s conceptions about what craft is or isn’t. We just wrapped up an exhibition entitled Pipe Brothers that paired San Francisco Bay area artist Tom Franco and his brother, actor James Franco, with Mission Clay, an incredible factory in Phoenix that makes enormous terra cotta sewer pipes. The Franco Brothers created a body of work at the factory, and we exhibited more than 16,000 pounds of pipes in total.

Extreme Craft originally started out as a way for me to keep track of other artists who use craft materials in unconventional ways. Like many of my peers, I got an art school education, and using craft materials felt like a way to push back at my professors in the early 1990s, many of whom were carrying the torch for abstract expressionism and minimalism. Truthfully, I thought up that tagline in less than a minute when I was setting up the original blog on Blogspot.com, but it wound up more or less holding true for the rest of the decade.

“Art Masquerading as Craft” refers to people with an art school education who embrace craft materials and strategies. “Craft Masquerading as Art” refers to outsider artists and other fellow obsessives with more obsessive drive than pretentiousness — people like Joanna Lopianowski-Roberts, a Texas woman who recreated the entire Sistine Chapel ceiling in needlepoint. In true do-it-yourself style, she shared the patterns with anyone who cared to follow her down that particular nine-year rabbit hole. “Craft Extending its Middle Finger” is easy. Craft has a long history of being scatological, sexual, or just plain rude.

Over the decade that I wrote Extreme Craft, I gradually realized that the things I was writing about and discovering weren’t exactly new. Eventually, I started dipping my toe into some scholarly writing, and discovered that I had really missed my calling as a curator. I now count myself as a historian of the Studio Craft Movement, and I get to use one of the country’s best collections of craft—at the Arizona State University Art Museum—as my laboratory for exploring these ideas.

In an era when digital creation seems to be leading the way, where does craft fit within the 21st century?

3D printing and digital creation is never as easy as pushing a button. I’ve found that digital artists have to have a deep level of knowledge of process, and even material, to be successful. The story of craft is intertwined with the story of technology and industry. There will always be room for digital artists who explore human touch, as well as makers and crafters who exploit digital tools for creation and fabrication. I have been working with computers since the Apple II landed in my first grade classroom, so I can almost count myself as a digital native.

I tend to reject the narrative that the current explosion of craft and artisanal culture is due solely to a reaction against the ubiquity of computers, cellphones and digital technology. The internet and social media helps propagate craft culture, and craft communities use it to connect and share skills. As of today, the knitting community Ravelry.com has more than seven million registered users.

You decorate china from a paintball gun and chop up collector china with a diamond-wire saw. What is the end product?

I started as a maker, and I’ll probably always have some sort of studio project bubbling. I’m interested in ways that traditional materials and processes can be hacked. I learned classical china painting from a group of ladies in a garage in Lincoln, Nebraska, while I was in college. I was a little bit bored learning to paint roses with careful brush strokes—but the discovery of loading china paint into paintball pellets? That was closer to my style. I’m also a serial overthinker, so using a paintball gun actually let me cut loose, play and get closer to making the art that I actually love and write about. [Read this article by Garth Johnson in Hand/Eye Magazine about his use of paintball guns.] 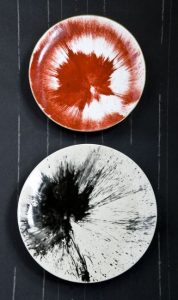 As for my work with a diamond wire saw, I’ve always loved working on thrift store plates, which I cover with decals, text and other decoration. The diamond wire gave me the ability to collage collector plates in the same way that an artist might collage paper. The discovery of the diamond wire saw happened simultaneously with the birth of my first child and a cross-country move to take my first job as a curator, so I haven’t actually gotten into the studio to push that idea further along. Stay tuned! 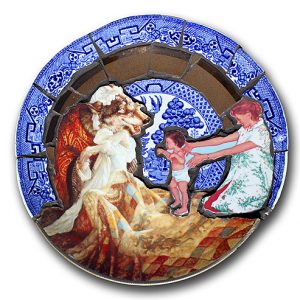 Garth Johnson has begun experimenting with a diamond-wire saw, chopping collector plates and reassembling them in a collage format.