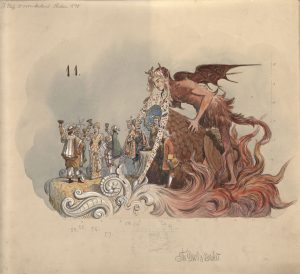 Bror Anders Wikstrom made a name for himself in New Orleans by engaging with the heart of the Crescent City’s creative culture: Mardi Gras. Just in time for the New Orleans tricentennial year Carnival season, NOMA presents Bror Anders Wikstrom: Bringing Fantasy to Carnival, an exhibition that showcases Wikstrom’s float and costume designs from the turn of the twentieth century. This exhibition depicts the grand pageantry of parades from a bygone era, from the regalia of old-line krewes to the whimsical fairies and creatures that bring joy, and maybe some naughtiness, to Mardi Gras celebrations.

Wikstrom elevated the extravaganza of Carnival through his fantastical designs for Mardi Gras krewes in their first decades. He was the chief designer of the floats and hundreds of costumes for the Krewe of Rex from 1885 to 1910, and for the Krewe of Proteus from 1900 to 1910. The exhibition shows the concept for designs as early sketches through the final presentation plates, and as illustrated for the public in large newspaper parade bulletins. Vintage street photography shows how these creations were realized in three dimensions, rolling through the crowds on Mardi Gras day.

A Swedish émigré to the United States, Bror Anders Wikstrom (1854–1909) went to sea in his youth, studied art at the Royal Academy of Stockholm and in Paris, and eventually found his way to New Orleans by 1883. By the time of the Cotton Centennial of 1884, the artist was active in the New Orleans artistic community, first working as an assistant to fellow Swede Charles Briton, a well-known Mardi Gras designer. Until his death in 1909, Wikstrom’s talent found him success as a marine and landscape painter, portraitist, cartoonist, and organizer of the art community.

Wikstrom was one of the founders of the New Orleans Artists Association in 1885, one of the civic groups that sparked the organization of the Delgado Museum of Art (today’s NOMA) in 1910. The artist was so beloved by his contemporaries that his name was carved into the stone on the architectural frieze at NOMA alongside names of great artists like Audubon, Whistler, and Copley. Look for Wikstrom’s name above the courtyard outside the Museum Shop.

Bringing Fantasy to Carnival shows Wikstrom’s seemingly endless imagination for costumed characters within evocative scenes, such as the wild characters from Rex’s 1910 “The Freaks of Fable” parade. These float drawings are on view in the only known bound set of float designs for the Krewe of Rex, on loan from a private collection, and are shown alongside individual “Freaks of Fable” costume designs loaned from Tulane University’s Carnival Collection.

The exhibition is anchored by a wall hung dramatically with a full set of parade float designs from the 1904 Krewe of Proteus parade themed “The Alphabet.” This group of twenty charming plates shimmer with metallic paint and brilliant creativity—from the fierce battle atop the “D for Dragon” float to the glorious rainbow arching the “U for Unicorn” design. In these turn-of-the-century drawings, we see the roots of the fantasy enacted during Carnival season today, when the New Orleans community, whether with a formal krewe or not, turns to their supply of wigs and costumes to adopt a dramatic alter ego.

Bror Anders Wikstrom: Brining Fantasy to Carnival will remain on view in the Stafford Focus Gallery through April 1, 2018.