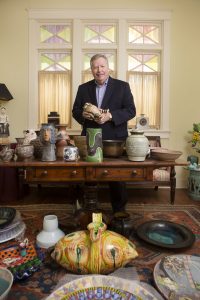 E. John Bullard at home with his collection of contemporary American studio ceramics.

American potters did not invent the idea that a chunk of dirt could be transformed into a glorious piece of art, but in the twentieth century, American ceramists expanded clay’s potential as an expressive art form. NOMA presents a survey of the best of these artists in Personalities in Clay: American Studio Ceramics from the E. John Bullard Collection. This exhibition, on view through July 8, 2018, explores the idea that while American studio pottery can take on many forms aesthetically, and even mean different things theoretically, the movement as a whole unified artists in celebrating the individual potter’s personality as expressed through clay.

American Studio Ceramics are most simply defined as handmade ceramics made by individuals in an artistic studio, as opposed to a factory setting. The remarkable collection of American studio ceramics on view in Personalities in Clay is the result of a lifetime of passionate art study and the keen collecting eye of someone beloved in his community: New Orleans Museum of Art Director Emeritus E. John Bullard. Bullard directed NOMA from 1973 until 2010, and in his retirement he has committed to build a comprehensive survey collection of studio ceramics, all a promised gift to the museum.

During this post-World War II revolution in clay, American potters as varied as the iconoclast Peter Voulkos and the moralistic Marguerite Wildenhain elevated ceramics beyond a history generally contained to the industrial manufacture of functional items. Myriad creative voices took to handmade clay in the name of artistic expression, redefining ceramic’s potential as a potent medium on par with the fine arts. Sharing what they learned through artist networks, potters invented new techniques and reinvigorated nearly extinct traditional ones. They brought ceramics into the university level of art education, advancing clay theory and moving clay from being merely a tool in the production of art to being accepted as a critical art form in its own right.

Englishman Bernard Leach’s 1940 treatise, A Potter’s Book, found a rabid audience with young American potters. Leach’s teachings connected a generation to the Japanese folk ceramic traditions he studied with Shoji Hamada. Through national workshop tours, Leach and Hamada taught master techniques, but also advocated a bigger idea that the independent craftsman was an integrated philosophy of arts and life. Potters like Warren MacKenzie, Karen Karnes, and John Glick followed the Leach ideal and went on to produce soulful and gorgeous functional pottery in idyllic studio settings.

In the mid-twentieth century, the West Coast became a fervent ground for American studio ceramics. In the 1940s, Austrian émigrés Gertrud and Otto Natzler settled into California to experiment with glazes and produce beloved forms celebrated for their quiet grace. Beginning in the late 1950s, the charismatic, radical and deeply skilled Peter Voulkos jolted the ceramics scene from his teaching positions in Los Angeles and San Francisco. His abstract and entirely nonfunctional ceramics brought an intentional rawness and physical energy to ceramics, making the body of the clay literally expressive of the artist’s action with gashes and punches. Following Voulkos were the “California Funk” potters like Robert Arneson, Viola Frey, and Peter VandenBerge who embraced the expressive elements of midcentury art, but doubled down on the antiestablishment rhetoric by interjecting politics, bawdy humor, and sometimes complete irreverence into their artwork.

Personalities in Clay includes vintage videos of master potters at work, including 1955 footage of Voulkos working on a pottery wheel and 1965 footage of Wildenhain’s perfected techniques. These mesmerizing films emphasize the seductive, direct material connection that clay allows the artist. This exhibition of John Bullard’s collection shows all the major voices in ceramics from 1940 to 1990 for the first time at NOMA, highlighting both American studio pottery’s potential for quiet reverence and for bold gestures.

Personalities in Clay: American Studio Ceramics from the E. John Bullard Collection is on view November 4, 2017–April 8, 2018 on NOMA’s second floor in the Elise M. Besthoff Charitable Foundation Gallery. An exhibition catalogue is available in The NOMA Shop. The exhibition is made possible with the support of Catherine Burns Tremaine.