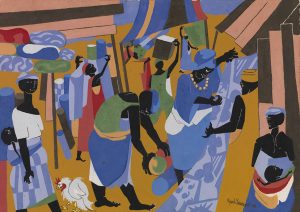 New Orleans (December 12, 2022)—In February, the New Orleans Museum of Art (NOMA) will present Black Orpheus: Jacob Lawrence and the Mbari Club, an exhibition exploring the creative exchange between artist Jacob Lawrence and the members of the Mbari Artists & Writers Club, a Nigerian arts collective founded in 1961. The Mbari Club was an art salon, theater, and studio where artists of all backgrounds gathered to converse and experiment, and the club produced a cultural magazine, Black Orpheus (1957–67), that spread this work around the globe.

The exhibition marks the first time in more than five decades that Lawrence’s little known Nigeria series will be exhibited in its entirety, shining new light on 20th-century modernism by presenting a period in Lawrence’s practice and spotlighting the work of modern artists in Nigeria, across Africa, and throughout the African Diaspora, many of whom still remain under recognized in the United States. The exhibition will be on view at NOMA from February 10 to May 7, 2023.

Black Orpheus: Jacob Lawrence and the Mbari Club presents more than 125 works including paintings, sculpture, textiles, photographs, videos, original letters, and rare publications revealing a global exchange of ideas at a time when people and countries around the world were fighting for independence from colonialism, and when the civil rights movement was achieving success in the United States.

“Co-organizing and presenting Black Orpheus: Jacob Lawrence and the Mbari Club reflects the New Orleans Museum of Art’s commitment to expanding and diversifying public appreciation of African and African American art,” said Susan Taylor, Montine McDaniel Freeman Director of the New Orleans Museum of Art. “The exhibition particularly resonates in conversation with NOMA’s exceptional African art collection and the museum’s recently acquired works by modern and contemporary African artists, adding multiple layers to the dialogue within the Black Orpheus exhibition itself. I want to thank curators Ndubuisi Ezeluomba and Kimberli Gant for opening this new window on the history of modern art, giving us unexpected insights on Lawrence’s practice, and heightening awareness of a group of dynamic and accomplished artists that deserve to be much better known.”

“There is a lack of scholarship surrounding art of the African postcolonial period and the impact of this work on generations of artists in Africa and internationally—a gap we want to address with this exhibition,” added Ndubuisi Ezeluomba, exhibition co-curator and the New Orleans Museum of Art’s former Françoise Billion Richardson Curator of African Art and now Curator of African Art at the Virginia Museum of Fine Arts. “Nigerian artistic modernism drew from both traditional continental practices and Western European practices, creating a new type of expression centered on spiritual renewal and political restoration. The interactions between Lawrence and the artists active in the Mbari Club had a deep impact on the trajectory of his and these artists’ practices and their expression of self representation, freedom, and independence.”

“Traveling to Africa twice in the early 1960s, Jacob Lawrence connected to a vibrant crosscurrent of political and social ideas circulating there, as richly illustrated by the writing and art featured in Black Orpheus,” said Kimberli Gant, exhibition co-curator and the Chrysler Museum of Art’s former McKinnon Curator of Modern and Contemporary Art, now Curator of Modern and Contemporary Art at the Brooklyn Museum. “Those artists, in turn, were adapting and integrating modernist theories of art with their local styles, customs, and life experiences. The results can be seen in Lawrence’s lesser known Nigeria series—and in the remarkable array of works in this show that represent West Africa during a period of transition.”

Black Orpheus: Jacob Lawrence and the Mbari Club is organized in five sections:

During the run of Black Orpheus, NOMA will also present a special exhibition of recently gifted works from the collection of Diane and Charles Frankel, featuring pieces by modern and contemporary artists from the later generations that advanced the path-breaking innovations of the Mbari Club members. Included in Field and Figure: Recent Gifts from Charles and Diane Frankel are important works by Ablade Glover, Owusu-Ankomah, Toyin Ojih Odutola, Pieter Hugo, and Mikhael Subotzky. Framing the entryway to Black Orpheus—and providing additional context through NOMA’s permanent collection, is a site-specific mural by the Philadelphia-based, Nigerian-born artist Odili Donald Odita, whose father was a member of the Mbari Club.

Black Orpheus: Jacob Lawrence and the Mbari Club is co-organized by the New Orleans Museum of Art and the Chrysler Museum of Art.

The New Orleans Museum of Art, founded in 1910 by Isaac Delgado, houses more than 40,000 works of art encompassing 5,000 years of history. The adjoining Sydney and Walda Besthoff Sculpture Garden features more than 90 sculptures, including works by 20th and 21st-century masters.