As part of the Egg Hunt and Family Festival on Saturday, April 1, retired third-generation banker and children’s book writer Allain C. Andry III will read from his first published work, Louie the Buoy (12 – 12:30 p.m.). The inspiration for this tale of a fearless buoy that faces down a ferocious storm was inspired by the author’s nostalgic memories of the Mississippi Gulf Coast, his children’s fascination with spotting the floating maritime guides during summer sojourns, and the wrath of Hurricane Camille. Andry described the nearly four-decade process from imagination to publication that brought the title character to life in this web exclusive for Arts Quarterly. 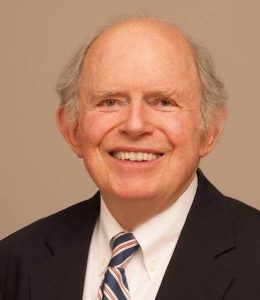 I came up with three children’s stories shortly after Hurricane Camille in 1969. My parents had a home in Pass Christian, [Mississippi],  built in 1948, that looked across the Bay of St. Louis, right at the opening of the massive Jordan River. During the summers, my wife and our three children would go to the Gulf Coast to stay in a cottage on the property and I would commute back and forth, visiting every weekend. Those were wonderful days and my children were in the range of 6, 7, and 8 years old when along came Hurricane Camille. In those days, if you were on the Gulf Coast, you evacuated to New Orleans for safety.

We waited till the storm passed and things settled down for a day, and then we went back over to Pass Christian to view the damage. The cottage that we were in had been absolutely smashed beyond recognition. It was like someone had taken a butter knife and just spread it across the lawn. It was all there, but all spread out. The bigger house, the downstairs was ruined and washed out, but the house was still intact, strong and safe.

We had a pier that went out over Bay of St Louis. In the evenings we would bathe the children, put on their pajamas, and they would all walk on to the pier to watch the  lights of the buoys come on. There were five or six buoys in Bay St. Louis and if you’re familiar with the nautical chart each buoy is distinguished by the number of flashes for each one. The children named the first one that would flash “Louie.” We got home and we were telling the children about all the destruction and that we would rebuild, but their first question was, “What happened to Louis the Buoy?”

That kind of stuck in my head. My parents did rebuild rather quickly, finishing by ’72 or ’73. One rainy afternoon everybody was napping and I was sitting up reading a book and all of a sudden, boy I tell you, I had a legal yellow pad to write on and wrote as quickly as I could, without a lot of stopping, and I wrote the story of Louie the Buoy, the story of a hero in a hurricane.

I thought it was good and I went to Country Day School [in Metairie, Louisiana] to read it to their classes and the teachers would say, “This is a good book.” I also would show it to some of the book sellers around town and they all said, “This is really a good book.” 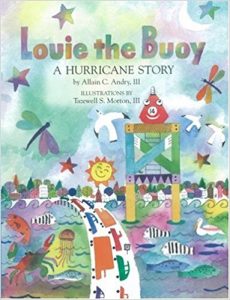 I sent it off to publishing house and of course got no response whatsoever. I finally did get one response from a woman at one of the big New York publishing companies, who is a friend of one of our friends, but I get a letter back saying it’s just a kid’s story but that children these days are too sophisticated to relate to an inanimate object. But what about The Little Engine That Could? Toot the Tiny Tugboat? In 2005, right before Hurricane Katrina, I said to my wife, “I’d like to publish my stories just to have them for the children in particular, but also for the people of the Gulf Coast to remember what the area was once like.” I came upon Michael Ledet, an artist who had been publishing books apparently with the The Historic New Orleans Collection, and we decided to go ahead with it. Tazewell Morton, who is the illustrator, from Gulfport [Mississippi], did a great job and we had a wonderful time putting this book together. My wife Judy helped out with the editing.

We have a good friend, Donna Newton, who was the director of the Children’s Hospital, so Donna had insight as to that sort of thing, too. We had a marvelous time. We had the book printed in China, and it arrived in New Orleans on the Friday before the Monday that Katrina struck! 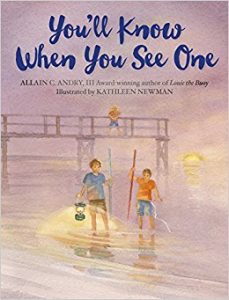 We evacuated and Louie, the first printing of 1,000 copies, went temporarily back to the Port of Houston. The book took on a new meaning after Katrina. Children’s Hospital got the word out that this is a wonderful book because Louie has to face a hurricane. He’s mortified, but he knows he has a duty. He’s very cocky about it, and he tries to do his best. People have said this is a wonderful aide for parents, counselors, and teachers working with children with hurricane distress, kids who have been evacuated and whose schools have been knocked down.

Louie flew off the shelves. We are about to order a fifth printing. We’ve sold over almost 10,000 copies. The Louisiana Philharmonic Orchestra commissioned Tucker Fuller to write an original score for Louie the Buoy that premiered on February 21, 2016, to a full house at Loyola University. It was absolutely remarkable. They had a wonderful local actress, Carol Sutton, who was just superb. She read the story. The illustrations were projected up on the wall and the symphony played a wonderful score.

That’s the story of Louie the Buoy, the leader of the pack. I was given the gift of Louie and I would love to publish a couple more stories.

Allain Andry retired from Fidelity Bank in 2015 after serving on the board of directors since 1972, following in the footsteps of his grandfather and father. He served as Chairman of the Board from 1987 until 2010. In addition, Andry served as Fidelity’s Attorney and Chief Legal Counsel for over 50 years. He published Louie the Buoy in 2005, followed by You’ll Know One When You See One in 2016, a story about a father and daughter spearfishing for flounder in the Gulf, which will also be read at the family festival. The final children’s book in the trilogy, Oh Michael, That’s Not a Knot, is next to be published.