Members of the Rex Organization, New Orleans’ oldest parading krewe (established in 1872), presented the theme of their 136th annual Mardi Gras parade at a media luncheon on January 31. NOMA’s lobby atrium served as the regal setting for this annual event that introduces the title lineup of exquisitely crafted floats. In a timely homage to NOMA’s exclusive exhibition, A Life of Seduction: Venice in the 1700s, which includes numerous paintings, masks and costumes related to 18th-century pre-Lenten festivities in the Italian city, Rex has titled its 2017 procession “Carnival Fêtes and Feasts.” All 26 floats will take to the streets of New Orleans on the morning of Fat Tuesday, February 28. 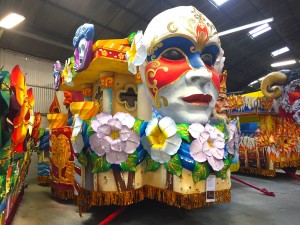 The Venice Carnevale float in the 2017 Rex parade is one of 26 themed after Carnival celebrations around the world.

The floats, built atop wooden wagons that hark back to the krewe’s 19th-century origins, depict famous and lesser-known Carnival celebrations in cities from across the globe, including Venice, Rio de Janeiro, Quebec, Louisiana’s Acadian parishes, Mohács, Hungary and Mobile, Alabama. Plans are underway to display elements  from the Venetian Carnevale float at NOMA in the weeks following the parade. The Rex Organization, also known as the School of Design, will also assist NOMA’s eduction department in creating study materials related to float, costume and tableau ball artistry.

Rex members and journalists were treated to a rare behind-the-scenes tour of A Life of Seduction by curator Vanessa Schmid as 53 crates containing objects from 15 Italian museums prepare to be unpacked and installed in NOMA’s galleries for the exhibition’s opening on February 17. Paintings, costumes, Murano glass, boat models, coins, needlework, ladies’ accessories, marionettes and a puppet theater will be among the treasures displayed through May 21, 2017, many of which have never been seen in the United States.