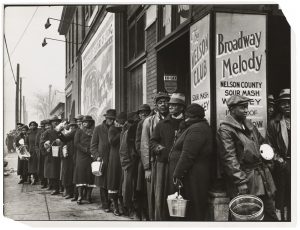 In the winter of 1937 the Ohio River overran its banks and flooded the land between Pittsburgh, Pennsylvania and Cairo, Illinois, killing almost four hundred hundred people and displacing approximately one million. Communities in the path of the floodwaters were already struggling in the depths of the Great Depression, and few cities were more inundated than Louisville, Kentucky. Margaret Bourke-White took this photograph while on assignment for Life magazine, documenting the damage and early humanitarian efforts around the city. On the long wall above the line of people waiting for aid from the Red Cross appears a billboard from the National Manufacturers Association (The billboard is more clearly visible in the lead photo published for Bourke-White’s Life photo-essay, which you can view here). In this photograph you can still read the banner on top: “World’s Highest Standard of Living.” Underneath, a smiling white family rides in their touring automobile past another rosy slogan: “There’s No Way Like the American Way.” Less well- known than Bourke-White’s lead photograph, her camera’s vantage in this version gives a sense of perspective and lets us know just how long the queue of displaced people extended down the street. Bourke-White captured a stunning contradiction between the column of African American citizens desperate for necessities as basic as fresh water, and a vision of American prosperity from which they were implicitly excluded. While the 1937 Ohio River flood affected everyone in the region that winter, this photograph underlines the reality that during a crisis some communities are more vulnerable than others.

Margaret Bourke-White served as the first female staff photographer at Life, and her picture of the Fort Peck Dam became the cover image of the very first issue in 1936. Her coverage of both industry and poverty during the Great Depression made her work some of the most dynamic and varied of the era. During World War II she worked as a correspondent in Europe, photographing combat zones and the upheaval of civilian life with clarity and depth.