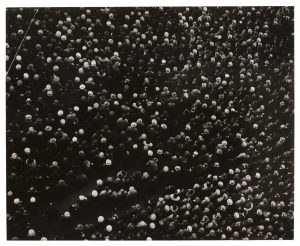 In this photograph, Arthur Siegel captures the visual power of people united by a common cause. At different times in his career, Arthur Siegel worked as a photojournalist and documentarian, and as an artist who explored various methods of photographic abstraction. This image seems to combine these disparate approaches, documenting a demonstration even as it threatens to reduce the demonstration’s participants to repetitious formal elements. Made in his hometown of Detroit, The Right of Assembly affords a bird’s-eye view of members of the United Automobile Workers striking against Chrysler’s institution of higher production speeds. Siegel’s title suggests that his sympathies lay with the demonstrators—or, at the very least, with their right to demonstrate. His choice of vantage point is also laden with political meaning, recalling other radical forms of social photographic engagement from earlier in the century. Alexander Rodchenko, among others, had advocated for unusual photographic perspectives as revolutionary forms of vision, and he had relegated the more traditional view from the ground as a result of bourgeois experience. Politics aside, Siegel knew how to make a great picture, and the sea of hats here almost dissolve into an abstract field of light and dark, as if foreshadowing some of his later experiments with photograms.