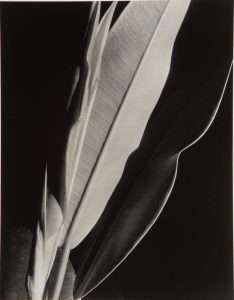 Although Imogen Cunningham’s earliest photographs were soft-focused, often ethereal studies of friends presented as allegories, she would become best known for images such as this one, which presented forms in nature or the human body as richly descriptive statements of fact. Trained as a chemist at the University of Washington, Cunningham also went on to a grant-funded sojourn in Dresden, Germany, where she published a thesis on the platinum printing process. As a result of these formative experiences, Cunningham was well schooled in the craft of printmaking, a skill that would set her apart from many of her contemporaries. In this print, the light and dark contrast of this dramatically lit rubber plant allows for a complete description of several different parts of the specimen. In one single image, Cunningham collapses multiple perspectives: one leaf is turned parallel to the picture plane, revealing a network of veins, while another is turned obliquely, its thick edge traced by the raking light.