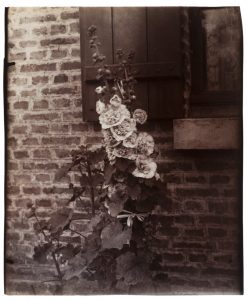 The rose trémière, or hollyhock, is a classic summer bloom with flowers arranged vertically on long stems. Eugéne Atget came across this hollyhock in a Paris, where he roamed the streets with his view camera every morning. Beginning about 1890, Atget made “documents pour artistes”: straightforward photographs of buildings, parks, flowers, and sculptures that he sold to painters, architects, and theatrical designers to use as model images.

Hollyhocks grow in a variety of rich colors, coincidentally significant because one of the most exceptional qualities of this Atget print is its beautiful bronze tone, that also registers as a light purple. Atget used a printing out paper (or POP), a photographic paper popular beginning in the 1880s that became a kind of technological bridge between the older albumen silver papers and modern gelatin silver emulsions. Atget would have placed his negative and the paper together, placed them in the sunlight (necessary for both plants and photos at the time!), then washed the paper in chemistry that enhanced the tone and permanently fixed the image. It is likely that this particular photograph was grouped in an album with other photos of flowers, and sold to a painter or even a gardener.

At about the time he made this photograph, Atget’s focus was shifting more strongly towards recording the redevelopment of Paris, as medieval elements were torn down for modern architecture and streets. Atget continued to make documents for artists, but his photographs of vieux Paris are ultimately the works for which he is most well-known today. As it stands, this work from the first decade of Atget’s career is a delicate vision that can transport the viewer to a Paris cottage garden.