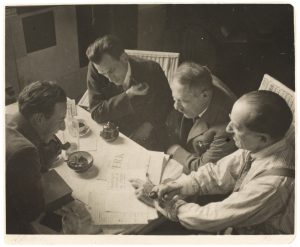 In only his second year in Paris, after moving there from Hungary, André Kertész received an invitation to visit Piet Mondrian’s apartment and studio. There, he was immediately immersed in an international and multidisciplinary arts community where he convened and conversed with artists, writers, and architects, many of whom, like him, were recent transplants from other corners of Europe. This image, for example, brings together (from left to right) the Belgian painter, writer, and critic Marcel Seuphor; the Lithuanian poet and publisher Juozas Tysliava; the Dutch film director and musician Louis Saalborn; and the elderly Dutch painter Mondrian. The men pore over some texts, including handwritten manuscripts, a printed version of one of Seuphor’s recently published and Dada-inspired collection of poems, and the Swiss art journal Das Werk. In taking the photograph, Kertész leans over the artists and includes a fragment of sharply delineated colored squares on the walls—Mondrian’s transformation of his space into the living embodiment of his own paintings. Of the artists present that day, Seuphor (who abandoned his given name Louis Ferdinand Berckelaers in favor of an anagram for Orpheus), Tysliava, and Kertész had all arrived in Paris in 1925. With such a transnational collection of figures, all ostensibly interested in the various languages of their own mediums, perhaps the lack of a common verbal language mattered little. After all, it was in the cramped spaces of studios such as this one that the visual languages of several modernist movements were forged, tested, and pushed to their limits.