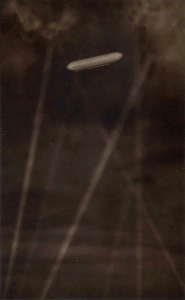 On September 3, 1916, Lieutenant William Leefe Robinson of the Royal Air Force was on night patrol in his biplane, when he spotted the wooden-framed Schütte-Lanz airship outside of London. It was one of sixteen that had launched from Germany for the largest air raid over England. Robinson first lost the airship in the clouds, but found it again and made three attack runs on it. During the third, the airship burst into flames and crashed into a field. Robinson, who landed his badly damaged plane, became a national hero as he was the first pilot to successfully down a German airship.

Little did he know at the time, the entire event had been witnessed, and recorded, by H. Scott Orr in a set of photographs produced from the ground. The photographs proved so popular that they were ultimately issued as a set with some descriptive text, and then even transformed into a group of souvenir postcards, which is what the objects in the museum’s collection are. Robinson’s celebrity status made authorities reluctant to let him continue to fly, for risk of his life, but he ultimately resumed active service in April 1917. On his first flight, he was shot down by a German pilot and taken prisoner for a year and a half. Shortly after his release, he contracted influenza (during the 1918 pandemic) and died at the end of that year.

These prints and many more are currently on view in NOMA’s current exhibition A Brief History of Photography and Transmission.