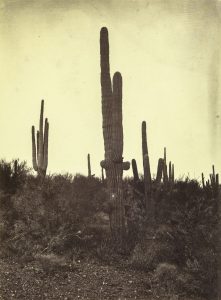 During the Civil War, Timothy O’Sullivan made a name for himself photographing army camp life and Eastern landscapes destroyed by cataclysmic battles. In 1871 O’Sullivan enlisted in the U.S. Corps of Engineers for a series of expeditions to map the lands west of the 100th meridian, commonly referred to as the Wheeler Survey (after leader Lieutenant George Wheeler). In addition to topographic maps, the expedition’s participants were charged with cataloging flora and fauna, significant geological features, and making record of Native American groups. From the outset, photography would be an important part of the survey. O’Sullivan and a colleague made hundreds of negatives over several years. Intended to be objective documents, O’Sullivan’s Wheeler Survey photographs also capture the majestic scale and rich natural beauty of what would become the American West.

The saguaro cactus (Cereus Giganteus) is native to the Sonoran Desert regions of Arizona and Mexico. Today, the saguaro’s profile—tall and spindly with multiple “arms”—is so iconic that it functions as a kind of visual shorthand for the Southwest. In the 1870s however, the massive succulents would still seem spectacular to many Americas back East. O’Sullivan’s photograph provided evidence of the incredible size of the cacti, which routinely reach fifty feet in height and can live for two hundred years. Though he is partially obscured by brush (and blending in to the background because of the tone of the print), we can see that O’Sullivan posed a colleague in the right foreground to give some sense of scale. Saguaros constitute an important part of the Sonoran ecosystem, providing food and shelter for many animals and nutrients for the thin desert soil. This richly textured photograph illustrates how the cacti fit into that landscape and where, reaching skyward, they punctuate our view of the horizon.