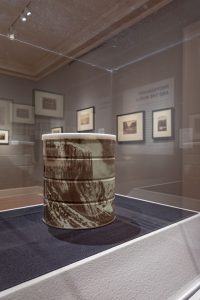 Photographer Ansel Adams is famous around the world for his dramatic black-and-white landscape photography, in particular views of the American West.

Self-taught, Adams played an outsized role in the history of American art photography. He helped found Aperture magazine and the Center for Creative Photography in Arizona, and served as an advisor during the beginnings of the photography program at the Museum of Modern Art in New York. In the early 1930s, Adams was also a founding member of Group f/64, a collective of photographers (including Imogen Cunningham and Edward Weston) who helped to define American modernism through their preference for precise focus and attention to composition.

Regardless of his “fine art” bona fides, most people first encounter Adams’ photographs in the worlds of commerce and popular culture. His dramatic photography has appeared in countless calendars, print advertisements, t-shirts, dorm-room posters, and in this example, a can of ground coffee.

Adams was an environmentalist who began photographing the landscape of Yosemite National Park, located on the land of the Ahwahnechee people, early in his career. One of his first paying jobs was with the firm that operated concessions in the park, and Adams made photographs designed to draw more visitors, while perfecting his own technique. In later years, Adams’s spectacular photographs became self-evident arguments for environmental protection and preservation, and he worked closely with the Sierra Club. 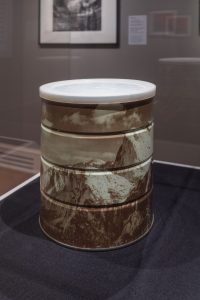 In the 1960s, the market for art photography as we know it today did not exist, and Adams supported himself by selling as many prints as he could, working for companies like Kodak, and occasionally, partnerships with firms like Hills Brothers Coffee. The company was founded in San Francisco in the nineteenth century and was one of the largest sellers of coffee in the US when they contacted Adams about putting his photograph Winter Morning, Yosemite Valley, California on their three-pound coffee cans around 1969.

Adams saw commercial ventures like this one as a way to get his photography into more people’s hands. Hills Brothers saw it as savvy marketing. (The original lids for the cans read “Head for the Hills!”) However, not all of Adams’s peers appreciated his commercial collaborations. Imogen Cunningham famously expressed her judgement by sending Adams one of these cans emptied of coffee, but refilled with soil and a live marijuana plant.

Straddling the line between what we now think of as fine art and consumer culture, this “canned” version of Adams’ Winter Morning, Yosemite Valley, California, is a fun example of the many methods people have invented to transmit photographs from one place to another. It is currently on view at NOMA as part of the exhibition A Brief History of Photography and Transmission through January 2, 2022. To learn more about Ansel Adams, check out Making a Photographer: The Early Work of Ansel Adams by Rebecca A. Senf, available at the NOMA Museum Shop.