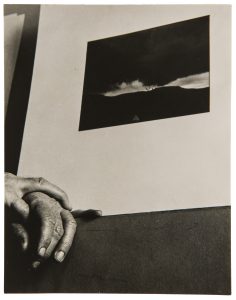 Dorothy Norman was only twenty-two years old when she walked into the Intimate Gallery and met Alfred Stieglitz, then sixty-three. Although they were separated by more than forty years in age, and despite the fact that each was already married, their physical and emotional relationship quickly blossomed. So profound was their connection that Stieglitz once wrote to her, “You know me. … You are the only one who does or ever did—or ever will—completely.” In return for the faith he placed in her appraisal of him, Norman became the custodian of his legacy, writing his biography and publishing accounts of the role he played in introducing modernism to American audiences. Stieglitz’s unwavering conviction in art’s ability to shape a society cultivated a number of devotees, in an almost shamanistic way. Norman was foremost among them, once explaining: “I believed in the thing he was.”

Norman was never a professional photographer, but her intuitive understanding of picture making—and her ability to visually capture the character of her closest subjects, in particular—is readily apparent in the body of portrait photographs that she left behind. With Stieglitz, those portraits sometimes adopted an indirect or symbolic form of representation. Here, for example, her mentor and lover is elegantly reduced to his product—the photograph—and the hands that produced it. Because Stieglitz had spent years promoting the idea of photography as a form of personal craft and not machine work, this picture is succinctly poetic.